Neuromancer was a work of incredible imagination and creativity. The novel has become iconic of the cyberpunk genre and has a serious series of accolades to accompany its street cred. I’m quite disillusioned with the cyberpunk fashion that is currently commercially available. Most of it seems closer to high fashion for people who are lucky enough to look like models than the uniform of a cyberpunk. What pops up in a typical search for cyberpunk fashion seems to me neither cyber, nor punk. With that in mind, I decided to read through Neuromancer paying particular attention to the fashion. Consider this my own trip back to the source. It occurs to me that many writers, designers and fans might also find a compilation and analysis of the fashion described in Neuromancer useful. 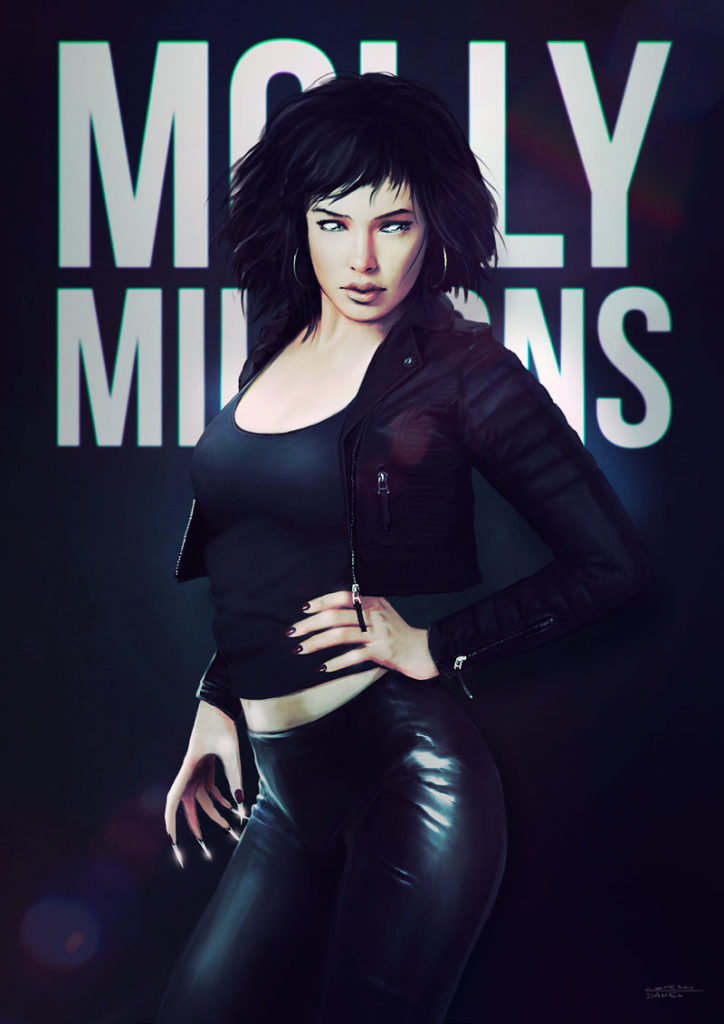 Molly is the tough razor girl to contrast Case’s cerebral nature. She is the character described in the most detail throughout the novel. She is described as wearing mirrorshades which upon first glance might look like mirrored sunglasses. Molly has razor sharp retractable blades hidden under burgundy finger nails and wears leather jeans and a black jacket. Distilled down, she is beautiful, feminine bad assery.

“She wore mirrored glasses. Her clothes were black, the heels of her black boots deep in the temper foam.”

“…the glasses were surgically inset, sealing her sockets. The silver lenses seemed to grow from smooth pale skin above cheekbones, framed by dark hair cut in a rough shag. The fingers curled around the fletcher were slender, white tipped with polished burgundy. The nails looked artificial.”

“She wore tight black glove leather jeans and a bulky black jacket cut from some matte fabric that seemed to absorb light.”

“She took off her jacket, the fletcher hung beneath her arm in a black nylon shoulder rig. She wore a sleeveless gray pullover with plain steel zips across each shoulder. Bulletproof, Case decided, slopping coffee into a bright red mug.” 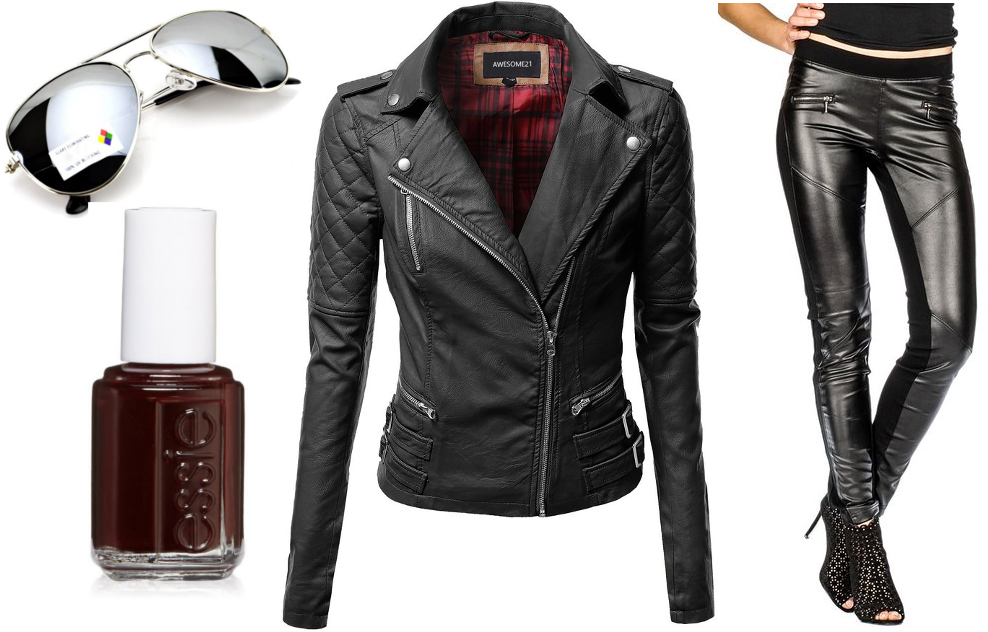 From this description, we get a fairly complete look at Molly’s typical outfit. This is Molly’s baseline for Neuromancer (the other novels that Molly is in are still on my reading list so I can’t comment on those). Her clothes change, much like her name, depending on the job at hand and the crew she’s running with.

“She hooked thumbs in the belt loops of her leather jeans and rocked backwards on the lacquered heels of cherry red cowboy boots. The narrow toes were sheathed in bright Mexican silver. The lenses were empty quicksilver, regarding him with insect calm.”

This is one example why this exercise turned out to be so interesting. I would not have pictured Molly wearing red cowboy boots. This harkens back to the Wild West undertone to cyberpunk (the digital frontier and console cowboys) and 80s punk fashion.

“She’d zipped herself into an old surplus vest with a dozen oddly shaped pockets and put on a huge pair of black plastic sunglasses that completely covered her mirrored insets.”

“She wore a pink plastic raincoat, a white mesh top, loose white pants cut in a style that had been fashionable in Tokyo the previous year.”

These descriptions of Molly between Chiba City and Straylight show some alternatives to what Gibson imagined cyberpunks wearing. Black mesh t-shirts and army surplus vests seem like excellent, accessible options for the modern cyberpunk. 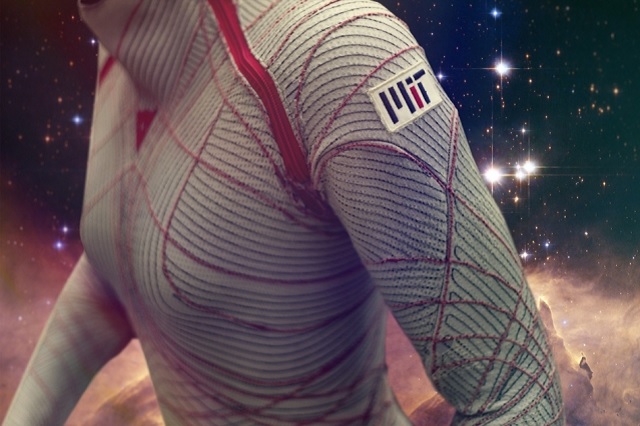 “…and she stretched her leg, kneaded the flesh of her thigh through Modern polycarbon and Paris leather…”

“He saw enough of her arms and hands to know that she wore the polycarbon suit again. Under the plastic, he felt the same familiar tension of thin tight leather. There was something slung under her arm in a hardness or holster. She stoop up, unzipped the suit and touched the checker plastic of a pistolgrip.”

The polycarbon suit during the infiltration of Straylight seems the most sci-fi of her outfits.

For the main character, surprisingly little description is given of Case’s outfits. There is just as much description of his thin, high shouldered frame and his unkempt facial hair as there is of his clothing.

“‘You’re breaking my heart, Ratz.’ He finished his beer, paid and left, high narrow shoulder hunched beneath the rain-stained khaki nylon of his windbreaker.” 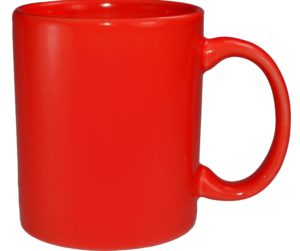 “’Icebreakers,’ Case said, over the rim of the red mug.”

“Case gulped the last of his coffee, settled the trodes in place, and scratched his chest beneath his black t-shirt.”

After repeated description of this bright red coffee cup, I find myself in need of such a cup. Maybe no one will get the reference but me and it’s certainly not as iconic as the Blade Runner whiskey glass, but I will sip from it and smile. 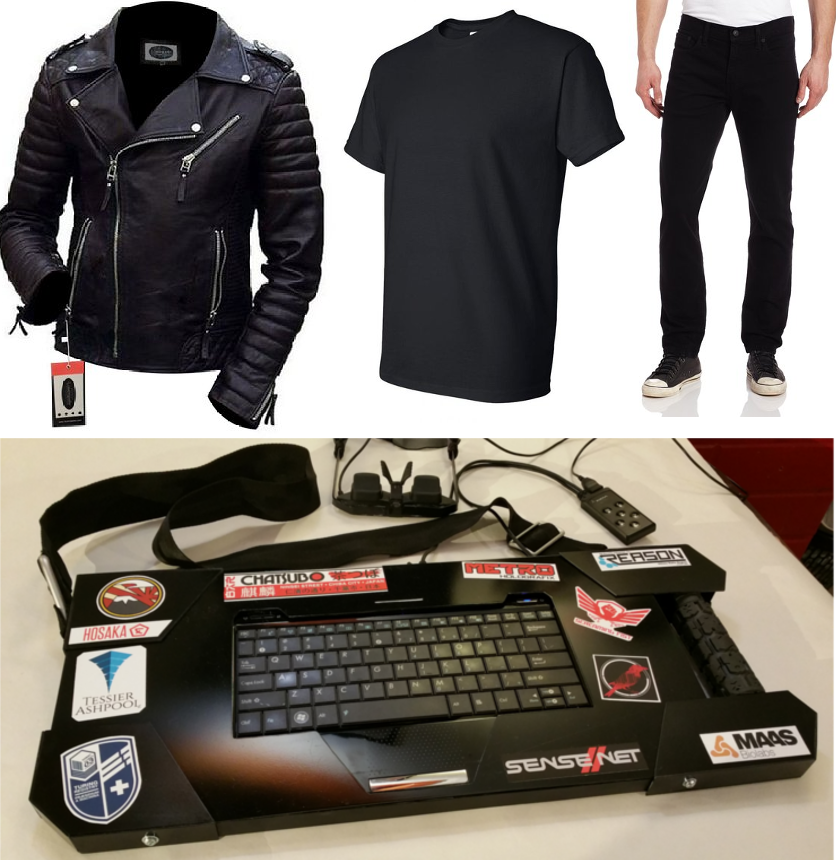 “Thin, high-shouldered, a forgettable face beneath short dark hair. He needed a shave, but then he usually did.”

“With the deck, construct, and improvised shoulder strap suspended in front of him, he struggled into his leather jacket, checking the contents of his pockets.”

“He rounded the corner of the bunker and walked toward the surf, dropping his jacket on the sand…. He peeled off his jeans and kicked them into the shallow surf, following them with t-shirt and underwear”

“And found himself staring down, through Molly’s one good eye, at a white-faced, wasted figure, afloat in a loose fetal crouch, a cyberspace desk between its thighs, a band of silver trodes above closed, shadowed eyes. The man’s cheeks were hollowed with a day’s growth of dark beard, his face slick with sweat.
He was looking at himself.”

From the descriptions listed here, it seems that Case was meant to have dressed like any normal 80s punk and the standard attire of black jeans, black t-shirt and black leather jacket. This is normal attire even years later (just add cyberdeck). 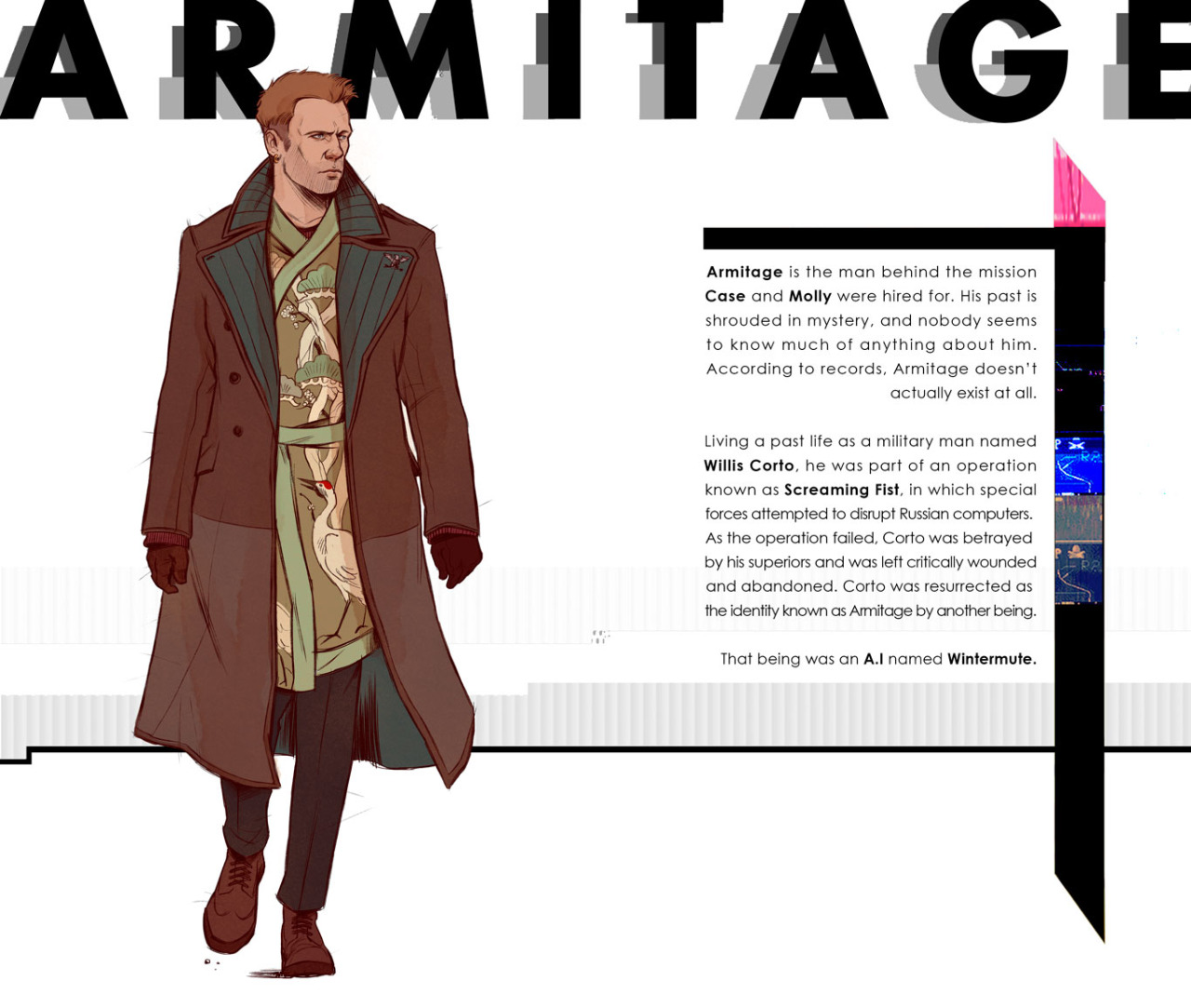 Armitage seems the patron of the team until it is revealed that he is every bit the pawn that Case is. 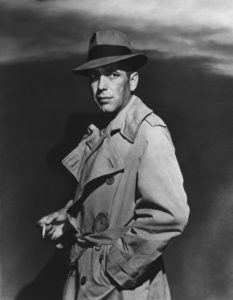 “The dark robe was open to the waist, the broad chest hairless and muscular, the stomach flat and hard. Blue eyes so pale they made Case think of bleach.”

“He wore a somber Italian suit; in his right hand he held a briefcase of soft black calf.”

“He wore a white dinner jacket. On his lapel, blue coals burned in the depths of a black carnation.”

“For some reason, he imagined him in his dark Burberry, the trench coat’s folds spread out around him like the wings of some huge bat.”

The descriptions of his attire is somewhat more refined and old fashioned. It harkens back to the film noir that is found in iconic films like Blade Runner. As Case and Molly are to the leather jacket, Armitage is to the Burberry trench. If you want to dress like Armitage, you better be bank rolled by an AI. 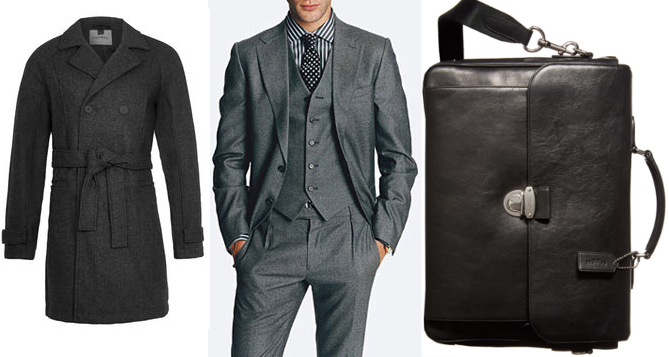 Linda is the former girlfriend of Case whose death instigates some of the drama early in the book.

“The rain kept up, falling along Harajuku, beading on her plastic jacket…”

“He looked up, met gray eyes ringed with paintstick. She was wearing faded French orbital fatigues and new white sneakers.”

“The sleeves of the blue zip suit has been ripped out at the shoulders; he automatically checked her arms for signs of terms of the needle.”

“Her dark hair was drawn back, held by a band of printed silk. The pattern might have represented microcircuits, or a city map.”

Maelcum is the pilot of the Marcus Garvey and helps Case break into Straylight. He is a citizen of Zion, a Rastafarian settlement.

“His dreadlocks were like a matted tree with branches the color of steel wool.”

“Maelcum was already making his way up the rings, pulling himself up with his left hand, the Remington in his right. He wore a strained pair of baggy fatigues, his sleeveless green nylon jacket, and a pair of ragged canvas sneakers with bright red soles.”

I wonder if Maelcum’s dreadlocks contributed to cyberlox becoming a part of the cybergoth culture.

There is not much description given of Riviera, most of the narrative is about the holograms that he can create with his implants.

I think the fanart by Nathan Anderson particularly captures this. Want to dress like Riviera? Try going to prison (not really). 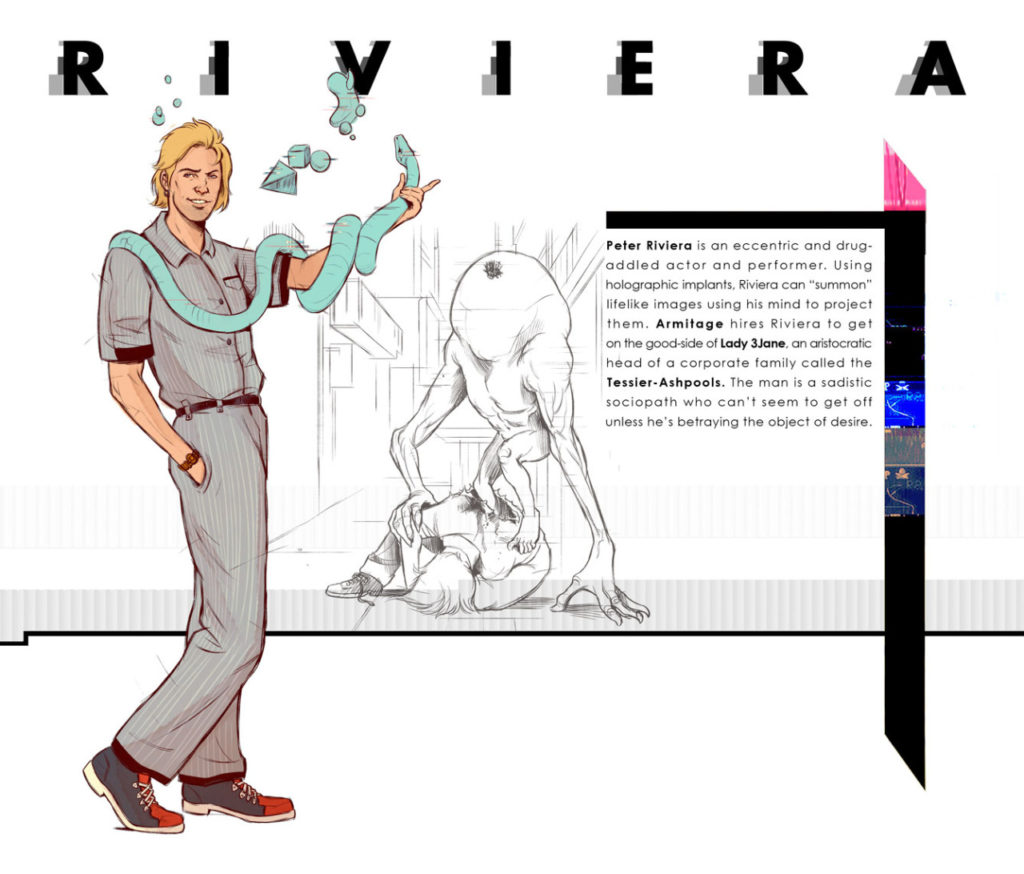 Ratz is the bartender at the Chatsubo, one of the first characters we meet in the novel.

“The bartender’s smile widened. His ugliness the stuff of legend. In an age of affordable beauty, there was something heralding about his lack of it. The antique arm whines as he reached for another mug. It was a Russian military prosthesis, a seven-function force-feedback manipulator, cased in grubby pink plastic.” 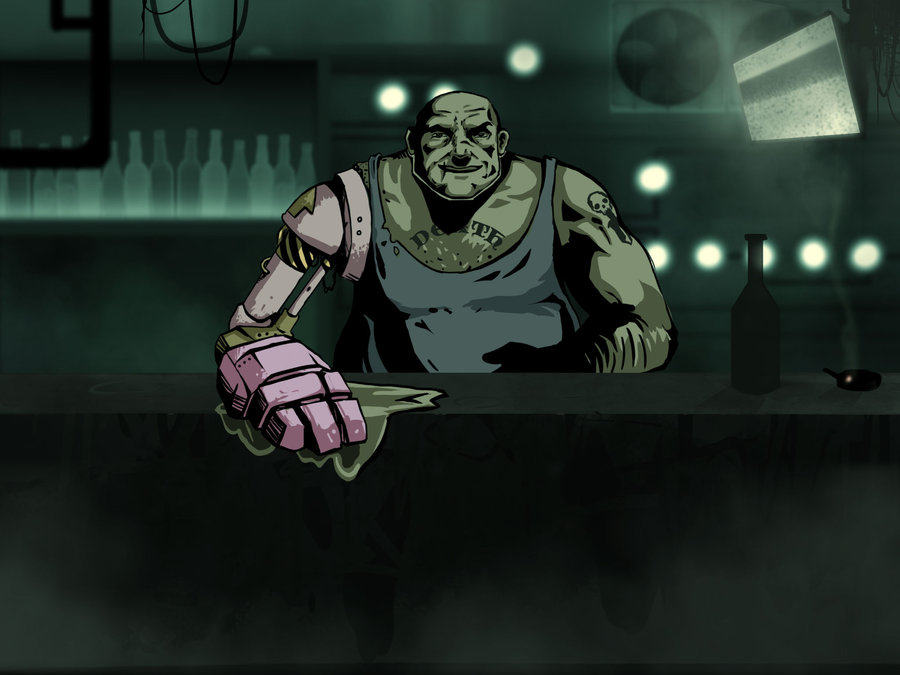 Much of the fashion in Neuromancer is based on a combination of what was popular at the time, especially in music culture, with influences from comics, noir, westerns and science fiction. What Gibson wrote into his descriptions gives us insight into what he thought cyberpunks of the future might look like. Although Neuromancer was written more than 20 years ago, going back to the source material can give us fresh ideas about cyberpunk fashion now.

Written by Silicon Sepulchre
Silicon Sephulchre is a chemist with a passion for cyberpunk. Steeped in tech and nerdom from an early age, she embraces the high tech, low life existence. Don't turn your back on her; she's trained to use CRISPR.
Previous ArticleA Conversation with Mike Pondsmith, Creator of Cyberpunk 2020Next Article‘What could be a more genuine case than a murder investigation?’: A Review of Independent Investigators Inc.
You May Also Like