This article attempts to discover whether virtual reality is merely an experience one can have through a pair of goggles, or if it is somehow already present in our lives today. 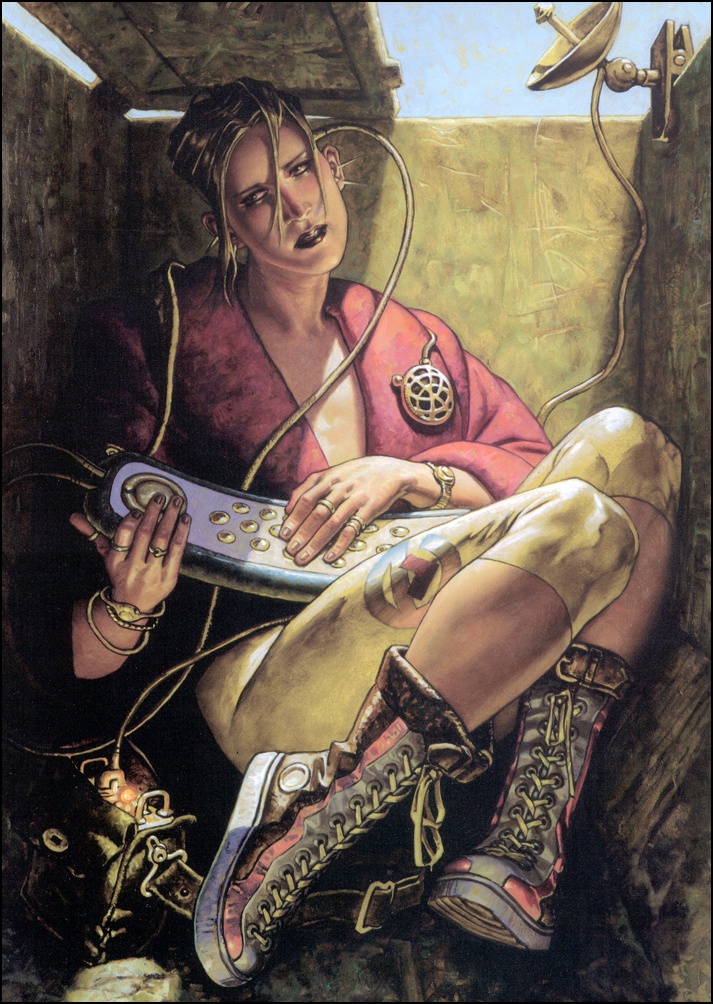 What do we know about existence? Existence can be narrowly defined as something that “is” as opposed to something that “is not”. Today many live in both a physical and non-physical virtual world, and it would seem that the division between the two is becoming ever more entwined through the use of technology.

“I think Sebastian, therefore I am.”

Another way we can perceive what we know about the world around us is through the idea of reality. But what is reality? It can be viewed as different states of being, or varying degrees of what appears to be. Let’s put it into terms that apply to cyberpunk which is what we’re all here for, right?

A recurring theme in cyberpunk is that of the corporation, the machines or some other over-arching mechanism or agent through which the lives of those in the stories we know are controlled by. We see examples of people being manipulated by corporate interests, governments, criminal organizations and many other entities. In a sense their reality is managed or controlled by the forces around them. But this reality as it has been laid out for them, is not necessarily an accurate indication of their existence, or even for that matter, who they are inside. We can look at the antagonists of the film Blade Runner as an example. We see Replicants who’s lives are cut short because after a certain age they begin to think for themselves – a sense of self awareness tends to rise – which is problematic for those who mean to control them. What would it be like to live that way; to have your potential stripped away before you’ve had a chance to explore it?

In order to break free of these circumstances, we sometimes see the protagonists in cyberpunk films and books attempt to rebel against the system they live under. We see this in real life too, there are some that refuse to lay down and accept that what they have been told is the truth, that perhaps smoking isn’t good for us, or that peace is better than war. We sometimes see that our view of things can be confused by media for instance. Take the book 1984 into consideration. In George Orwell’s novel, there is the notion that the state has “Always been at war with Eastasia” though the reader will understand this is not true, and that only through Doublethink – that is, believing in two contradictory ideas simultaneously – can the belief in an eternal war with a nation that just yesterday was our ally, can be reconciled. The idea here is that through media manipulation, and even total fabrication, people can be made to believe in almost anything should the information be consistent and repeated. These attempts through media, propaganda, or by any other means can be viewed as a form of virtual reality in a sense. Imagine a simulated world that in every way and in every detail is like our own, and that world perfectly overlays our own. Now imagine that every interaction, every experience one can have within it, is based in this virtual world, it is in effect everything we know and see. Would we not at some point begin to see that the simulation is suddenly more important and in fact more real, than the one in which we truly exist? Given enough time, how would we even know the difference?

This is an irritating example but one that most of you will know from a recent trend. Take the case of the “black and blue striped dress VS the gold and white striped dress”. Think about what colors you saw, imagine now that everyone around you said that what they saw was in fact the other two colors and not the ones you were seeing. Would you be inclined to think eventually that something was wrong with your perception or that maybe they were right and that somehow you weren’t seeing what you were seeing? We can be made to believe that fiction is reality and vice versa, especially when the message is from an authority figure. For instance, the idea that individuals cannot make a difference in this world is a false one. But common knowledge could lead one to believe that we need a huge movement to make changes to the system, the corporation, or whatever force we see as controlling or influencing our lives as individuals. For many, it’s enough to just be left alone.

“There will be, in the next generation or so, a pharmacological method of making people love their servitude, and producing dictatorship without tears, so to speak, producing a kind of painless concentration camp for entire societies, so that people will in fact have their liberties taken away from them, but will rather enjoy it, because they will be distracted from any desire to rebel by propaganda or brainwashing, or brainwashing enhanced by pharmacological methods. And this seems to be the final revolution.”

It would seem the more pleasurable these “virtual” realities are, the more willing we are to be subjected to the rigid confines which they represent. Some are even willing to defend these realities violently. But what happens when we become passive consumers of this kind of information, when we allow outside forces to control our decisions,  effectively using our very lives to continue to power the forces that we find ourselves pinned under? At this point the virtual, begins to effect the real in a more profound way. We know that events in social media effect real lives, and that news cycles dictate public opinion in many facets of life. The freedom of information and it’s free flow are a huge benefit to society, and we are fortunate to live at a time where diversity, and a difference in opinion are still considered rights and not privileges. But just as this information has become available to so many, there are others that would attempt to retain control over society, through diversion, fear, advertisement and division. I recall certain chemical weapons and Nigerian yellow cake never being found in Iraq but, nonetheless, we went to war. We make choices for ourselves based on the quality of information we receive, but how good are our decisions if we don’t really know and understand the facts they are based upon? One only has to watch an early cigarette commercial to see that the virtual is sometimes more convincing than the reality of a thing, but it only works on those who are ignorant of the alternatives.

“The individual has always had to struggle to keep from being overwhelmed by the tribe. If you try it, you will be lonely often, and sometimes frightened. But no price is too high to pay for the privilege of owning yourself.”

In cyberpunk there is a strong current of individuality amongst many of it’s best known characters. These people may not be particularly strong, altruistic, or even good, but they are willing to go out and effect change on their own terms. Sometimes this effort is futile, but that is outside the point. The important thing is not the act of tearing down the system from the outside, it is the changes these people make in their own minds that counts for more. They no longer see their own obstacles, what they see is potential, thus allowing them to be truly free. For us this means that the status quo, does not tell you who or what you are. That’s up to you to discover.

We see many instances in cyberpunk where the characters act in self interest, and do not share their realizations if they even had any. We have witnessed many cyberpunk characters rise to olympian heights, only to be thrown down by their own hubris. Look at the case of Tetsuo Shima from the film Akira, the anti-hero turned powerful menace, who is driven to madness and eventually self-destruction because of his deep sense of alienation, and his inflated sense of self. At times though, we see examples where the benefit of all can be attained. What would have happened had all the great discoveries of the past not been shared? What good is the individual that has realized their inherent freedom and potential, if they do not include others in that realization? We are social creatures by nature, and it would seem that we need to raise each other up, to truly succeed as individuals. Sometimes the path to truth and discovery is a lonely one, but the fruits of that labor should be shared with all. Perhaps our struggle as we move into the future, is merely to hold on to our humanity as we embrace the virtual, and the machine.

“Cyberpunk texts ask questions about what makes us “human” in a heavily corporatized, media-saturated world. How do we differ from higher forms of artificial intelligence? How do we distinguish objects, places, and experiences from their mediated copies? Where do we draw the boundaries between nature and technology?”

With any luck we’ve torn down some walls that we might have realized were not there to begin with, because they exist only in our minds. Through an act of self examination, we come to see that all beings can benefit from our discoveries. A virtual world is rising, and within it lies the potential for great harm and delusion, but with it comes the chance at a new level of connectivity and shared experience for all of us. Existence is still here, and the things we learn in the subtle regions of virtual reality and consciousness are valid. Let’s just hope that the pioneers who cross into those new territories bother to take us along for the ride.

In the follow up to this article Lidia Zuin explores the deeper philosophical implications of what it means to change reality in it’s varied states, if they even exist.