This week in cyberpunk, we see the continued erosion of ethics in the US echelons of power, and we Tim Miller, of Deadpool fame, take on multiple classic cyberpunk properties, among a selection of exciting developments in the cyberpunk media landscape.

The Return of Blackwater 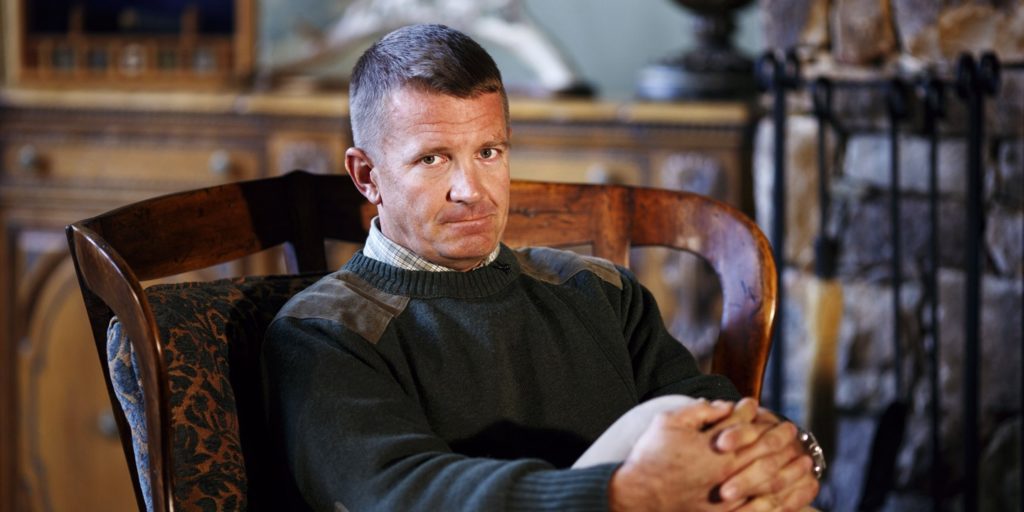 Erik Prince, the head of the notorious mercenary company Blackwater, is urging Donald Trump to privatize the war in Afganistan. He proposes that the solution to the war in Afganistan is not to send more troops, or seek diplomatic solutions, but rather to send thousands of his mercenaries into the country that will be accountable only to a ‘viceroy’. For a company who is most famous for 2007’s Nisoor Square Massacre in Baghdad, it is deeply concerning to think this company would represent the United States’ military abroad. It is also worth noting, that Betsy De Vos, the current Secretary of education, who is best known for her efforts to privatize education in the US, is Eric Prince’s sister.

AI Gets in on the Botany Game 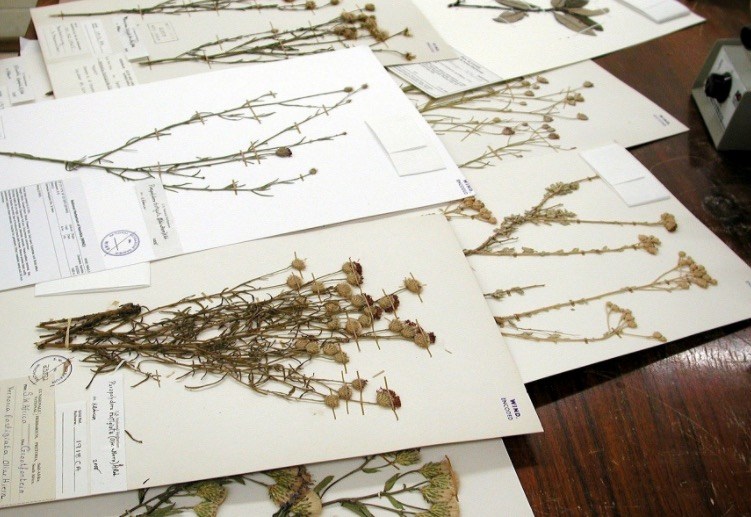 Machine learning algorithms have successfully identified plant species from looking at dried specimens. The algorithms are about 80% accurate, but this is likely to improve over time as the algorithms are further trained and honed. Peter Wilf, a paleobotanist at Penn State, this likely far out performs human taxonomists. This is just another example of machines taking over jobs that were once believed were safe from being taken over by machines. Whether this is good, bad, or inevitable depends on your perspective.

The FCC Continues Crusade Against Internet 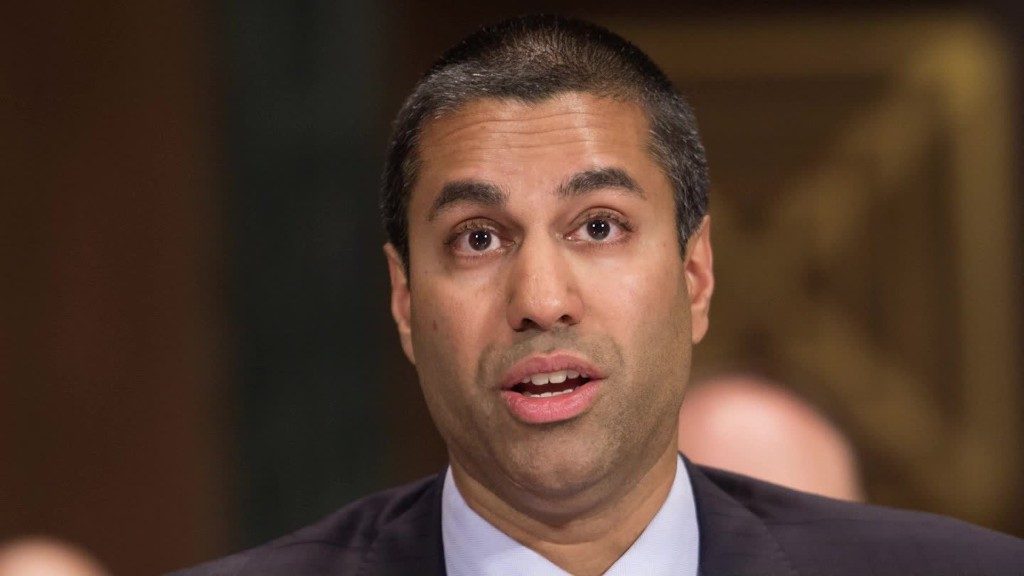 Ajit Pai, whose name you are probably all to familiar with at this point, has again made a declaration of the FCC’s intent under his guidance.Do American’s need fast internet? The FCC’s Notice of Inquiry suggests a change from 25Mbps down and 3Mbps to 10Mbps down and 1Mbps up when technology is at a point that 100Mbps down, 100Mbps down is normal across the US. We should be improving our internet infrastructure, not neutering it. This comes at a time that Ajit Pai has come under additional scrutiny for not recusing himself of decisions that affect companies that he has represented in the past, such as Securus Technologies, which is a prison telephone company. Pai is far from neutral. 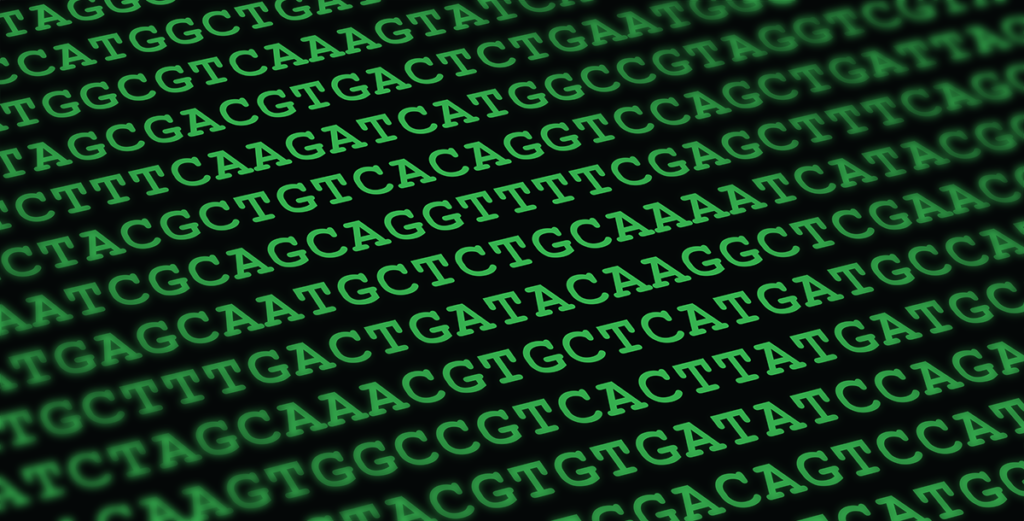 Biohackers, led by the computer science professor Tadayoshi Kohno, working out of the University of Washington, have demonstrated transmitting malware that was implanted in DNA. The malware was encoded into the DNA that would be subsequently read by a gene sequencer. When that gene sequencer converted the genetic code to computer code, it compromised the computer granting attackers control of the machine. This is the latest in a string of demonstrations that show that the physical world and digital world are becoming more intertwined and that computers are increasing vulnerable to non-digital threats. Another example of this is the badBIOS malware, which demonstrated how malware can be transmitted from speakers to microphones.

In a fantastic, unexpected turn, Blade Runner 2049 will be rated R according to the MPAA “for violence, some sexuality, nudity, and language.” This is how we like our cyberpunk. Blade Runner 2049 hits theaters on October 6th.

Terminator 6 is Going to be Thing, Complete with Arnold Schwarzenegger 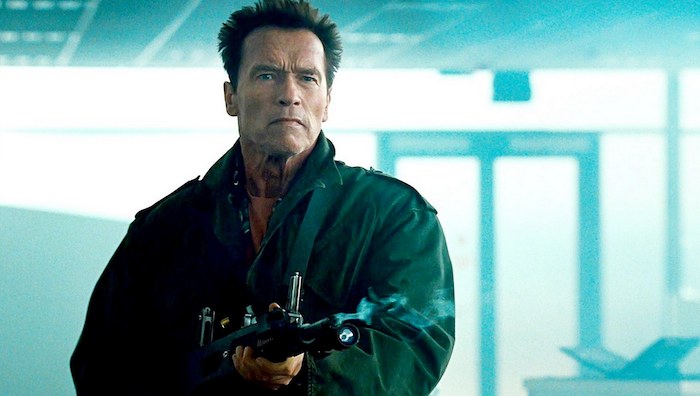 The rights to the Terminator franchise revert to James Cameron in 2019, and that is when, alongside Deadpool director Tim Miller and Arnold Schwarzenegger, we can expect a return to the Terminator universe. Cameron has thrown around the idea that Arnold Schwarzenegger will play a human in this next installment, a human with a relationship to Skynet that spurred the AI to use his DNA as a model for the T-800. If you can’t wait for 2019, Terminator 2 is being re-released in 3D on August 25th.

Neuromancer is Back From Development Hell 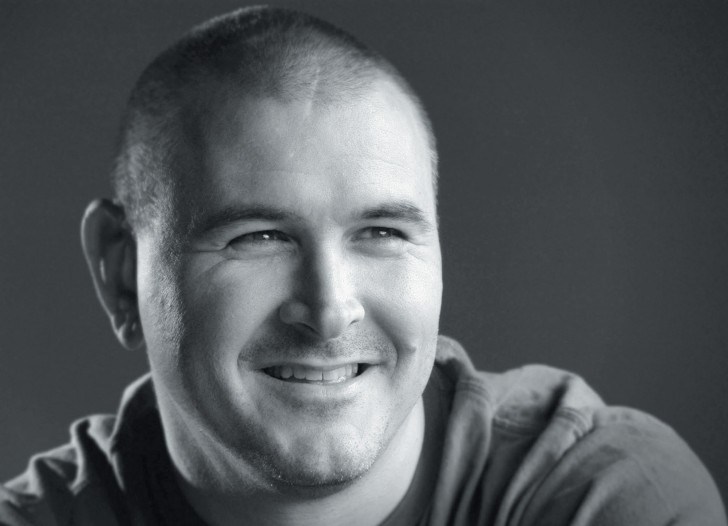 It seems like every time we hear about Neuromancer being developed for film, it inevitably falls back into development hell. This time, Tim Miller, the Deadpool director who is also slated to direct Terminator 6, has been selected for this next run at the classic cyberpunk story. There isn’t much more to say at the moment, but we’ll stay jack in and monitor this situation as it develops.

Could Tron 3 be a Virtual Reality Movie?

During an interview with Jeff Bridges for his upcoming film Only the Brave, he was asked about the future of the Tron series,

“Yeah, yeah, I’ve heard those rumors too. I hope that happens. I think Joe’s got the script and everything, you know. Yeah, I don’t know that I’m supposed to talk about it or not. I don’t know. It should be the first virtual reality movie, you know? Wouldn’t that be cool…to see Tron in that world?”

This in not a solid confirmation, but it does raise hopes that Tron 3 may still happen, maybe even as the first VR movie.

Gustaf Skarsgård has joined the cast of Westworld as a series regular for the second season of the show as Karl Strand, ‘a white-collar guy comfortable in the field.’ Alongside Skarsgård, Fares Fares and Betty Gabriel have joined the cast. Fares will play Antoine Costa, ‘a tech expert with an objective perspective’. Gabriel will play Maling, ‘who is trying to restore order on the ground’. We’ll have to see what these new characters will mean for Westworld going forward. Season 2 of Westworld is set to air in 2018. 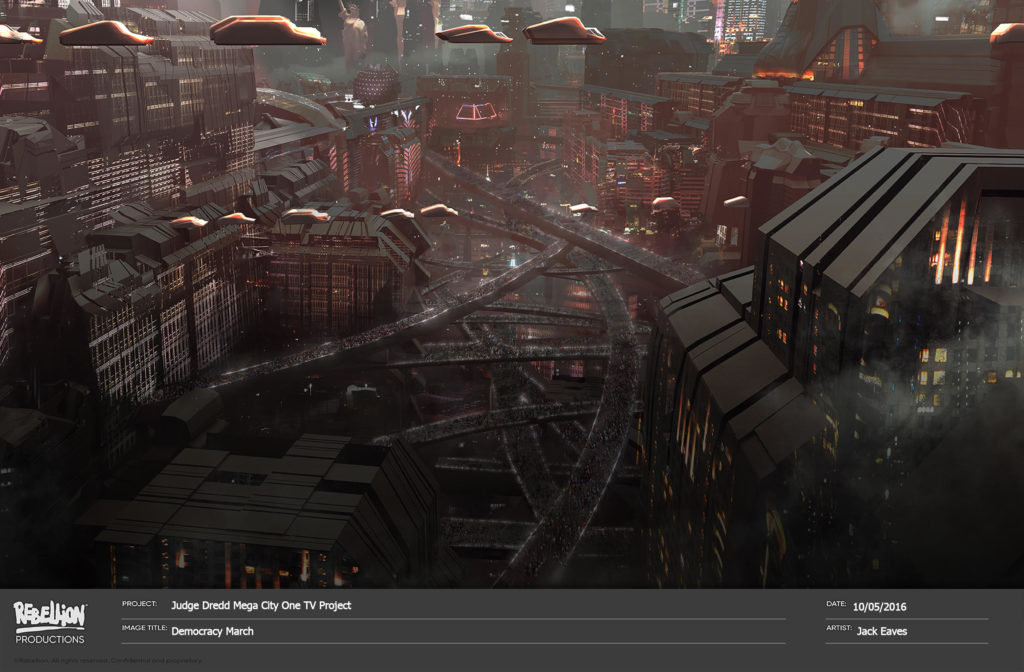 The two pieces of concept art that have just been released for Judge Dredd: Mega City One, are what you would expect from a show named after the city itself. One is a cityscape, and the other is from the street level, showing the slums of the city. These pictures and their labels, ‘Democracy March’ and ‘Lowlife Arrival’, give some possible insight into the story lines that will be drawn from for the series. ‘Democracy March’ may be a reference to the Dredd comic, America. America told a story largely not from Dredd’s perspective and focused on other characters in the world, and this meshes with statements from Jason Kingsley promising “multi-thread storylines, one of which will be Dredd’s but others which take us into the wider world of Mega-City One.” Karl Urban is currently in talks to reprise his role as Judge Dredd. There is currently no tentative release date and the show is currently unattached to a network. 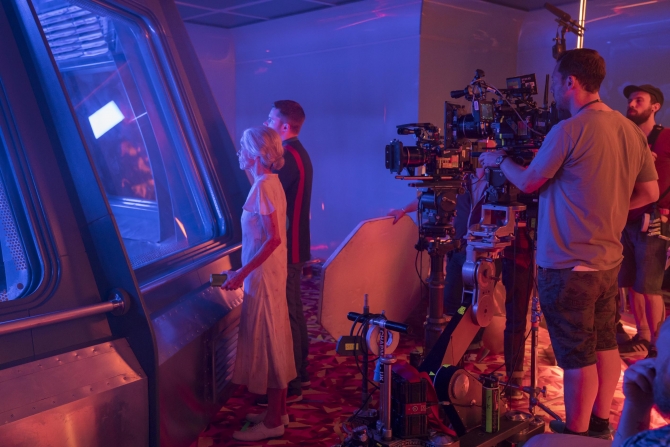 Phillip K Dick’s Electric Dreams is the upcoming show from the UK’s Channel 4, that is an anthology series based on stories by Phillip K. Dick if you couldn’t guess that from the title of the show. The official synopsis for the show is:

Philip K. Dick’s Electric Dreams is a sci-fi anthology series of ten epic, ambitious and moving standalone episodes, each set in a different and unique world – some which lie in the far reaches of the universe and time and others which are much, much closer to home. While the stories may be worlds apart, central to each is the poignant and warm exploration of the importance and significance of humanity.

Each episode is inspired by one of Philip K. Dick’s renowned shorts stories and has been adapted by an exciting list of leading British and American writers and directors. The series also features an all-star roster of cast who head up this thrilling, audacious and emotional journey into the far reaches of imagination.

Phillip K Dick’s Electric Dreams is set to premiere later this year, but there isn’t an official release date yet.

Slice of Life is a Blade Runner inspired short from the minds of Luka Hrgović, Dino Julius, and Anton Svetić. The short aims to tell a unique story while making an homage to the classic film. The official synopsis is:

It is just another damp, rainy, and foggy night on the streets of the futuristic Los Angeles. Beneath the flashy neon signs and heavy traffic, scum of this megalopolis tries to make a living and hopefully survive to see another day.

Criminals, junkies, prostitutes, punks… and one lonesome drug dealer in the middle of it all, fed up with this ever expanding city and lowlife parasites that inhabit it. He may be well on his way to leave it all behind, but fate has made other plans and his whole world will come crumbling down when a dirty cop with an agenda of his own enters his life.

Slice of Life is currently running a Kickstarter to fund their 20-minute film. You can find more information about the Kickstarter here.

All Walls Must Fall – A Tech-Noir Tactics Game

All Walls Must Fall is a tactical adventure game in the same vein as the original Syndicate games, but with a time travel twist. Don’t worry, the cyberpunk, tech-noir feel is still there. The official synopsis for the game is:


Berlin, November 2089: The Cold War never ended. For 150 years both sides have used time manipulation technology to observe and counter each other’s every move. Now this fragile state of affairs is approaching a breaking point, as a rogue nuclear strike will send the world into turmoil. Both sides have scrambled to send agents back in time to find who is behind the attack and how to prevent it. If they fail, the whole world will turn to ash, forever.

All Walls Must Fall is an isometric tactics game where actions happen to the pulsing beat of the music. You control time travelling secret agents as they jump and loop through a single night in the city of Berlin. Using a pausable real-time system, carefully plan your decisions and use powerful time manipulation abilities to your advantage, as you carry out your mission in the shadows or in plain sight. Levels are procedurally recombined, giving All Walls Must Fall a highly replayable campaign structure, while still offering individually crafted components and set-pieces.

All Walls Must Fall is currently available in a early access form, so the game isn’t quite complete. If you’re interested check it out here.

Did we miss anything this week? What are you most excited about? Let us know in the comments below and on social media.

Written by Isaac L. Wheeler (Veritas)
Veritas is a cyberpunk and writer who enjoys all aspects of the cyberpunk genre and subculture. He also journeys deeply into the recesses of the dissonance exploring his nihilistic existence. If you'd like to contact Isaac L. Wheeler (Veritas), the founder and editor-in-chief of Neon Dystopia, you can do so here: ilwheeler.founder@neondystopia.com
Previous ArticleAttack of the Cyber Octopuses, B-Cyberpunk at its BestNext ArticleLast Week in Cyberpunk 8/18/17
You May Also Like