When cyberpunk emerged in the 1980s it didn’t come into existence from a vacuum. Previously authors like Phillip K. Dick, K. W. Jeter, Vernor Vinge, and J. G. Ballard had begun to explore some of the ideas that cyberpunk would take up. These ideas included things like alienation created by technology, identity in a world with more fluid reality, our relationship with technology, and the social implications of technologies effects on culture. Movies that are considered cyberpunk like Blade Runner (1982) and Escape from New York (1981) actually predated the supposed foundation of cyberpunk with William Gibson’s Neuromancer (1984). Gibson said of Escape from New York, “I was intrigued by the exchange in one of the opening scenes where the Warden says to Snake ‘You flew the Gullfire over Leningrad, didn’t you?’ It turns out to be just a throwaway line, but for a moment it worked like the best SF where a casual reference can imply a lot,” showing how this movie influenced his work. Gibson said of Blade Runner,

“I was afraid to watch Blade Runner in the theater because I was afraid the movie would be better than what I myself had been able to imagine. In a way, I was right to be afraid, because even the first few minutes were better.”

“I met Ridley Scott years later, maybe a decade or more after Blade Runner was released. I told him what Neuromancer was made of, and he had basically the same list of ingredients for Blade Runner.”

Cyberpunk evolved out of previous works of not just science fiction, but also the works of Beat Poets like William S. Burroughs and Jack Kerouac, and the Noir movement, from authors like Raymond Chandler and Dashiell Hammett. Post-Cyberpunk too evolved out of what came before it, as part of a continuum.

In cyberpunk the heroes are often outsiders of one type or another. These might be criminals, rebels, or outcasts of another flavor. They take on monolithic mega-corporations or hopelessly corrupt governments. As Mike Pondsmith says,

The motivation that these anti-heroes often follow has more to do with surviving than changing the world. Neal Stephenson’s Snow Crash was one of those late arriving novels that fit perfectly into the cyberpunk genre. The Diamond Age: Or, A Young Lady’s Illustrated Primer was a whole other beast. In Lawrence Person’s essay, Notes Toward a Postcyberpunk Manifesto, he opens with,

Bud, from Neal Stephenson’s The Diamond Age, is a classic cyberpunk protagonist. An aggressive, black-leather clad criminal loner with cybernetic body augmentations (including a neurolinked skull gun), Bud makes his living first as a drug runner’s decoy, then by terrorizing tourists for money.

All of which goes a long way toward explaining why his ass gets wasted on page 37 of a 455 page novel.

Welcome to the postcyberpunk era.

The Diamond Age is a great example of a post-cyberpunk novel. The protagonist is a young girl who is guided by Young Lady’s Illustrated Primer, an artificially intelligent book, to save the world. This world has fragmented into tribes that are not based on any kind of culture based on borders, but rather cultures based on what the individual decides to ascribe to. A fantastic illustration of digital culture in the world today, but also of how post-cyberpunk is different from its cyberpunk origins. 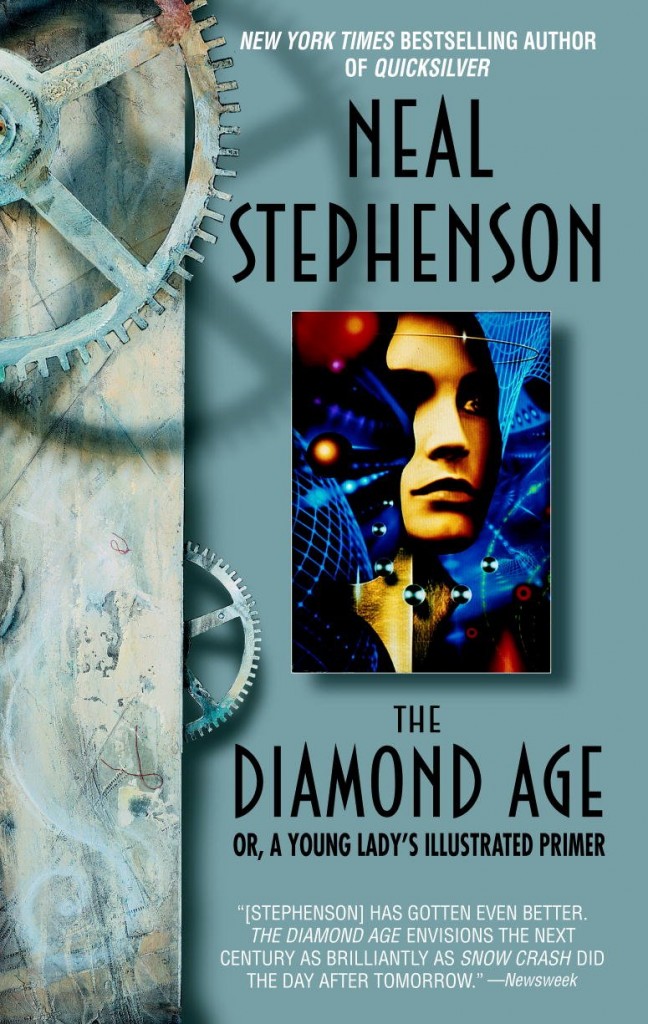 Post-cyberpunk heroes are more often the everyman than they are outsiders. Instead of standing on the outside looking in at this corrupt, technological dystopia that they find themselves in, they are steeped in it. They have a job, a family to care for. Stories are often less about overthrowing or demolishing these corrupt systems but rather changing them for the better from within, rather than from without. Whereas cyberpunk is often cold and nihilistic, post-cyberpunk is often warm and humanist. In James Patrick Kelly and John Kessel’s introduction to Rewired: The Post-Cyberpunk Anthology they make a keen insight into the nature of cyberpunk,

A key insight of cyberpunk, extended still further in post-cyberpunk, is that we are no longer changing technology; rather it has begun to change us. Not just our homes and schools, our governments and workplaces, but our senses, our memories, and our very consciousness.

Most classic cyberpunk stories are about humans and how they interact with technology that is affecting their world. Post-cyberpunk often attempts to explore what happens when we move beyond the threshold of being human, into the post-singularity period that Vernor Vinge and Ray Kurzweil crowed about, or as Kelly and Kessel observe,

One of the obsessions of post-cyberpunk fiction is to explore the edges of this “end” of history, and if possible, to see beyond it.

It isn’t so much that cyberpunk became post-cyberpunk, so what next? as it is, where will the cyberpunk genre go as it continues to mature? Cyberpunk never died as Paul Saffo suggested in a WIRED article in 1993, it has simply begun to change as new generations of authors step onto the stage. These authors didn’t grow up reading Dick, Chandler, and Burroughs, they grew up reading Gibson, Stephenson, and other more modern authors. We aren’t thinking about what the world is going to look like when it is interconnected, remember cyberpunk came into existence just as the internet was coming to be. We are thinking about how technology of our future is going to change society. The cyberpunk future of the 80s is now and the cyberpunk future of the 2000s is beginning to unfold as we speak. Cyberpunk will continue to thrive as the future is pushed outward as long as writers are focused on the focal point of where technology and society interact. This isn’t your fathers space swashbucklers, this is about how humanity will be in the future. There will always be dirt in the corners, there will always be bad people abusing power, and there will always be new tech on the horizon beyond the reach of the loner, outcast, or everyman. As William Gibson said,

For more about post-cyberpunk, read Lawrence Person’s essay, Notes Toward a Postcyberpunk Manifesto and Rewired: The Post-Cyberpunk Anthology.

Written by Isaac L. Wheeler (Veritas)
Veritas is a cyberpunk and writer who enjoys all aspects of the cyberpunk genre and subculture. He also journeys deeply into the recesses of the dissonance exploring his nihilistic existence. If you'd like to contact Isaac L. Wheeler (Veritas), the founder and editor-in-chief of Neon Dystopia, you can do so here: ilwheeler.founder@neondystopia.com
Previous ArticleHave you seen: Cyber City Oedo 808? [8/10]Next ArticleWouter Visser’s M A I N F R A M E D, Cyberpunk from the Netherlands
You May Also Like

Evolving into Sentience: Frankenstein, Ghost in the Shell, and The Man of the Crowd
May 9, 2017
7 Comments