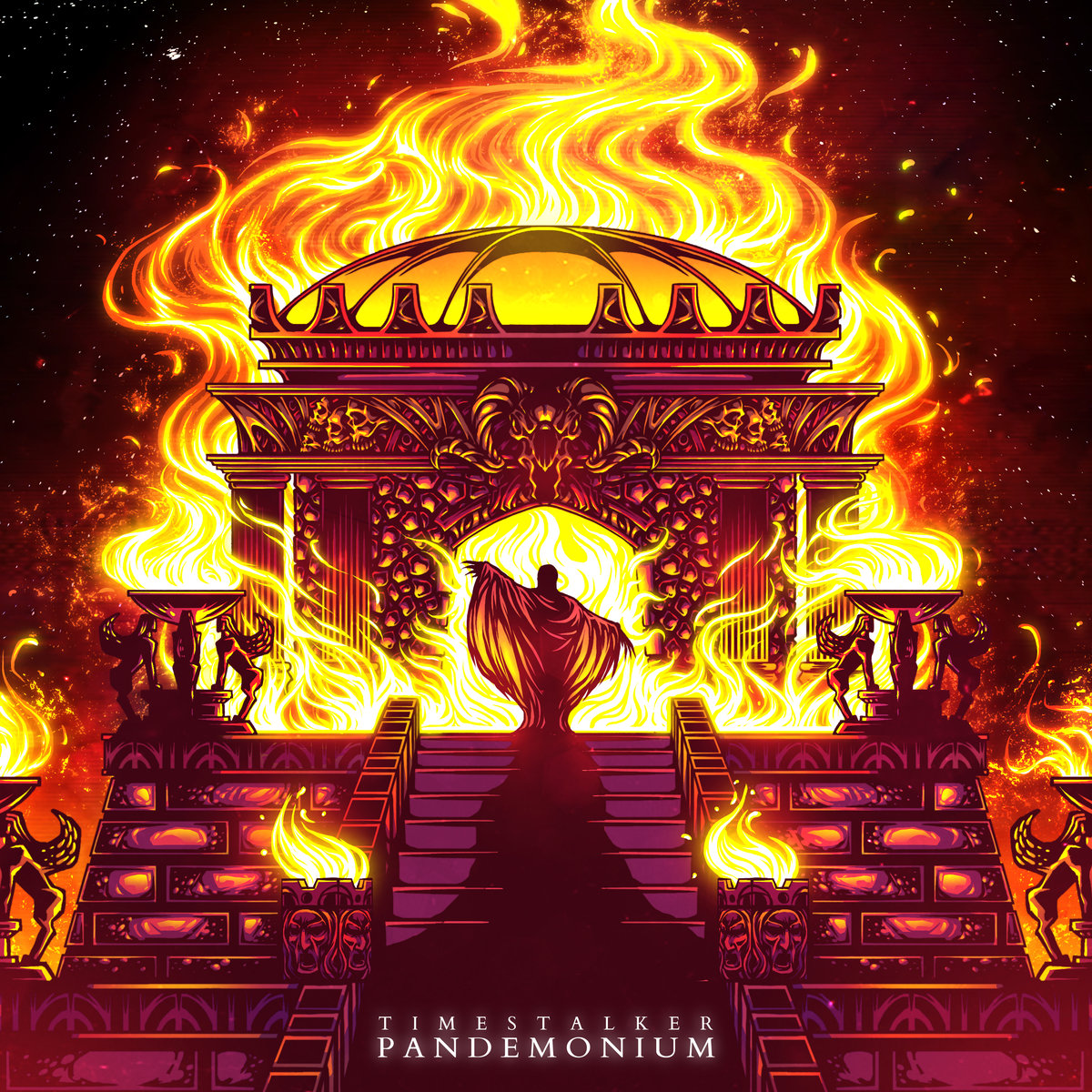 It’s not like you haven’t done this before, but there’s an illicit thrill about getting access to music when you’re not supposed to that just doesn’t dim with age. Your contact forwarded you a valid crypto key for one-time use. It was fate, really, you reflect as you punch in commands:
git clone ssh:guest@>neondystopia.com/dossier/march
git checkout dossier-supplement
more ./cyberpunk-music-dossier-supplement

If there’s something I comment on with metronomic precision it’s that there are times when less is more and it can take a dispassionate eye to recognise it. Pandemonium is one of those times when the metronome swings in the opposite direction and hits the sweet spot where, as if passed through an alembic, all that remains is a distillate of what makes the album great.

Take The Beyond as an example. I’ve belabored my non-cyberpunk metaphors but as an introduction, it delivers with the slow fade in of a synthesizer dyad echoing the footsteps of evil before a blaring horn announces that pandemonium is the order of the day. The song is divided into thirds; introduction with its dyad and bellowing synth horn, escalation with the addition of new voices and the return of the creeping two-note walk from the start of the song, conclusion with its increasing tempo and higher pitch of instrumentation.

The artwork for Pandemonium is good enough to warrant a mention. It’s never something that would make or break an album but it’s undeniably attractive with its restrained palette and rule-of-thirds composition. Unholy Dominion sounds like a lost track by GoST at first before breaking out into slasher movie territory with a similarly severe ending as The Beyond. From what I’ve read (and I’m sure that if I asked him he’d verify it) Timestalker produces music on a tablet but there’s something about Pandemonium as a whole that makes me think there’s something else at play. Ahh yes, there in the credits. Volkor X.

It might be more my own bias than anything else but I like the polish that Volkor X puts on things. If you were to look back to my comments on Hollywood Burns and Volkor X’s own release then you’d see the precedent; the production values are commercially good. Again, as with the comments I made about artwork, that’s not enough to make a bad release into a good one but it is enough to make me pay attention. Pandemonium as a track is constructed in the same manner as The Beyond feeling like three separate songs blended into one with a great Dimi Kaye guitar solo to pull you through the final ninety seconds of the album.

I don’t know if you’ll like Pandemonium. There’s been a lot of darkwave coming out of synthwave as both winter and Perturbator cast their ripples through the synthwave scene, and you might have had your fill by now. That being said if I don’t hear another darkwave release for six months or so I’ll have ended my run on a high with Timestalker’s Pandemonium.

You can listen to the full album and pick up a copy over on Bandcamp.

Written by Bill Ryker
Bill Ryker is sat in a cubicle farm, bathed by artificial lighting. His corporate enslavement involves waiting for his role to be either outsourced or automated. In order to keep him docile, Bill is permitted the use of headphones while at work. His corporate masters have not realised their mistake.
Previous ArticleLast Week in Cyberpunk 4/28/2017Next ArticleSimulated Living: The Matrix, Existential Nihilism, and the Shortcomings of Technology
You May Also Like

Karate King Presents: The Annihilator
May 19, 2015