SPOILER ALERT: There is some information in this post that could be classed as a spoiler.

When I watched the announce trailer for Almost Human I sat awed by the prospect of a truly cyberpunk live-action show. The first episode aired and I sat down to watch it. I was immediately struck by the huge amount of references to successful cyberpunk movies. Ones that I noted were Bladerunner-esque streets, umbrellas, and music, augmented reality displays in the style of Minority Report, I, Robot body replacement and hatred of robots, and memory recall of Total Recall. The first episode, although very cliché, set the stage for an interesting show. Unfortunately, that show never materialized.

The first major tripping point of the show is its structure. It is a buddy cop, police procedural with science fiction elements. This manifests as silly banter between our two main characters (Kennex and Dorian), very episodic stories, and almost incidental use of science fiction tropes to explain things that could be explained without those tropes.

The banter between Dorion and Kennex works to make them more likable characters, but could have been better integrated into the ongoing story of the episode. Instead we get long unnecessary exchanges, where Dorion scans Kennex’s penis for instance. Really? Sadly, this represents the humor of the show. It comes off as adolescent, whereas a cyberpunk show would have gotten a lot more from deadpan, black, nihilistic, or clever humor.

These long scenes take away from the already valuable real estate of the 45-minute story. Having so little time to tell a technologically complex story means the technology often comes off as flat or rushed. Another problem with the overly episodic nature of the show is that the season arc (which we never get to see the end of) only receives brief snippets of screen time. I liked where it was going, but we’ll never know. 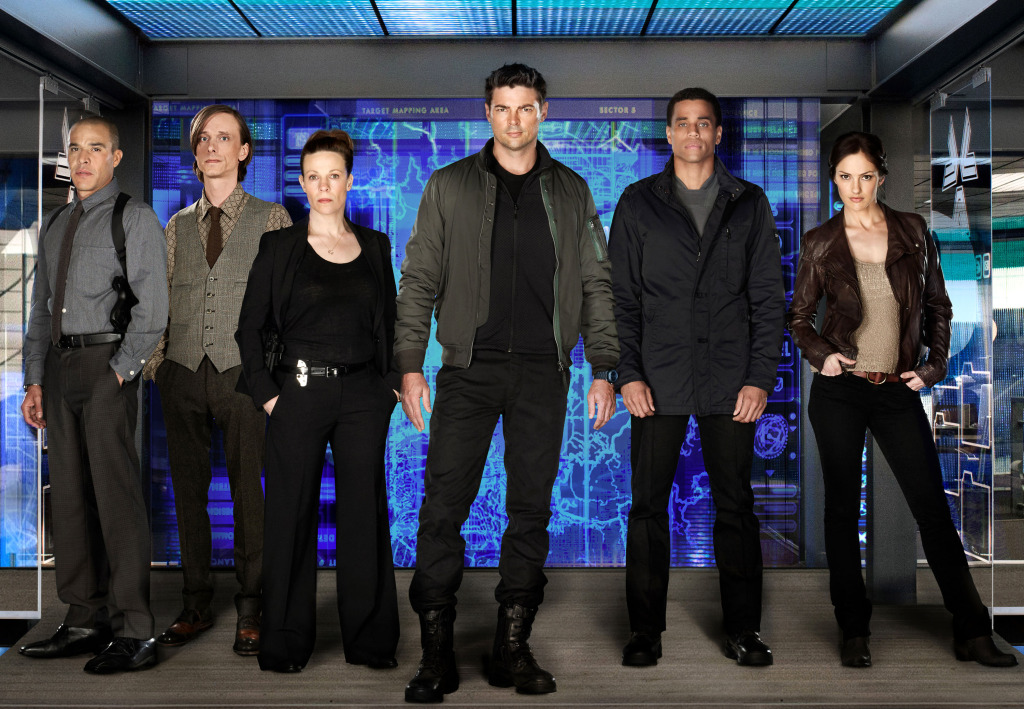 What’s worse is that even with all this time spent on banter, there is little meaningful character development over the 13 episodes that made it to our screens. Characters are more defined by their archetype rather than by their own personalities. Karl Urban’s character John Kennex is based on the hard boiled cop trope, but comes off more as an adolescent trying to play that role. He never grows out of it. Dorian is the android with feelings, and is probably the most interesting character. There is a moment where we learn that there might be some interesting skeletons in Dorian’s past, but we never see them again. Detective Stahl is a genetically engineered human, called a Chrome, who does little else than play info dump, talk to Chromes (because normal people don’t get them, Gattaca anyone?), and play Kennex’s love interest. Rudy Lom is the nerdy, awkward technician. Rudy’s awkwardness almost always comes off as a bad sex joke. Detective Paul is simply the butt of jokes for Kennex in his jockey adolescent way (notice a pattern yet?), and Captain Maldonado is typical strong female type, who is secretly insecure. The show is filled with sexist stereotypes, as you can see.

Most of the bad guys in the show were also straw men to be knocked down in the course of the episode. With the single exception of Dr. Nigel Vaughn, Dorian’s creator. Most of them are glorified thugs, drug dealers, and murderers who are wearing clothes too nice for their station. With two noted exceptions this also applies to all of the other characters in the world. Cyberpunk is often defined as “High Tech, Low Life.” There is almost none of that real low life in this show. The exceptions to this are some background characters that we see in some transition scenes, and episode 11’s hackers who actually look great from a Cyberpunk aesthetic perspective. 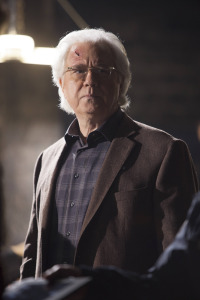 Now after that pretty scathing rant, I am honor bound to point out that the show did have some good qualities. Episode nine and eleven are excellent and even if you don’t watch anymore of the show, watch those. Dr. Nigel Vaughn, who I mentioned above, is a great villain. He is a scientist that has been stained by the fact that one of his androids killed a ton of people. But what is great is that Vaughn uses the police to get everything he needs to restart his research and then gets away (supposedly to return in a later episode that never materialized). He accomplishes this by brilliantly reactivating the android that committed the original attacks and uses her to steal one of the components that he needs, while he in turn he uses the police to get back some of his confiscated equipment by saying he can use it to track the rogue android, but then makes off with what he needs when the police are distracted by his rampaging android.

Episode eleven is about hackers and does an admirable job of describing hacker ethos, and uses the hacker group Disrupt to make a good commentary on Anonymous. We get to see a hacker club with great cyberpunk visuals, and the character Nico really should have become a series regular as he was the hacker that they needed, but do not deserve. 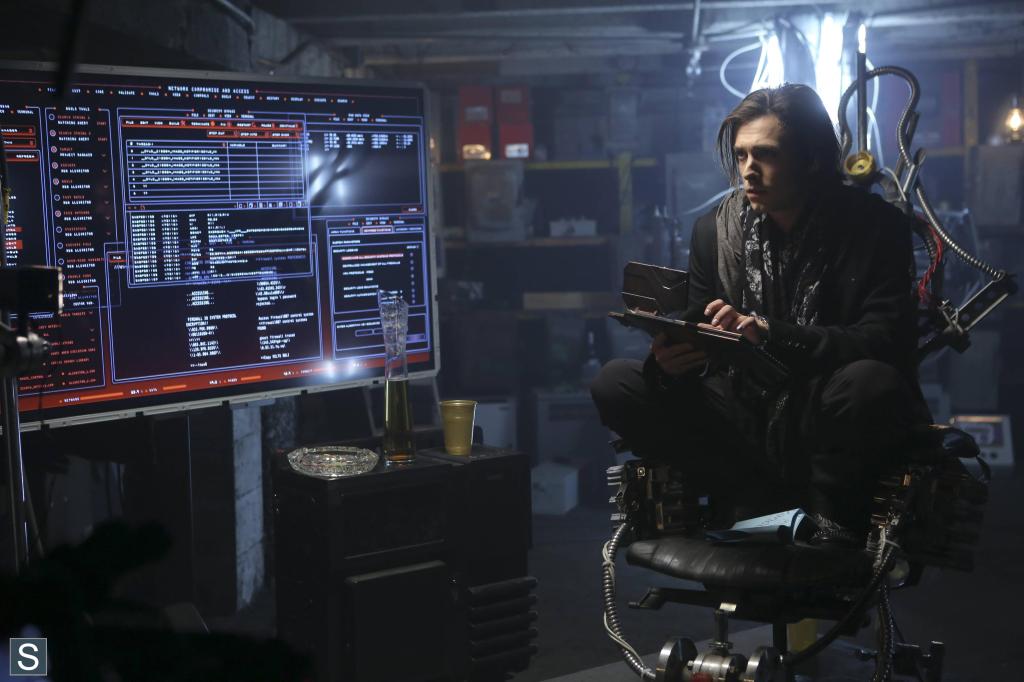 Now the most interesting part of the show in my opinion is the part that gets the least explanation. The Wall. What the fuck is this thing?! We know that it separates the city from unwanted elements. Due to the theft of tropes from cyberpunk movies, I assume that The Wall is like New York in Escape From New York, where it has been walled off into a massive prison. I really wanted to see beyond the wall, because I feel like that is where all of the Low Life is hiding, perhaps even why we don’t see much of it in the city. Or maybe the city is really the last bastion of society, and everything on the other side of the Wall is an apocalyptic wasteland. I guess we’ll never know since the show was canceled, but this question remains burning.

So my theory of the shows overarching plot is that The Syndicate is planning on bringing down the Wall, and that if Dr. Vaughn wasn’t working with them in episode nine, which he could have been, then he will be when the Wall comes down.  This would bring chaos to the city with Vaughn’s army of new androids at the forefront. Now that would have been a damn good season finale! If we could have seen something like that before this show was so rightly canceled it may not have been. A lot of shows take more than a season to really get good anyway. Star Trek TNG, for example, really hits its stride in season three.

Almost Human had a lot of potential that was lost in some poor choices involving characterization, structure, and use of clichés. That being said there was another series called Total Recall 2070, that ran in 1999 (a great year for cyberpunk), that shares many of the same themes and concepts as this show but really explored them well, despite being on a much smaller budget. If you liked Almost Human, then I highly recommend Total Recall 2070.

Written by Isaac L. Wheeler (Veritas)
Veritas is a cyberpunk and writer who enjoys all aspects of the cyberpunk genre and subculture. He also journeys deeply into the recesses of the dissonance exploring his nihilistic existence. If you'd like to contact Isaac L. Wheeler (Veritas), the founder and editor-in-chief of Neon Dystopia, you can do so here: ilwheeler.founder@neondystopia.com
Previous ArticleExclusive: Brigador’s New LookNext ArticleCity@Night 004 – Evan Joseph
You May Also Like