Things haven’t been easy for Richard Kelly. It can be argued today that Donnie Darko is one of the best, and perhaps the first, cult classic of the 21st century. That came after being dismissed at Sundance for being too confusing a film and less accessible to audiences than Memento and Hedwig and the Angry Inch.

These critical missteps followed Donnie Darko into theaters, where more reviews cited the movie as upsetting and offensive, thanks in no small part to a plane exploding on screen about a month after 9/11. Kelly’s status as wunderkind wouldn’t come about until DVDs allowed for more opinions, which helped it succeed in UK theaters. A decade and a half later Donnie Darko’s Jake Gyllenhaal is a massive star and the film has been updated, restored, and re-released in theaters all over the world several times, most recently in 4k. Southland Tales, Kelly’s second film, wasn’t as lucky.

By 2006 Kelly was regarded as a visionary director. His success with Donnie Darko afforded him some license to experiment and with that freedom Kelly released one of the most ambitious and complicated films ever made. Where Donnie Darko told a tale of personal madness held hostage by the power of time and reality, Southland Tales warped those cosmic forces around a nation on the brink of apocalypse.

Kelly’s second outing as a filmmaker, this time at Cannes, seemed to start off with a similar reception. At the official viewing, the film was booed by critics, prompting a hurried re-edit of the film to work around the confusion before hitting US theaters where it died before fading into obscurity.

It would be dishonest to say critics were unfair to Southland Tales. The Cannes cut, which, outside of the festival was only shown in the UK and select European countries, was 160 minutes of confusion atop layers of symbolism that seemingly never connects. This is explained by the film’s structure. Southland Tales opens with “Chapter IV: Temptation Waits” and closes with “Chapter VI: Wave of Mutilation.” Many had no idea where the first three chapters had gone.

During pre-production, Kelly teamed up with fellow writer-director Kevin Smith, who plays General Simon Theory, and got the idea to convert parts of the script into three graphic novels. This would allow Kelly to make the film he envisioned without having to change how Southland Tales was intended to work. But 350 pages worth of comic book isn’t something critics could’ve been expected to read at Cannes, and a small printing paid for by Smith’s View Askew production company meant regular moviegoers never even knew it existed or that the books were more than just licensed tie-in merchandise. With half the story missing, the film remained incomprehensible to most.

Initially, I intended to summarize the eight major plot points in the graphic novels and follow them through to the end of the film, explore how important a handshake is, how scientists know the future will be far more futuristic than they predicted, and why pimps don’t commit suicide. What Kelly puts together in Southland Tales is that engrossing, but in order to make sense of what happens to the future first family aboard the Jenny Von Westphalen MegaZeppelin, we need to discover the road paved by nuclear explosions in El Paso and Abeline, Texas. Kelly’s meandering story and intentional use of symbolism would make it too laborious to read and would render the story impotent. A basic understanding of the future, 2008, is still necessary to understand even the simplest of references that will follow.

After twin terrorist attacks in Texas, the Republican party grabs the overwhelming majority of Congressional seats in the 2006 midterm elections by stoking public fear and claiming that America is living though the end times. This increase in representation allowed Congress to bolster the Patriot Act and give President George W. Bush more power. The draft is reintroduced to supply soldiers for the expanded War on Terror in North Korea, Syria, and Iran, and to police state borders to weed out terrorists. Local police departments like the LAPD have been dissolved and are absorbed by Urban Protection Units that answer to the NSA. Republicans like Senator Robert Frost (R-Tx) and his family tour the country to preach about the second coming of Jesus being connected to all this war. These distractions allowed the NSA time to prepare and roll out USIDENT, the internet under government control. It requires users to submit their thumbprint at all internet connected devices to make sure they are monitored and their data retained.

Dismayed at their continued election losses, the Democratic party fractures into many small groups. Most are powerless and eventually disappear except for the neo-Marxist movement. Through immense support from a grassroots effort, neo-Marxists have recruited hackers and infiltrated USIDENT, leading to the creation of USIDEATH, a way to get online without the government knowing (think of it as TOR networking moving through NSA servers). Fearing that the country will slip into a rightist theocracy, neo-Marxists vow to “destroy capitalism and dethrone God” by arming for civil war, exposing systematic killings by police, cover-ups by USIDENT, and bringing people to their side through the Digits for Democracy campaign.

The second American civil war is taking shape during the greatest energy crisis the world has known. Temperatures continue to rise and the US military is running on empty. That’s when a German corporation, Treer, announces the discovery of fluid karma, a substance deep underground that wraps around the earth’s core like a “snake guarding its egg.” Headed by the Wizard Baron Von Westphalen, Treer utilizes the force of tidal currents to extract fluid karma through its Utopia tidal generators, radiating a zone of quantum energy from the Southland to the Arizona border, rendering the use of oil as fuel and electricity obsolete.

These factions all converge on Los Angeles on July 4, 2008 to decide the fate of the country, and by extension the world. 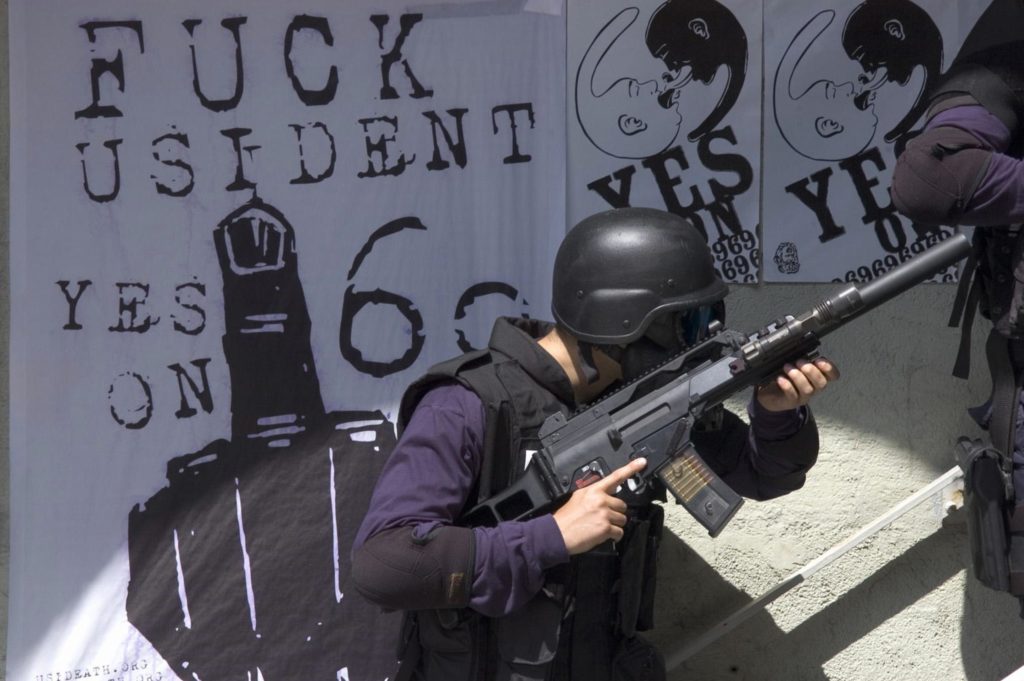 Essentially, Southland Tales layers apocalyptic portents from of the Book of Revelation onto Philip K. Dick’s Flow my Tears, the Policeman Said, where experimental drugs found in fractured, future America sends a celebrity into an alternate dimension, and makes it all relevant to the George W. Bush administration, the War on Terror, and the public’s tolerance for both. While USIDENT seems to point to a post-Snowden understanding of government surveillance, it points to Bush’s use of warrantless wiretapping and how it could (and did) expand into a national spying apparatus. Same goes for wars in Syria, peak oil, and the concentration of power in the hands of Republicans and their families.

Those things are still relevant today but Kelly didn’t set out to be prophetic. Southland Tales is more concerned with being descriptive and prescriptive though that may not have always been clear.

Casting made little sense back in 2006 and that still feels true. A gaggle of sketch comics from SNL, MadTV, the Upright Citizens Brigade, and a couple of rehabilitated pop stars, orbit around Sarah Michelle Gellar sticking close to the comedic tone of Buffy the Vampire Slayer, an uncharacteristically serious Sean William Scott, and a surprising performance from Dwayne Johnson. With 11 years of revisiting Southland Tales one of the more prominent elements that stands out with each viewing is how effortlessly Johnson transitions from the calm of fluid karma to the manic panic triggered by ruptures in time and space as Boxer Santaros. It’s an acceptance of the insanity that follows him everywhere.

I am a pragmatic prevaricator, with a propensity for oratorical seniority, which is too pleonastical to be expeditiously assimilated by any of your unequivocal veracities.

That escalation of madness has its grip on the entire world, but nowhere is more affected that the Southland. As Utopia extracts fluid karma, providing the area with power, it slows the earth’s rotation, affecting the minds of the entire planet but especially those nearby.

Fluid karma has also made its way to the Santa Monica Pier, inside an autoinjector. From there, General Simon Theory has set up a drug ring that moves outside military channels. Soldiers tasked with guarding Utopia from motorized parapets by day distribute fluid karma to the masses at night. Like KR-3 in Flow my Tears, the Policeman Said, fluid karma is a hallucinogenic drug that changes the user’s place in reality, and as they inject more they drag others with them.

This is the case for Boxer Santaros and the twins Roland and Ronald Taverner. Past their existing tolerance they’re able to step outside of time and see into the world they left behind and the one they’re approaching, but remain in constant confusion about who they are and where they physically stand.

Fluid karma’s temporal irregularities also distort the real and the false, making both equally legitimate. The symbolic importance of this quality extends far throughout the film, touching each faction in some way, but it’s perhaps most accessible though a long music sequence, something Kelly is known for doing in his films, where the past and present inserts itself between layers of war propaganda in a trip gone bad.

As this circumstance appears for other characters it’s clear they’re being asked what role they’ll choose to play in the present if they can see where America is headed? If they could remember where they were before madness was common? Can any of us?

In defining its status as a cult classic, Southland Tales runs into a few problems. It wasn’t what critics wanted from Kelly after coming to appreciate Donnie Darko and it wasn’t delivered in a way the audiences could readily digest like they did with his first film. Kelly managed to say a lot in a short amount of time and was punished for it by having his film all but forgotten.

But time’s change. The uptick in political insanity has brought a new wave of fans that are thinking about the absurdity of American society, the intersection of doomsday religiosity and violent partisanship, giving Southland Tales a chance at the cult status it was denied. Even Richard Kelly sees cause for a restoration of the film given the renewed interest.

That doesn’t mean you should wait to see Southland Tales. Every day it seems there’s more reason to have reservations about those who hold power legitimately, those that want to wrestle it away, and the villains that promise to save us from both. If any of that gives you pause you owe it to yourself to see this film and ask yourself what might you do differently tomorrow because America isn’t guaranteed another birthday.

You can get a copy of Southland Tales here, which includes the graphic novels as special features, or you get get a paper copy of the Southland Tales: The Prequel Saga here.

The Future is Now: An Interview with Josan Gonzalez
March 15, 2016
2 Comments