In “Tomorrow,” we see Cole surviving the early days of the plague in Ukraine before he’s spotted by the UN and handed over to the military that’s been hunting him. Soon he’s reunited with Railly who’s been infected and is slowly dying.

In 2043, Ramse continues to try his hand as the world’s last conscience and attempts to broker peace between Colonel Foster and Jones. He thinks that by doing this he can somehow protect his recently-reunited family and still get Cole back to the future. This warning goes unheeded and he’s imprisoned, allowing the two military factions slaughter one another, leaving Jones’ side to survive.

Meanwhile, a new timeline opens up, one in which Cole and Rasme’s story of how they came to be contacted by Jones changes completely. No longer are they prisoners approached with a proposition, but scavengers stopped by the military and questioned. Coincidental as it may be, it turns out that one of these men turns out to be Cole, named similarly to the man in Dr. Railly’s recorded message. Jones then makes her pitch, that time travel can help erase reality as it is and fix the future. This version of Cole is quick to deny her. 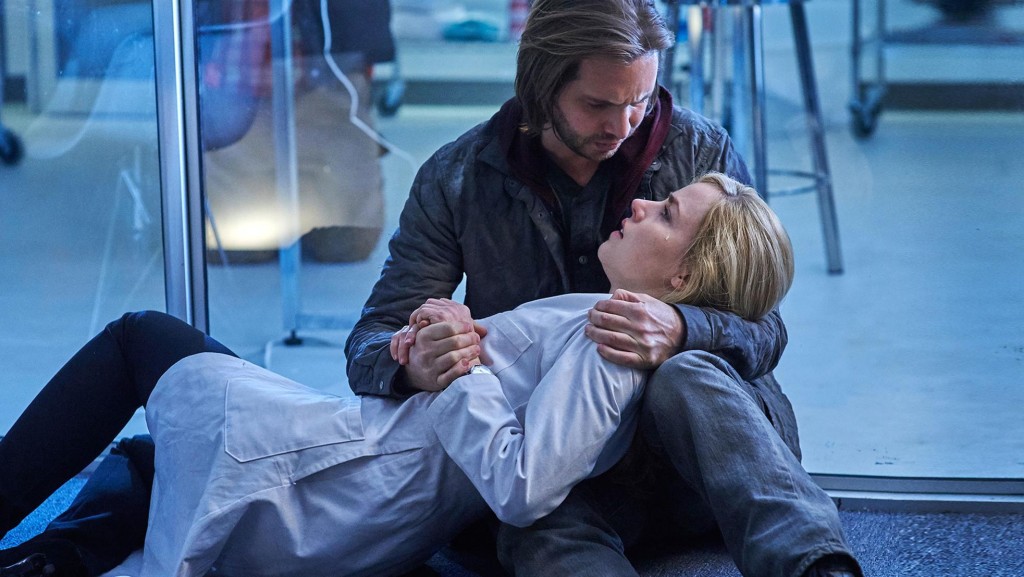 With Foster’s core in place, they’re able to pull Cole back from 2017, just as Railly dies. As he’s catching his breath, Ramse explains everything that has occured in his absence: his imprisonment, the slaughter of Foster’s men, and the revelation that they’ve developed a cure, one that’s lost to them now because of Jones. Cole is unsympathetic to Ramse’s developing conscience, and suggests that all he does now is to keep Railly alive.

With this episode we get a smidgen of exposition and not much else. But before we go any further, let’s talk a little bit about the complexity of time travel and how it relates to 12 Monkeys.

The two most prevaling thoughts on the structure of time as it relates to the highly complicated and convoluted premise of time travel is a linear and circular path. With linear time travel, any even changed in the past can drastically alter the future. This is Chaos Theory rippling thoughout the ages. In a universe with circular time, past events merely create a splinter in the flow of time, sprouting new realities that run parallel to the original. 12 Monkeys can’t decide which it likes.

Already we’ve seen a change in the flow of the original timeline. Cole has visited a 2043 where Ramse led West 7 and Jonee was a crazed prisoner, then was able to erase this time period through his actions. Now we see a new timeline sprouting parallel to the main one shown in the show. With conflicting sciences, even fictional, the show has set itself up for gaping holes in the future, ones big enough for any sense it had made to fall right through.

The rest of this episode was either exposition in the form of Jones weeping over a dead child, something that was truly unneeded in terms of motivation, as we know about a lost husband and a yearning for the taste of a real life, or set dressing, which was actually the best they had to offer. Goines joining protest groups outside of Railly’s office was a nice touch, and the show could use more of her crazed ramblings. I’m actually inclined to say the show would work better had the Cole/Goines relationship been closer to that of the movie, having them meet and interact more frequently. Also some shots of the slaughter inside Foster’s bunker were expertly captured.

But even this bit of praise feels like too much. Nine episodes in and we know nothing about the 12 Monkeys, the witness, the woman, or the plague doctor. The origins of the virus are slightly less mysterious than they were in the pilot, but it seems to be a moot point as new realities spring up to counter any effect Cole has had in the past. Without goals and meaningful action, the overall plot loses its urgency and leaves it with nowhere to go. And with 12 Monkeys loving to continue running in place like a kid with ADHD disrupting the rest of the class, it either needs a dose of Prozac to focus or prepare for its eventual cancellation.

Written by Daniel Rodriguez
Daniel Rodriguez is a freelance writer and author from New York City.
Previous ArticleSteam Cyberpunk Sale Now On!Next Article‘Chappie’ Review: Putting the Punk Back in Cyberpunk!
You May Also Like