After training Railly in the basics of using a handgun, fearing the men who’d kidnapped Jennifer could come after her, she’s called by police who want to know what happened at JD Peoples. As Railly gives her testimony, she learns of the surviving doctor from Goines’ secret lab. Railly recognizes him as a relief-effort doctor she’d worked with in Haiti. She tells Cole this who plans to meet with him in the past. Railly, terrified for his safety in that dangerous country, tells him to keep his distance from her when he arrives in the past.

In Haiti, 2014, Railly, working in a relief camp during a viral outbreak following a massive earthquake, confronts a gunman seeking refuge for a young girl. Railly fears that the gunman she let getaway could be spreading the virus throughout the neighboring city. In her hotel room she meets up with Dr. Henri Toussaint, the doctor who’d escaped the Goines attack and they share a drink. She reveals that every epidemic frightens her, but she doesn’t reveal her knowledge of Cole or the future. After they share a kiss, they fall back into bed as Cole is pushed into Haiti from the future.

In 2043, Ramse and Whitley, a soldier, hunt the nearby forest for scavengers. They butt heads over Cole and Ramse’s stay at the compound before they’re attacked. Whitley hesitates when he sees it’s a woman, but Ramse knocks him out and corners her. Back in Haiti, Railly and Henri return to a camp bereft of supplies—someone robbed them overnight. Cole spots the doctor and attempts to confront him, but there’s a complication that sends him back to the future, then to the past again. It gives him a nosebleed and he uses it as a sign of his disease progressing to get close to Henri. Cole almost convinces the doctor to follow, but when Railly approaches, he bolts from the tent city. Railly, convinces her superiors to mandate a quarantine of the sick. 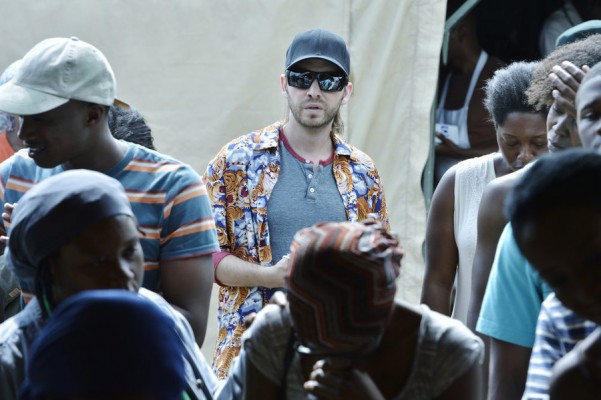 Henri leaves on his own in search of replacement meds and is stalked by Cole. Henri turns down an alley where Cole is intrigued by a shrine with voodoo affectations before attacking. Quickly Cole overpowers him, takes his gun, and questions Henri about Jennifer and the attack in hopes of stopping the outbreak. He agrees to walk him back to the tent city to deliver medicine before they continue walking. Ramse questions the woman—Max—about Deacon and several other people they were affiliated with and what she’s doing here. She refuses to return to their old group and asks to stay with him. Ramse points her in the direction of a civil town not far from them.

Henri reveals little about the virology tests he’d performed with Jennifer as they collect medication, but soon men with guns burst in, led by the same man who will kidnap Jennifer from the hospital in 2015. Cole attempts to fight him, but he exhibits strength he cannot match. And as he chases after Henri, Cole dispatches the gang to rescue the doctor. Meanwhile, Railly, who’s struggling to save dying patients, finds that she has an open would and panics at the thought of being infected while also viewing all of her patients dying. A police officer had been shot and the quarantine might have been broken. She believes that it is the beginning of Cole’s viral-outbreak story.

The man has chased Henri back to the altar, and Cole cuts his face with a broken bottle, giving the origin of a trademark scar he’ll have in the future. Henri tells Cole the “Night Room” was replaced with a mobile lab outfitted with ultraviolet rods capable of destroying any virus. And though he is afraid and hunted, the doctor returns to the tent city. Railly is informed the virus if river fever, a common virus, and is forced to take time off work to calm her mind from the hysteria she’d exhibited. Cole watches from the shadows as she breaks down before phasing back to the future.

In 2015, Railly’s gun training has progressed to using live ammunition on trees. She wants to know about Haiti and he tells her that he’d stayed away as she asked, but she knew he’d appeared. She agrees to accept a job offer at the CDC to help him locate the lab. She wants to know what happened to Henri. Cole says they were separated, when in truth he’d gunned him down in an alleyway. In the future, Ramse informs Cole of Max’s arrival and her story, then suggests they prepare for trouble with Deacon.

This was the episode I was more or less afraid of watching, but knew would come eventually. To take an established universe that existed in a ninety-minute film and stretch it to fill thirteen forty-minute episodes there will undoubtedly be items of disinterest present to pad out time. I was just hoping it would take longer.

While we’ve seen some complications of time travel are being teased, the relationship between Cole and Railly is given its first slivers of mistrust, and the search for Dr. Henri Toussaint are all logical steps for the plot to take, the rest of the episode limps along under the weight of unnecessary filler. The man in black hat, who is the reoccurring spook tied to the 12 Monkeys, is included here in a way that is both logical and unnecessary. With the combination of a high-crime country like Haiti and a viral outbreak as the country is coming back from the devastation of an earthquake, there is an abundance of threats writers could’ve drawn from without the need of their mysterious villain. And with Cole on his heels, and all the indicators present that he’d continue to kill doctors linked to Goines, the villain’s inclusion was overkill and actually drew focus that could’ve been better diverted towards virology and the future that awaits both Railly and Cole.

And while we’re on the future, I cannot leave this review without touching on Ramse’s subplot. Now I’m a fan of Kirk Acevedo, especially when he’s using his smoker-rasped voice to intimidate people, but the story of an ex-girlfriend in a post-apocalyptic wasteland hoping to pull on heartstrings in order to exploit his resources for her and her band is an old one. With shows like The Walking Dead and the general obsession with post-apocalyptic fiction in general, this is a scenario that’ll just conjure thoughts of woks that have done it better. In short, Ramse’s subplot was a chance to flesh out a destroyed future by a virus created in the present and they chose to waste it by introducing a new villain in a story that had no need for one. We’ll have to wait to see how it turns out, but it feels like we’re witnessing the setup to a dip in story quality.

Written by Daniel Rodriguez
Daniel Rodriguez is a freelance writer and author from New York City.
Previous ArticleUPGRADED: The Cyborg AnthologyNext ArticlePsychedelic Cyberpunk Art: Cognitive Dissidents
You May Also Like