When one mentions The Phantom franchise people don’t usually think cyberpunk, myself included. The Phantom, created by Lee Falk in 1936, was the first hero to wear a skin tight costume. The Phantom had its first taste of cyberpunk almost 60 years after its inception as a Saturday morning cartoon: Phantom 2040. The unique visual style of the character designs, which is immediately recognizable by cyberpunk fans of Aeon Flux and the Animatrix, were created by Peter Chung. The show also sports amazing voice talent including Mark Hamill and Ron Perlman.

The premise of this entry into the Phantom lore, is that Kit Walker’s (the name shared by the original character as well) father dies under mysterious circumstances and Kit is called on take on the mantle of the Phantom and protect the world and the city of Metropia. In doing so he is joined by a series of allies which includes a hacker, a shady information broker, and later a villain turned friend who is essentially the T-1000 from Terminator. His enemies finish out the cyberpunk feel. It is worth going into some detail here, because the villains are so very cyberpunk.

Rebecca Madison is the head of the evil mega-corporation, Maximum Inc., and plans to eradicate humanity after the construction of a safe haven city called Cyberville is finished. She drives most of the story through her various schemes.

Maxwell Madison Jr., Rebecca Madison’s son, is a sociopath who is constantly running experiments both with the permission of his mother and without. His crazy is readily on display as he attributes many of this thoughts to his cat, Baudelaire.

Graft is Rebecca Madison’s head of security and is excellently voiced by Ron Perlman. This ex-military man lost most of his body during the course of a war and now is mostly cyborg. He is charged with carrying out Rebecca Madison’s plans, but is at his best when he questions her and relates to the Phantom.

Dr. Jak is a TV reporter who follows the exploits of The Phantom in an antagonistic way. Jak is voiced by Mark Hamill, and Hamill’s talent for crazy comes across wonderfully. Dr. Jak is heavily cyborg and has brain augmentations that allow him to share his perspective with the public, although it is often skewed. Jak also actively encourages people to forgo thinking for themselves, and just let him tell them what to think. 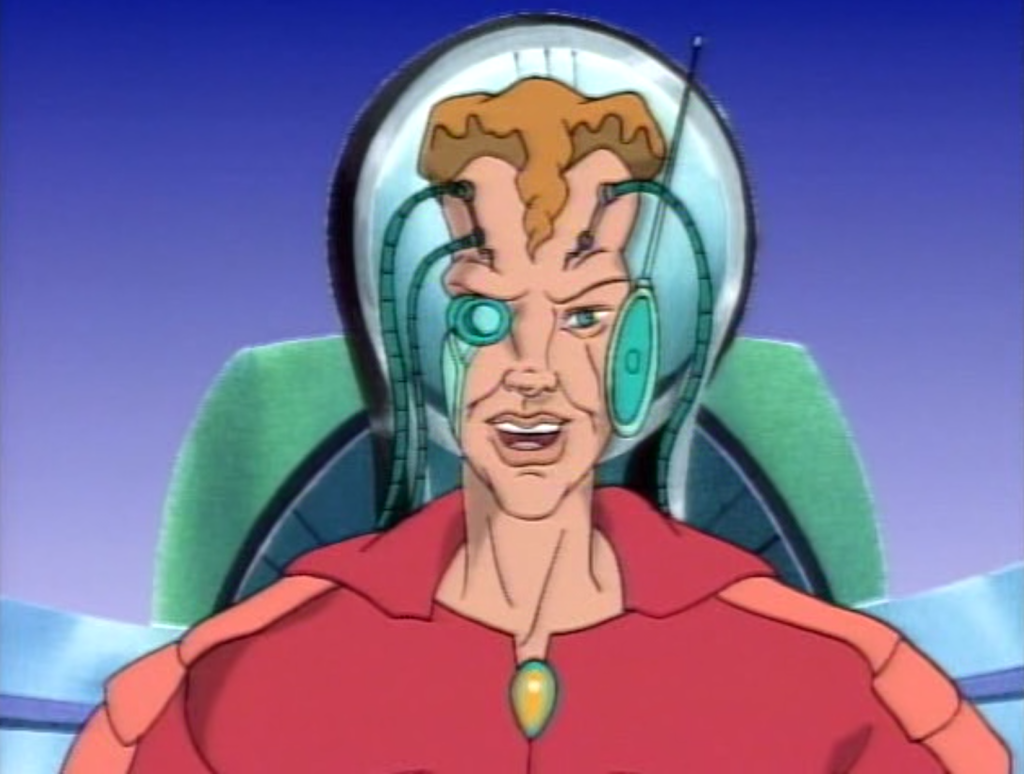 Mr. Cairo is a mysterious information broker that seems to be working all sides during the course of the show. He works for the highest bidder on most occasions. Pardon the spoiler, but in the spirit of bring out the most of the cyberpunk, it is later revealed that Cairo is AI that fragmented off of Dr. Jak’s consciousness.

Vaingloria is a superstar that was created by Rebecca Madison, but her success is because of cybernetic implants that allow her to manipulate her fans.

Maxwell Madison Sr. was killed by the preceding Phantom, Kit’s father, but had his brain uploaded into a computer.

Heisenberg is a robot that was created by Maximum Inc. as a perfect weapon, but fails when it gains sentience. Cyberpunk enough on it’s own, Heinsenberg has the T-1000’s ability to turn liquid, form weapons from himself, and take on the appearance of others. Not to mention elevating the consciousness of other robots.

Sean One is the leader of the Free Orbital Movement and is the villain of one of Phantom 2040’s best story arcs Dark Orbit. Sean One is trying to gain independent status for the Orbital colonies and goes to lengths that include building an orbital weapon to force the forces on the ground to give them independence by force.

When Phantom 2040 aired in 1994, it brought with it a focus on mature storytelling that is rare today, and rare even at the time. The show lulls when it tries to incorporate the Phantom lore into the story, as it feels clunky and forced in the future cyberpunk setting, but when the show focuses on the cyberpunk elements it is one of the best American cartoons that I have seen hands down. The art is excellent for the time and carries Peter Chung’s weird, wonderful look. It is truly a crime then that even though the show ran two seasons, only the first season is available on DVD. That DVD by the way, is only available in Australia (elsewhere now with the internet), and on VHS they released only a handful of episodes.

Written by Isaac L. Wheeler (Veritas)
Veritas is a cyberpunk and writer who enjoys all aspects of the cyberpunk genre and subculture. He also journeys deeply into the recesses of the dissonance exploring his nihilistic existence. If you'd like to contact Isaac L. Wheeler (Veritas), the founder and editor-in-chief of Neon Dystopia, you can do so here: ilwheeler.founder@neondystopia.com
Previous ArticleThe Division: Beta ImpressionsNext ArticleIrving Force – The Violence Suppressor
You May Also Like

The Technomancers will Rise
May 7, 2016
2 Comments