The poster child for character writing and world building in anime, both classic and modern, Evangelion reached out and touched a generation of viewers with its crucifix-laden hand. It drew us into a story and world that actively defied storytelling conventions and challenged our perceptions of what it means to be a human, an individual. What’s important about Evangelion, beyond its immense cultural impact, is that it’s an amalgamation of many parts of Japanese culture and beyond, encompassing a wide variety of differing philosophies and critiques into its rich fiction. 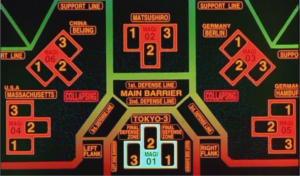 Obviously, Evangelion owes a lot to the mecha and science fiction genres; Hideaki Anno, the critically acclaimed writer and director, worked on 1980’s mecha classic Gunbuster and 1990’s science fantasy Nadia: The Secret of Blue Water, each subsequently drawing from shows like Super Dimension Fortress Macross and Space Battleship Yamato. However, a lot of the concepts seen in Evangelion, such as the structurally shifting Tokyo 3 megacity, the biologically based Magi computer systems, and the strenuous relation between the Japanese government and the private military force NERV, are familiar to those even mildly acquainted with the cyberpunk genre. At a glance, we can immediately see aspects of Mobile Suit Gundam, Mazinger Z, and Ultraman, but delving further into production staff interviews shows that Patlabor, Devilman, 2001: A Space Odyssey, and cold war-era weaponry/hardware served as the basis for the combined aesthetics of Evangelion. To not so subtly borrow our own description of cyberpunk, “High Tech, Low Life” superbly describes the aesthetics and design philosophy present throughout the show, from the grimy, sleazy Tokyo 3 slums in episode four to the towering retractable skyscrapers that make up the downtown/financial districts. The notions of a serious class divide, even in the high castle of humanity that is Tokyo 3 are hard to miss. The Evangelion units embody this aspect brilliantly, with the fantastical prowess of each unit being limited to modern technological standards (the lack of on-board power and limited life support systems specifically). While the technology in Evangelion may draw us closer to “God,” it cannot transcend the limitations presently known to us, reinforcing that same “High Tech, Low Life” philosophy. 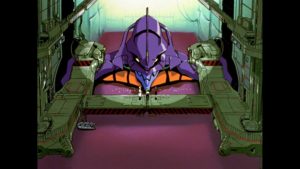 The art of Yoshiyuki Sadamoto and dialogue of Hideaki Anno are a driving force behind this essay – While it’s certainly a little overplayed to have the bulk of your environmental design be a mess of cables spread across the floor and have concrete floors in every room, the subtle touches of Sadamoto’s brilliant backgrounds convey their own micro stories of budgetary issues and laziness across the bulk of NERV staff. And Anno’s biting dialogue lambasts the paltry mechanical limitations of the second rate equipment provided by the governments of the world add an extra layer of cynicism and desperation to the fight for the remnants of the human race. 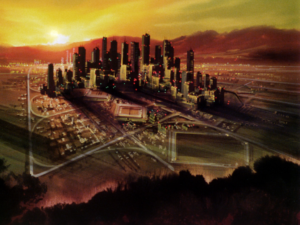 Finally, there’s also the ever-present notion of “radical transhumanism”; SEELE, a secretive cabal of political and corporate leaders (who live greatly extended lives due to cyborg enhancements) are the central antagonists of the show, puppeteering the many different organizations and seemingly toying with the script to bring about what would be described by anyone unfamiliar with Eva as the end of the world. The Human Instrumentality Project, where humanity reverts to its primordial essence to be moved to a single, collective consciousness. It’s a brilliant psychological antagonism that when seen first hand, fills the viewer with a sense of awe and confusion like they’ve never seen. The unstoppable actions of forces beyond the control of the masses, willed and spurred forward by an elite unknown even by name for the ultimate goal of attaining the peak human form through spiritual means rather than technological ones is such a fantastic deconstruction of cyberpunk, and even science fiction tropes at large that in my humble opinion, The Third Impact is the ultimate statement on the idea of an interconnected neural network and how individuality and a connection to the “real world” is a necessary aspect of life that can’t be shunned. 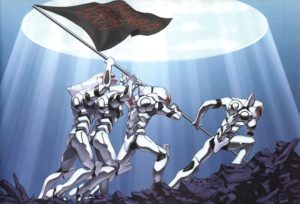 The tropes mentioned above, layered on top of the mecha iconography lifted from Gundam and its ilk accentuate the bizarre, subversive plot of dark gnostic magics and ancient coagulated “aliens”. While not exactly cyberpunk (it’s not exactly mecha either), there are enough smatterings of the genre across this master-class painting that anyone reading this who hasn’t seen Neon Genesis Evangelion would do themselves well to take a gander. The insight one can get into a more foreign viewpoint of transhumanism, the balance of science and religion, and the human spirit makes Evangelion an undertaking worthy of the time of our audience.

You can get a copy of Neon Genesis Evangelion here.