In the last year, the Ghost in the Shell live-action adaptation has been controversial within the cyberpunk community. Concerns have mounted over whitewashing, Hollywoodification of a timeless property, and whether or not this version of Ghost in the Shell has a modicum of a chance of living up to any one of the previous iterations. Neon Dystopia’s staff were so excited to talk about the reveal of a full length trailer for the Johansson GITS that we compiled our responses, so we don’t miss a nuance.

Official synopsis:
Based on the internationally-acclaimed sci-fi property, “GHOST IN THE SHELL” follows the Major, a special ops, one-of-a-kind human-cyborg hybrid, who leads the elite task force Section 9. Devoted to stopping the most dangerous criminals and extremists, Section 9 is faced with an enemy whose singular goal is to wipe out Hanka Robotic’s advancements in cyber technology.

I had a bifurcated response to the new Ghost in the Shell trailer. On one side as a long time Ghost in the Shell fan, I am concerned that the material will stray too far from the source. On the other, there is the potential for one of the most cyberpunk movies we have ever seen here; if it is successful, we may even see more big budget cyberpunk films. The first thing that I noticed, is that the trailer includes scenes from the most iconic moments in the series, and I expected that there would be some of that. We know that at least some of Section 9 are going to appear in the film beyond Motoko, Batou, and Aramaki, such as Ishikawa, but since we don’t see them in the trailer at all except a tiny snippet of a meeting in a room with holographic tech, I am concerned they will play almost no role in the film.  Judging from the opening of the trailer, I suspect that the Geisha scene will appear near the opening of the film, just as it’s partner scene did in Ghost in the Shell (1995). I also noticed that there is nothing that appears to take place in virtual reality, so I don’t think we will be seeing much of that side of GITS in this film. What we can make out about the potential plot is that it is going to focused on Motoko’s identity struggle with a twist. Rather than being about man/machine dichotomy it seems like the focus will be on her identity being taken away by Hanka for some reason, and re-purposed in Section 9.  Although the main villain of the story seems to be Kuze, I suspect he will be an amalgam of the villains from the series. According to an interview over at Collider:

“We’re not doing Puppetmaster. It’s not Laughing Man. It involves Kuze. The Kuze story. The big thing we are doing here is that we’re not necessarily doing an origins backstory, but we are addressing her sense of self and resolving how she defines herself in terms of memories. That’s one of the main thrusts in the story. Inspired by that episode of Affection in Second Gig. It’s bits and pieces of those mixed together.”

The last thing that seems weird, is that it sounds like Motoko is the first full-body cyborg, which flies in the face of how cyborgs have traditionally been handled in the series. We also see Batou without augmented eyes, then later with them. Will we be seeing an origin story for Batou’s eyes? This seems unnecessary, but we don’t have all of the details yet. Things that we can be sure of though: Motoko’s bisexuality is going to be explored, there are going to be lots of great street scenes, and there is going to be some new iconic cyberpunk imagery in this film.

As a die hard Ghost in the Shell fan there are things that I immediately recognized in the trailer that’s lifted from the ’95 movie and Innocence, particularly the rooftop dive, the boat conversation, and the glitching geishas. There are even hints to Arise, like Motoko’s red suit, which I didn’t expect to see considering how recent that series was. And if I’m right in guessing the mysterious speaker at the end is Kuze, this is going to be an amalgam of Ghost in the Shell historical points, remixed to make something different. From what little is seemingly revealed about the Major’s past, it’s going to take a divergence from the source material, which makes me call into question the whole thing.

Granted, I’m someone who was against this adaptation since it was in development hell, and the announcement of the cast didn’t do anything to convince me; these are actors I’m never motivated to follow from movie to movie. To win me over this had to do a lot, and honestly had this had another name attached to it I’d be all in. There’s classic cyberpunk aesthetics with influence from other anime like Akira in ways I never imagined a big budget movie would attempt for fear of moving away from tested formula. But there it is, visually striking at every turn by blending the familiar with the original. And even though it looks great it still feels wrong.

Honestly, anything short of a shot-for-shot remake of the ’95 movie would’ve gotten criticism from me anyway, so I’ll be reticent in my condemnation for now and say I’m approaching this with an open mind. Until I actually see it I’ll just say that this movie, regardless of what it turns out to be, will be dripping in style if this trailer is any indication. 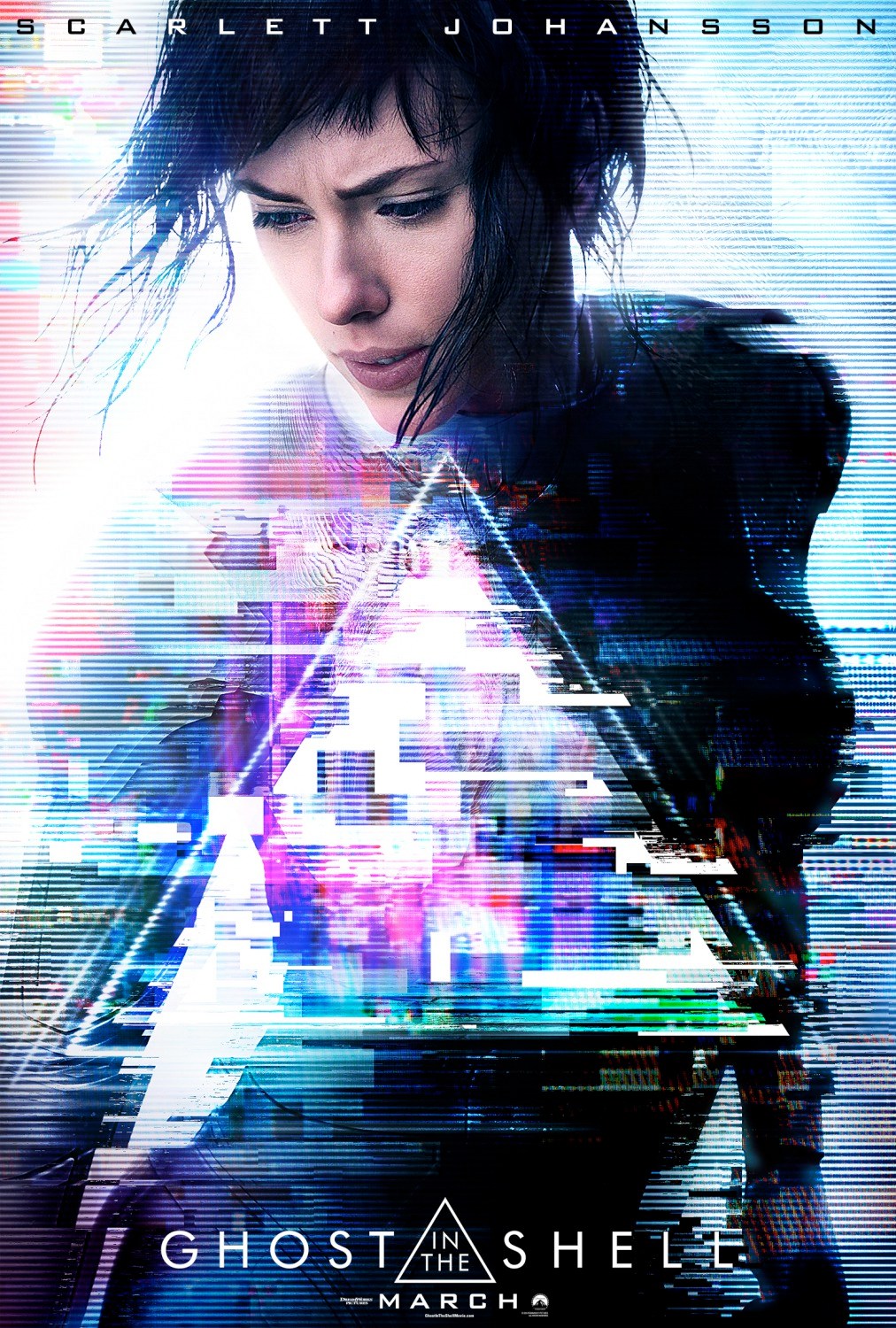 Alright. I’m in. When Ghost in the Shell was announced to be in production, I was hesitant. While not entirely on board the anti-whitewashing wagon I did have my doubts as to how they would portray the characters despite Scarlett Johansson and Takeshi Kitano both being two of my favorite actors. The teaser for this trailer was the iconic fight scene between the Major (Kusanagi) and a would be thief that we all know and love from the original anime. It got a lot of good reactions but I was still not entirely convinced as it has been a pattern of some really great trailer footage leading to terrible movies.

After seeing this full trailer though, as I said before. I’m in. The use of familiar scenes including the fight scene, the raid of the tea room, and seeing Batou get to do what he does best has me on board. I can’t entirely say I’m convinced that this won’t end up being a mixture of a western take on an beloved eastern film filled with missed opportunities to explain the philosophy that has made Ghost in the Shell one of the most cherished properties from Japan. But I’m more willing to give it that chance and hope that the audiences are open to fully immerse themselves into this world as they did for Inception.

While Rupert Sanders is not the director I would have chosen given my dislike for Snow White and the Huntsman, his short film work shows promise. His use of angles and lighting in particular shine through in this trailer. The color scheme is amazing and some of the shots we get of the cityscape look to be a very good rendering from the source material.

I also am enjoying the “twist” if we can call it that with the sound bites that we get from Kuze, “They did not save your life, they stole it..” If you have read the source material than this is represents an encompassing statement. It shares the mystery of what Major Kusanagi feels about her life while also slightly hinting that there will be more of a nefarious twist to this story. Certainly an intriguing take if pulled off correctly. Hey if Mamoru Oshii says it’s cool and, “the most gorgeous film in the series”, I’ll take his word for it.

Despite Mamoru Oshii’s blessing and impressive visual design, I remain more than a little skeptical of the final product. Scarlet Johansen is not an especially good actor, and I doubt that she has the skill necessary to truly capture the nuance of the Major’s multi-layered character. The setup is also more than a little baffling, being an amalgamation of the movies, Stand Alone Complex, and the manga. Just by watching the trailer, it felt like they had picked out a series of visually distinct and appealing imagery from the source material first, and had then worked up a script to justify those set pieces. Also, the cut that Mr. Oshii has seen might end up being one that isn’t representative of the final product, in classic Hollywood fashion. While it’s too early to write off the entire movie, I feel like we should all keep our expectations in check.

Now that you know what we thought, let us know what you think in the comments or on social media.

Written by Chris GST
Doing whatever it is I do. Generally involves tech or politics. Sometimes I blog or podcast about men in spandex and cyberpunk shorts and films. Follow on twitter at http://twitter.com/cgstong
Previous ArticleThe Early Life of the Word “Cyberpunk”Next ArticleWestworld Pays Off For Fan Theorists, Points to Bigger Things
You May Also Like

Erase Negate Delete’s Disconnect Fuses Riffs and Rock with the Digital
May 30, 2016

A Conversation with Eliot Peper, Author of Cumulus
August 29, 2016
11 Comments