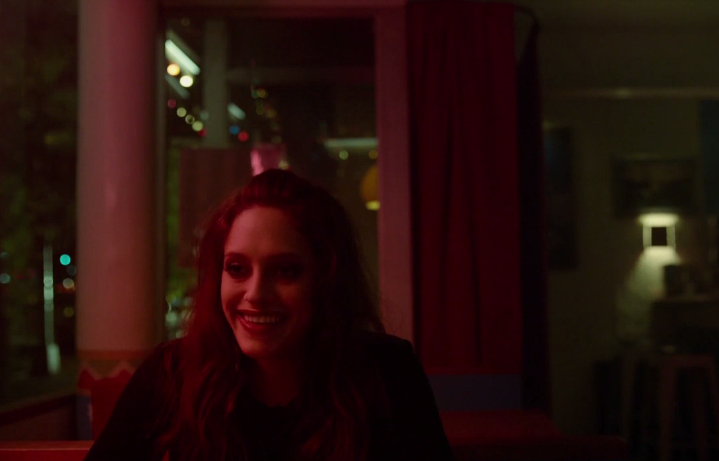 Mr. Robot steps aside so lovers can embrace in peace as the darkness that follows revolution encroaches, but helping hands are there to help drag us back to reality. 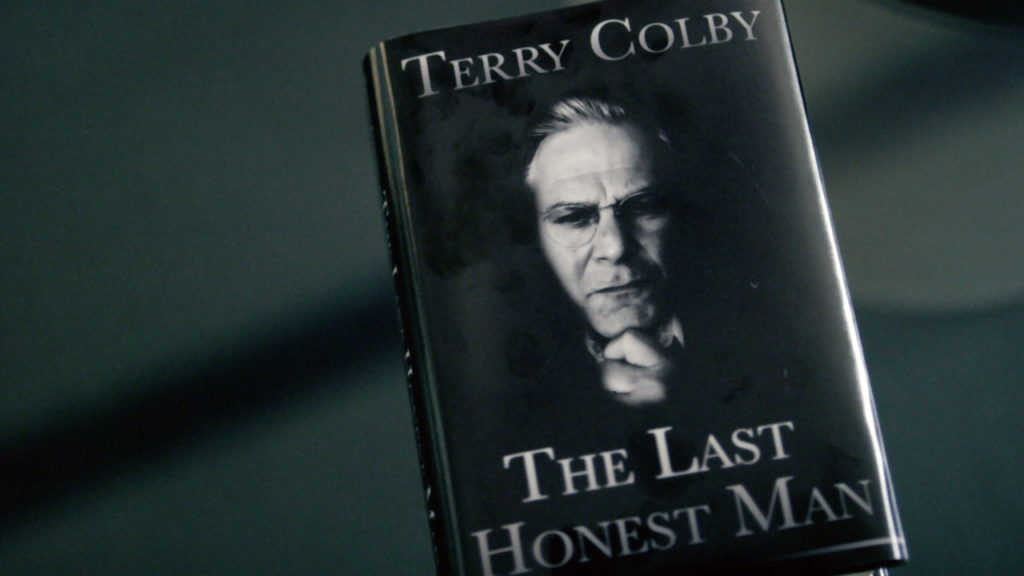 Terry Colby has found life after business by appealing to the masses and their call for accountability with a new book. With The Last Honest Man, Colby’s spun his ousting from Evil Corp as a call from his conscience and is now considering a future in politics. He might even take a place on Donald Trump’s presidential ticket, given how much dirt he’s got on the real estate mogul. Price, who isn’t impressed by his friend’s new path, calls in a favor from Colby: reach out to his friend, the US ambassador to the UN, to abstain from a vote that will allow China to annex the Congo. Though Colby is reluctant to agree, and is astonished at Price’s latest project, he simply must know why the CEO’s fixation with power has pushed him so far as to aid the destruction of international borders. Price is candid; he declares that power, the kind that rivals God, is the only ambition in life worth chasing.

After being picked up by Joanna and Mr. Sutherland, Elliot’s forced to help this frustrated housewife locate her missing husband through a cell that’s receiving mysterious calls she believes are from him. Mr. Robot urges his sympathetic other half to cut and run, but Elliot knows Tyrell’s fate and wants to at least give Joanna some peace of mind.

Cisco returns home with Vincent, one of Darlene’s new recruits who he found in the Jacobs’ home. Vincent’s been beat close to death. He’s bleeding internally and is unresponsive. Darlene contemplates letting her soldier die since he knows her face and fsociety’s intimate details. But in a rare show of force Cisco yells her back from this destructive ledge and they carry him off to an emergency room. 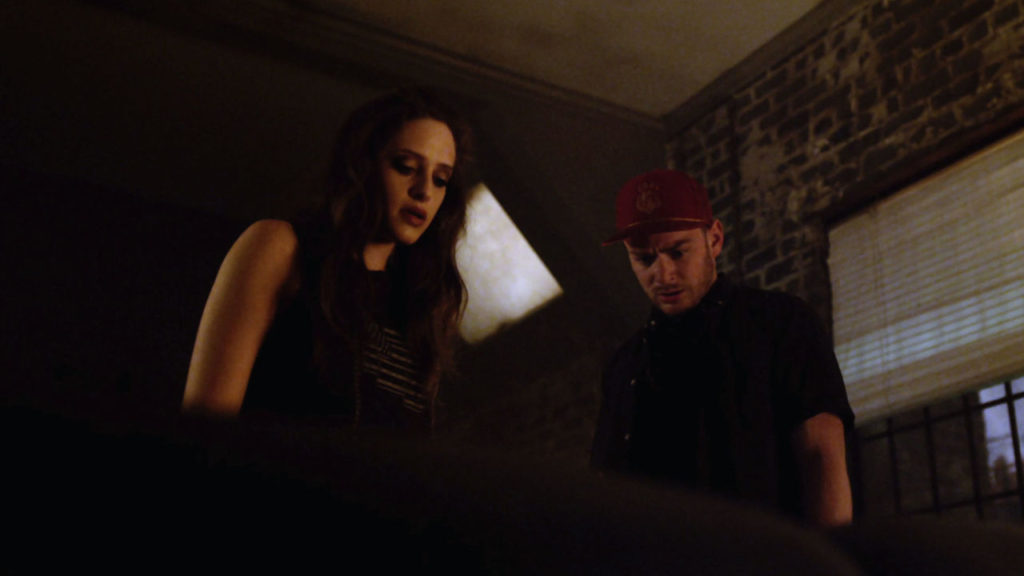 Following the “ball drop” on Capitol Hill, the secondary fsociety crew gets caught on their way out of DC. It doesn’t take long before they tell the FBI they were supposed to meet at Susan Jacobs’ house. Evil Corp thinks their lawyer is on vacation, but the state of the house makes it seem she’s missing. When Dom arrives, fellow agents point her to a witness who saw two men leave not long before the feds showed up. She takes a sketch from the eyewitness which matches Ollie’s description of Cisco. Santiago refuses to entertain her ideas, and instead of keeping quiet puts out a BOLO on Cisco, plastering his face on every screen in New York. But to keep his agent happy, he points her in the direction of a cab that drove Cisco and another man from Jacobs’ house. It’s a solid lead, and in no time an FBI team is standing in Cisco’s apartment, but Dom’s man isn’t not home. All that’s left behind is his work ID from the New York Public Library. 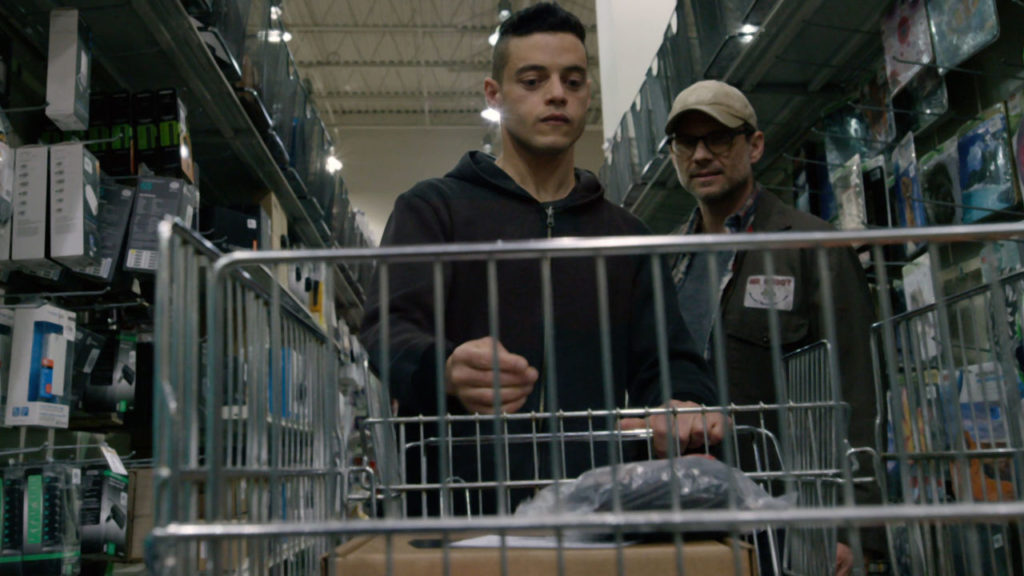 Elliot shops while Mr. Sutherland plays a floor demo of Watch_Dogs. Mr. Robot tries to turn Elliot’s attention back to Evil Corp, which is pushing their new currency hard, offering consumers discounts on everything if they pay with E-coin rather than dollars. But he’s committed to this one favor before getting back to work. When Joanna’s cell rings, Elliot answers and listens to some frustrated breathing before the call ends. He imagines it’s Tyrell. While he’s distracted Mr. Robot seizes the moment and runs away.

The seriousness of their situation put into perspective, Darlene tells Cisco of the famous Alderson family trip to Coney Island. She was kidnapped by a woman who’d doted on her for an entire day and seemed to intend to want to keep her as a daughter. A five-year-old Darlene was overjoyed with the thought of a mother other than her own and the absence of a father that had neglected her. Ever since the police rescued her and returned her to the Aldersons, Darlene has wondered what her life would’ve been like had the kidnapper kept her, then admits she’s comfortable with how things have turned out because she couldn’t have gone the rest of her life without Elliot. Without him, none of fsociety’s ambitions would’ve been realized, and he’s the one they need to move forward.

Back home, Elliot sets up his new equipment and screens messages from Claudia Kinkaid (Angela) who asks to meet him. Mr. Sutherland watches as Elliot impersonate a detective and gets the NYPD to use their power and trace the blocked number calling Joanna. The bodyguard is impressed by Elliot’s capabilities, and tries to have a heart-to-heart about the many rich eccentrics he’s worked for over the years. Elliot can’t stand it, and asks us if we know why Mr. Robot’s gone, whether he can be trusted after all. Mr. Robot wanted to come home badly, and Elliot wonders if there’s something he can’t see in the apartment that Mr. Robot needs. When the NYPD pulls through, Elliot has an address to a home on 92nd Street which is where the calls are originating. Mr. Sutherland can’t believe the address is where Tyrell is, but he snaps a pic anyway and bolts for it. 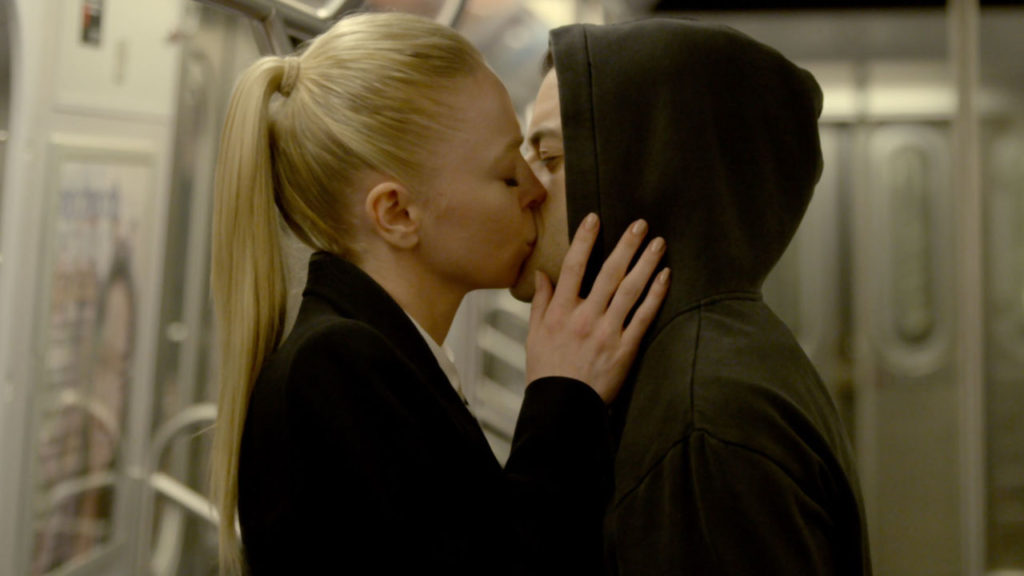 Elliot uses this opening to meet Angela on the subway. The stress of the FBI hounding her is too much, and she decides to tell them her role in the FBI hack and the exposing of Operation Berenstain. She promises not to turn on Elliot or Darlene, but begs him to ignore Mr. Robot. He can’t be trusted, and Evil Corp can’t be defeated. She argues that they’re both just running out the clock before being caught or killed. After a tearful goodbye, Elliot disembarks. When the train’s back in motion, Angela’s approached by a mysterious couple.

Waiting on Vincent drags on him, so Cisco takes Darlene to a diner nearby. To her, it’s clear the Dark Army won’t respect any arrangement they’ve made. They likely killed Trenton and Mobley, and could’ve attacked Vincent. Who’s to say they won’t be next? Darlene tells Cisco it’s their last chance to flee New York with their lives, and from afar perhaps they can find out for sure what became of the rest of fsociety. Elliot can manage on his own; he’s the one they respect and need for Phase 2.

As Cisco tries to calm her some more, and succeeds, the FBI responds to a call from the hospital. The on-duty nurse describes Cisco and his female companion to the agents. Santiago thinks the couple’s on the run, but Dom’s intuition tells her they’re nearby. Racing down blocks with flickering lights, she finds her way to the diner where Cisco and Darlene are and calls for backup.

Not wanting to give them a chance to escape, Dom races in to confront the couple at their booth and encounters resistance from Darlene. In no time, a pair on a motorcycle race up. The passenger hops off and fires directly at the three of them. A combination of gunfire from cops and Dom take the gunman down as he limps away. Dom, drenched in blood, tries to make sense of this bedlam as the second assassin races away from the scene on his motorcycle. 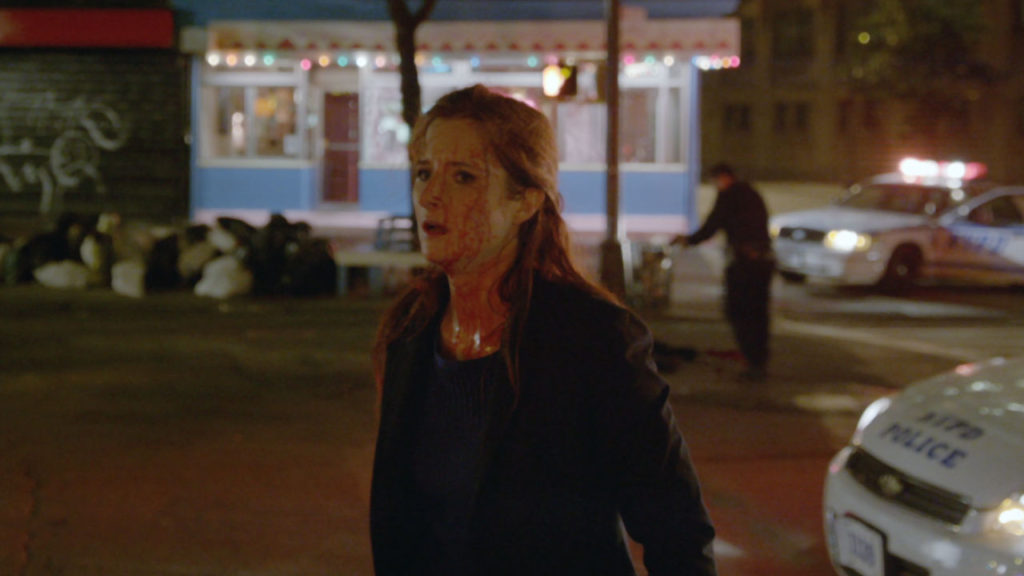 Tension emanating from all angles this episode left me physically uncomfortable. The fear from the pilot, when all this psychologically-bent plunge into the evils of corporate America were new, came rushing back. Mr. Robot seems to be back on all its messages at the same time, and all that unease comes down to the implied and expressed contracts in society, between people, and how, regardless of how all parties involved feel, it can be torn apart without warning. It’s reminiscent of a talk Ray gave Elliot in concerning the pointlessness of making plans, of seeking control in order to illuminate the darker parts of life when stumbling is the only way to cope with life. There’s a lot of unload there, but again, as is typically the case, it’s explored best through the Alderson kids.

There’s been a lot of focus on Elliot’s mental illness, and some confusion as to whether or not the abuse he remembers from his parents was his own. Only recently has Darlene been explored to shed light on her own trials. But the more of her is exposed the more that I start to question if the Alderson family plays a role similar to that of Evil Corp. In the way the Evil Corp is a microcosm of American corporate giants, taking notes from conglomerates like Wal-Mart, Goldman Sachs, and, undeniably, Enron, it’s clear that the show’s commentary on this aspect of capitalism isn’t just about certain companies but on corporations of a certain size and influence across all markets. So could the Aldersons also be commentary on the condition of the traditional American nuclear family rather than a presentation of a particular, fictional family? 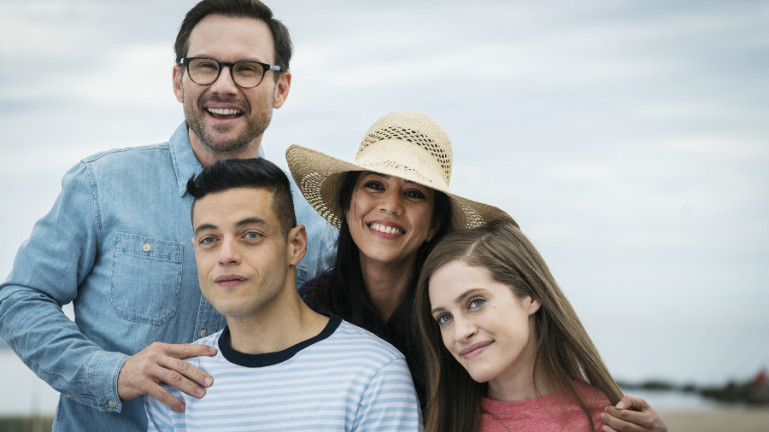 Domineering mother, neglectful father, disaffected son, abused daughter–for all the happy appearances in the Coney Island photo we now know that it’s the most misleading relic of the Alderson family we’ve seen to date. At some point after that picture was taken, Darlene’s dreams were fulfilled when she was stolen from her family and introduced to the possibility of living her life away from them. Essentially, Darlene exposed any fleeting happiness first introduced through photographs and memories were feigned; inside she always wished to be dragged off somewhere far away from the horror show that was their home.

While there’s a lot there to be unpacked, and if it’s truly illustrative of Mr. Robot’s commentary on the American family it’s worthy of its own post, it does reinforce the continual perversion of American perceptions of their society and how it filters their understanding of reality that’s displayed throughout the show. As far as Mr. Robot is concerned, Americans don’t see the US for what it is, and that ranges from impossibly big conglomerates to the basic interactions between people. Everything is obfuscated, just take a look at Colby’s book cover. No one can be trusted, nothing can be relied upon, and reality violently rips us away from any instance of happiness. And when we take a step back and look, like Mr. Robot has been asking its audience to do, what’s more honest about the American condition than that?

Written by Daniel Rodriguez
Daniel Rodriguez is a freelance writer and author from New York City.
Previous Article‘What could be a more genuine case than a murder investigation?’: A Review of Independent Investigators Inc.Next ArticleLast Week in Cyberpunk 9/9/16
You May Also Like