Thomas Anderson leads a dual existence. By day, he’s a cubicle worker at a respected software company. By night, as Neo, he’s a hacker. And a good one. Neo sells his skills to shady characters for cash on the side, but his real efforts goes into tracking down a man, a man called Morpheus. Morpheus knows a secret. He knows the answer to the question. The question is, ‘What is the Matrix?’ Soon Neo will know the answer too, and in doing so will be forced to confront what knowing really means. Mr Anderson is about to follow the white rabbit and at the end of the hole is the truth; about how dual existence really is.

Whether it was alien invasion (Independence Day),  end of the world (Armageddon), space horror (Event Horizon), action comedy (Men In Black) or appallingly cheesy (Lost in Space) there was something for everyone’s taste under the SF umbrella. Unless of course, you were a cyberpunk fan, in which case pickings were slim. Real slim. Very, very slim. Devotees of our beloved pie piece had to look hard to find a quality kernel and when they did it more often than not it came buried (or smooshed) in with a selection of other genre and subgenre elements.

Then we got The Matrix.

The Wachowskis first solo movie project, on which they acted as producers, directors and screenwriters, offers up everything you could possibly want and need from a cyberpunk movie in a neat and stylish 2hr and bit package. For your money you get the following: hacking, the dark web, sentient programs, post-apocalyptic dystopia, evil robots, musings on human nature, a nice twist on the man machine interface, pervasive and sinister surveillance and a conservative politician’s dream example of the potential pitfalls of renewable energy. And that’s before all of the martial arts. Lots and lots of martial arts. I mean really lots. Really.

The Matrix is pretty striking. The special effects are of high quality for the time of production and are appropriately used within the correct context. While it’s undoubtedly sci-fi and there are, as mentioned, representations post-apocalyptic dystopia and robots, it manages to stay away from some of the excesses of its contemporaries. Essentially, post-apocalyptic hellscape scenes with evil flying robots get you CGI, whereas a shootout in a marble lined hallway will get you exploding walls made out of well decorated polystyrene sheets. You get the idea. There’s also no spoiling caused by the current penchant for the horrible overuse of product placement, some phone tie-ins with Motorola aside. The emphasis is on the styles we love rather than the brands we know. A recurrent theme in cyberpunk is the strident progress of mass commercialization and the ascendancy of the corporate world but here the theme is used almost in reverse. The lack of consumer symbols and trappings seems a little off and bit inauthentic. A nice touch considering the subject matter.

Justifiably held up as both original groundbreaking, The Matrix went on to win almost every technical category film award after its release, beating those aforementioned contemporaries that couldn’t leave well enough alone. It pioneered a number of innovative and dynamic techniques that have gone on copied innumerable times in various forms of media, even to the point of parody.

And where it doesn’t innovate, it improves. The film is one of the first successful examples of a mixture between mainstream Western studio production and East Asian action cinema. The fantastical fight scenes are a direct product of this pairing. Famed stunt co-coordinator Yuen Woo Ping steps straight out of Hong Kong and into Hollywood, bringing his considerable bag of tricks in its entirety and letting them all loose one by one. And what we get, is Bullet Time. Can you believe there once were action films that didn’t have it? Well, you’d be forgiven for thinking so, because again it’s a trick that has come to be very overused in later media, once again to the point of round mocking in places, but in it’s initial incarnation it is definitely something to seen and be appreciated. You just have to remember that The Matrix got there first, and was doing it before it was cool. 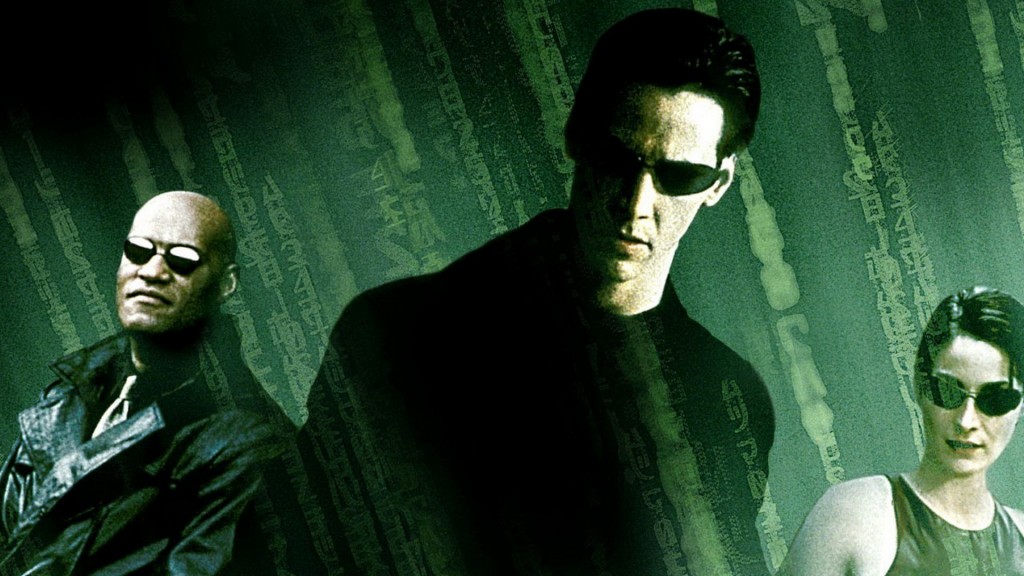 The headliner is Keanu Reeves, fresh off of Speed and you know exactly what I mean so just don’t. Easily the biggest star with his solid A/B+ status, coming from a respectable, if not stellar, list of Hollywood credits in action films. He is ably supported by Laurence Fishburne, Hugo Weaving and Carrie-Ann Moss taking the other lead roles of Morpheus, Trinity and Smith respectively.

Fishburne oozes a smooth and mysterious cool as Morpheus, mysterious online legend with the Matrix and tough resistance leader on the outside. Mr F. does a fine job of capturing his dedication and belief in his cause, showing a nice range of physicality and emotional representation. He clearly put a lot of effort into his training for the action sequences, channeling his inner zen amongst a battery of flailing legs and fists.

Moss by her own admission owes her entire career to starring in this film and does a pretty solid job of portraying Trinity. That being said, her acting is not altogether without its wobbly moments and while it would be extremely cruel to call her wooden, she is often a bit too placed and precise. This has the slightly jarring effect of her character being worn rather than lived and lacking in natural flow, but in the grand scheme of things it’s not a deal-breaker.

Hugo Weaving is excellent, jumping clean out of the screen as Agent Smith, the sentient program with a disturbingly human streak of malice and just a little touch of general crazy. Weaving is pretty seamless throughout and in my mind this role always marked a big step change for me, but that’s admittedly that’s probably because the last thing I remembered him from beforehand was Pricilla Queen of the Desert. 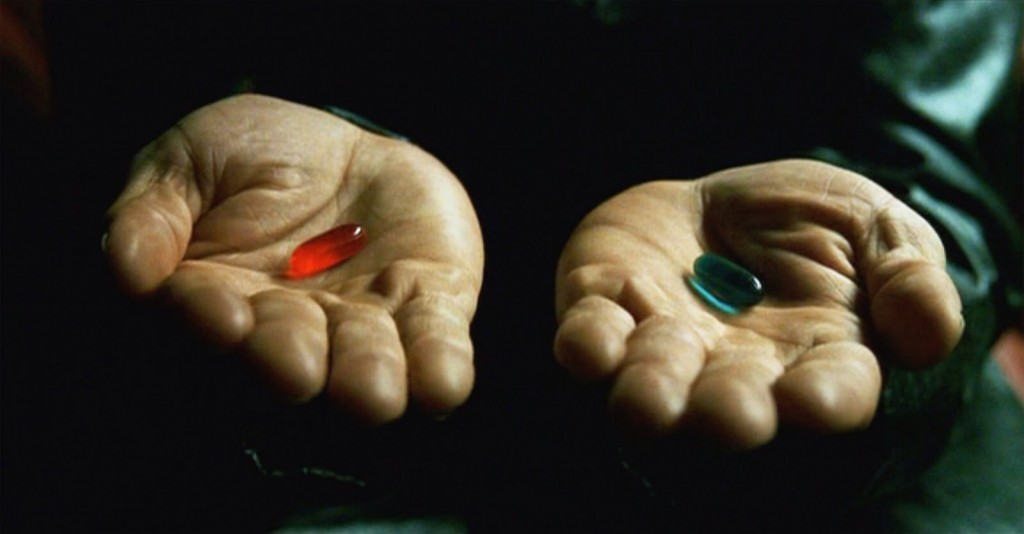 Critics of The Matrix called it derivative, focusing on its premise being formed and constructed out of many tried and tested genre elements, the inference being that doing so didn’t bring anything new to the party. To be honest, said critics may have had a point and it is hard to miss the bits and pieces of Blade Runner, The Terminator or even Total Recall. However, the result of this assembly definitely isn’t just some content heavy mess. In fact, we get a great synthesis of all the required genre elements in one sitting and forming something greater than the sum of it’s parts. It’s probably the first (good) movie to truly pull this off and if today you saw a similarly good film then you would probably say ‘It’s like The Matrix,’ making it a baseline against which all similar offerings are to be judged. Essentially, it’s a piece of cyberpunk gold. Shiny, shiny gold.

In a world where there were no pre-release leaks or offerings of a billion different trailers to view online (this was before Google people, I know it’s hard to believe) the impact on the unsuspecting public and the general scene at large was a damn solid one. I shy away from calling it a Star Wars moment because as it just so happened, there was an actual Star Wars moment looming massively in the background, ready to launch headlong screaming into people’s faces like a Gungan thrown off a podracer windscreen. But it The Phantom Menace was the year’s huge all-conquering SF juggernaut then The Matrix was the cool radio station playing sweetly in the cab. Cyberpunk had arrived and it arrived in style, a style that in my opinion still holds up pretty well. 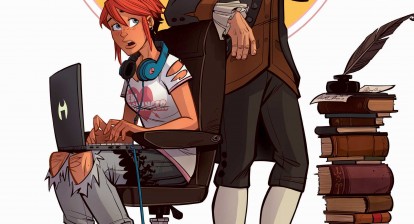