As a New Yorker, born, raised, likely microchiped to prevent me from leaving the city, I’m no stranger to seeing alternate versions of places around me. New York is always the city in the movie poster where some infection has taken root, where monsters rampage, where prisoners are dumped to live in a lawless colony, and any attempt to replicate the reality around me with an alternate usually falls flat. That changed when I heard “Edelweiss” sung like a lullaby as the swastika and stripes of the Greater Reich flag wave by. 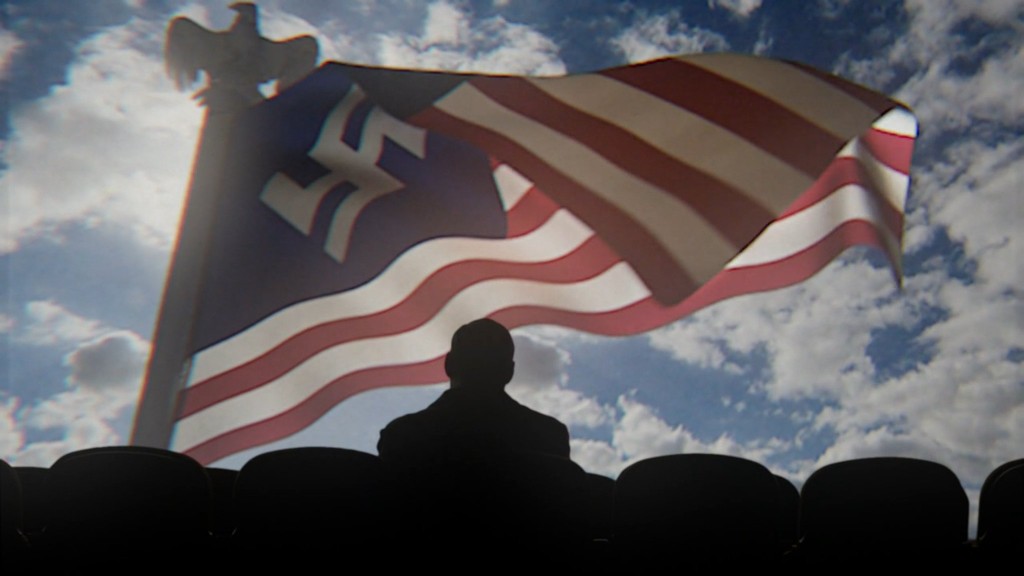 The Man in the High Castle is an espionage and political thriller that takes place in an alternate 1960s America that is divided into three territories: the Japanese Pacific State to the west, the Greater Nazi Reich to the east, and the Rocky Mountain states, known as the Neutral Zone, acting as a lawless DMZ between either superpower.

In the Pacific States, Juliana Crain, comes to posses a film reel that had once belonged to her sister, Trudy, which she views after witnessing her being gunned down in the street by the local Kampeitai authorities. From the reel she sees an alternate reality where the Allied Powers won WWII, and America retained its sovereignty. This prompts Juliana to leave her boyfriend, Frank, a Jew in hiding, assume Trudy’s identity and travel to Cañon City, Colorado to meet with the people waiting for her sister.

New York native Joe Blake has given up his mundane life to become an operative with the resistance, an underground movement working to dismantle the both superpowers. Though this is the story he gives his contact, Joe’s actually an SS spy sent to identify resistance members passing around film reels produced by The Man in the High Castle. After proving himself by killing a Nazi during a raid, Joe is given a truck with secret cargo he is to take to other resistance members in the Neutral Zone.

Both Joe and Juliana meet one another in the Cañon City, and, while oblivious to one another’s true identity, begin a fleeting relationship. 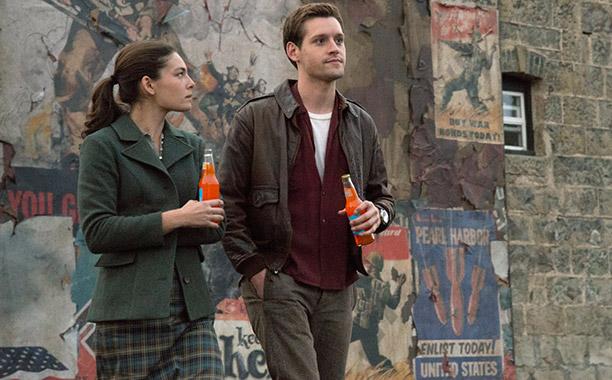 Driven by the prophecy as told by the I Ching, Nobusuke Tagomi, a Japanese official in the Pacific States, works surreptitiously with Rudolph Wegener, a Nazi war hero and SS operative. Both Tagomi and Rudolph worry over Adolf Hitler’s declining health, thinking it will be the cause of another world war. Rudolph, repentant over his actions in the war and seeking to atonement, and knowing that Hitler, with his superior technology, will use nuclear weapons to decimate the Japanese Empire, helps Tagomi undermines the Germans so the Japanese may retain power. 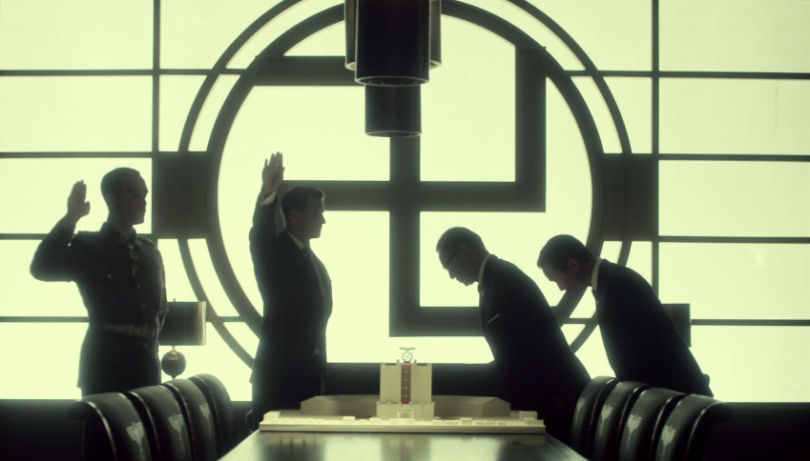 Though the show is set in the same period in which it was written, it certainly feels like a future that, in many ways, we never reached. Clean and efficient monorails in New York, supersonic jets for commercial travel–it isn’t futuristic, but the technological advancements on display echo many of the insecurities the Allies had about the Nazis during the war. Their victory in this reality allowed them to develop further.

But the true mark of victory of either superpower is visible through images rather than tech. There’s a beautiful perversion to images and customs of the Greater Reich that hit you harder than what’s going on in the Pacific States. Asian cultures have a strong presence in California today, certainly in cities like San Francisco. An extrapolation of that is what is shown here. Surely in the ways the Kempeitai treat non-Japanese one can sense the wrongness of what has gone on. But on the surface, it doesn’t seem as bad as what goes on in the East. Even Juliana has adapted to a great deal of Japanese culture. It’s even the norm. 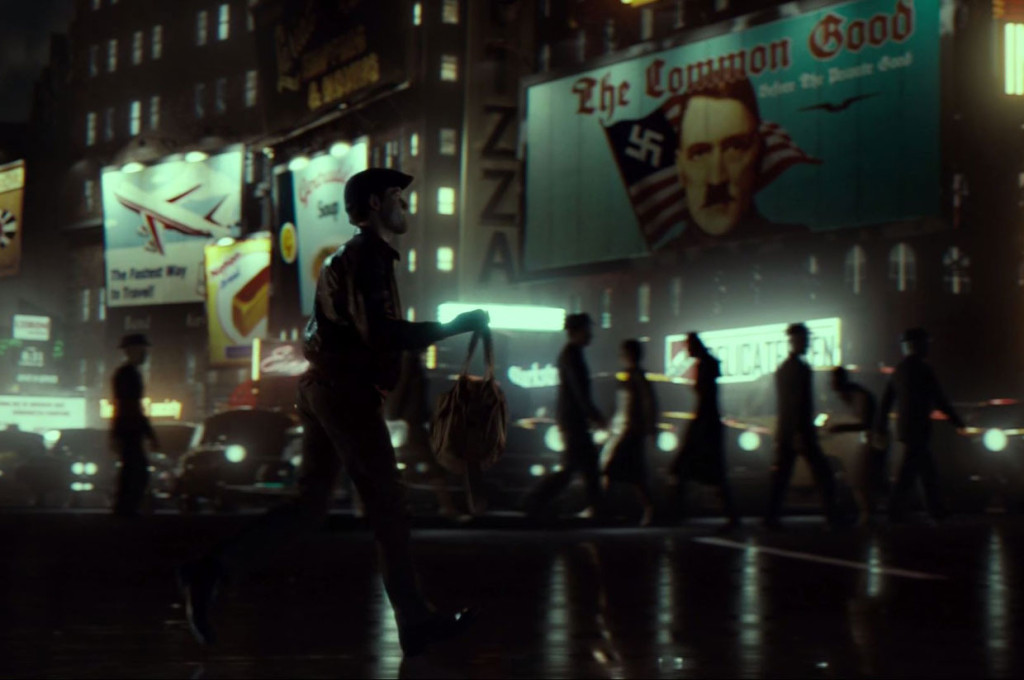 The brilliance of what has gone on in New York is the subtlety with which it’s presented. It’s not an oppressive nightmare the Greater Reich has established, but rather warped Americana where iconography communicates something sinister about this new normal. And no episode gets it right like the pilot, where Joe sees ashes dancing in the sky like snowflakes and asks the officer who helped him deal with a flat tire what he was seeing. The officer, still jotting down in his log book, says, “The hospital.[…]Tuesdays, they burn cripples, the mentally ill–drag on the state.” then bids Joe a good day.

Passivity in the face of such bleakness, that nihilistic acceptance of things being dreadful because they are was powerful in that moment. Too bad it didn’t last.

Performances in The Man in the High Castle are hit and miss, as is the writing. While these are heady ideas that are presented throughout the ten episode run, they are really only covered in about three. The rest is there for the spy play between Rudolph and the Greater Reich, and Juliana and her personal circle back in the Pacific States. And while the filler that’s there can be gripping, such as what happens to Frank’s family, some truths Juliana uncovers, the evolving nature of fate in the face of war, viewers are basically baited with a promise of more consequential story in season 2. That’s about ten hours of story that doesn’t conclude in any significant way. 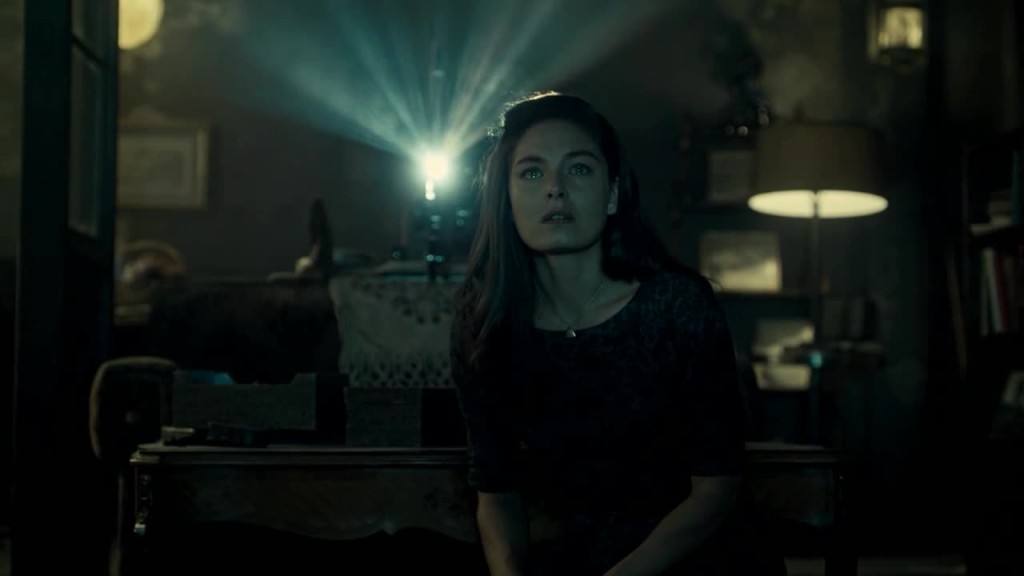 Philip K Dick has a wealth of support and admiration from people in these circles because his work laid the foundation for what would eventually evolve into cyberpunk. And though I have issues with his writing as a reader, there’s no doubting that his mind was filled with complex and convoluted ideas that tried to marry science with the esoteric. That is the case with this adaptation, and the reality presented feels lived-in and real, but rather than adapt a two-hundred-page novel faithfully, Amazon has attempted to stretch out the novel as long as they can despite the source material not supporting it. I get that’s the formula, a way to recoup investment in a project, especially for the weird corporate venture that is original content from what once was a warehouse distributor and online retailer, but it doesn’t make for good storytelling, even with PKD handing you the premise.

You can watch The Man in the High Castle here.

Written by Daniel Rodriguez
Daniel Rodriguez is a freelance writer and author from New York City.
Previous ArticleÆon Flux: Series Review (10/10)Next ArticleThe Cyberpunk Side of David Bowie
You May Also Like