Listening is a cautionary science fiction tale about the dangers of developing a technologically based telepathy. The movie is the directorial debut of Khalil Sullins and shows that he has a lot of potential as a screenwriter and director. Beyond being a story about the invention of telepathy, the movie’s major theme is sacrifice. The movie explores sacrifice on the level of heroic sacrifice, which is something you rarely see outside of superhero movies and mythology. 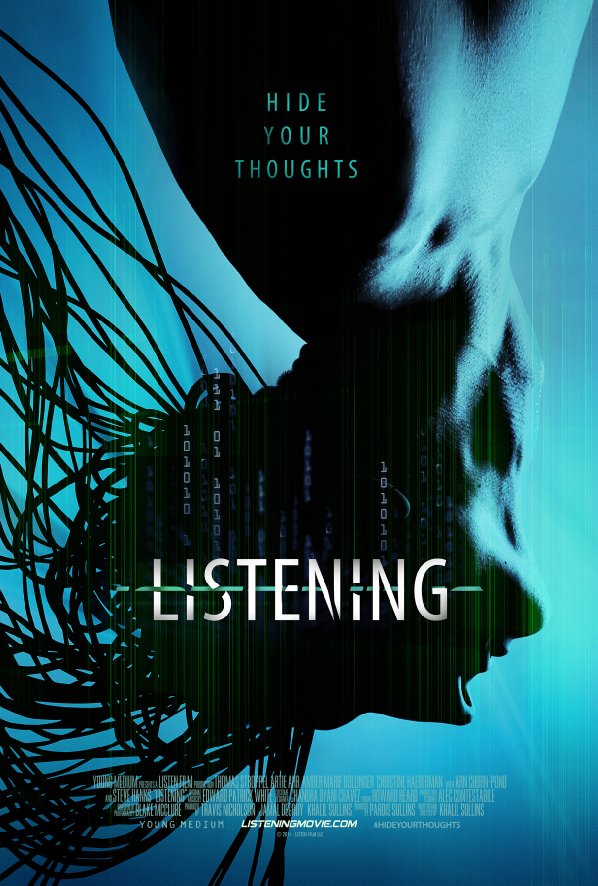 David and Ryan, the films protagonists, are grad students that are working to decode language through a brain-computer interface. They are forced to develop their project in secret, in David’s garage, because of the ethical problems with experimenting with human subjects. This also means the project isn’t receiving funding from the university and so David has stopped making rent payments on his house in an effort to supply some. Another way that David and Ryan have cut corners is to steal computers and other equipment from the university. Ryan meets Jordon, another grad student who is working on similar research and recruits her to the team against David’s protests. With her help, they are able to exponentially increase the number of neurons that they can access through the use of nanotechnology in the brain, but the computers are not fast enough to translate the amount of information they are inputting. To overcome this, they connect two brains together to obtain the processing ability required and invent telepathy, the ability to read each other’s thoughts. This leads to conflict as both Ryan, who cares for his ailing Grandmother, and David, who has been failing to live up to his familial expectations, both begin to experience significant monetary issues. This leads Ryan to pitch the project to a venture capitalist behind David’s back. The story then spirals out of control as their thefts come to light, and the government steps in to use their technology for military purposes.

Sacrifice in Listening is explored from a number of perspectives in the film, first and most obviously this takes the form of money. Both David and Ryan are living in relative poverty. For David, this takes the form of David failing to pay rent and putting his family’s future in jeopardy. For Ryan, this takes the form of living in a one room apartment with his grandmother who he is struggling to care for. This struggle even spills into the relationship between David and Ryan, when Ryan steals food from David’s fridge to feed his grandmother. It is also important to note that Melanie, David’s wife is also sacrificing for her family. She works a minimum wage job at a restaurant and works extra shifts to help pay the bills, all the while putting up with David’s focus on his project and neglect of the family. Later in the film, Melanie issues an ultimatum to David, where he has to choose between his invention and his family. Because David has faith that his invention of telepathy will garner a large amount of money, he chooses to continue work on the project and hopes to win back his family in the aftermath, another sacrifice for his work. 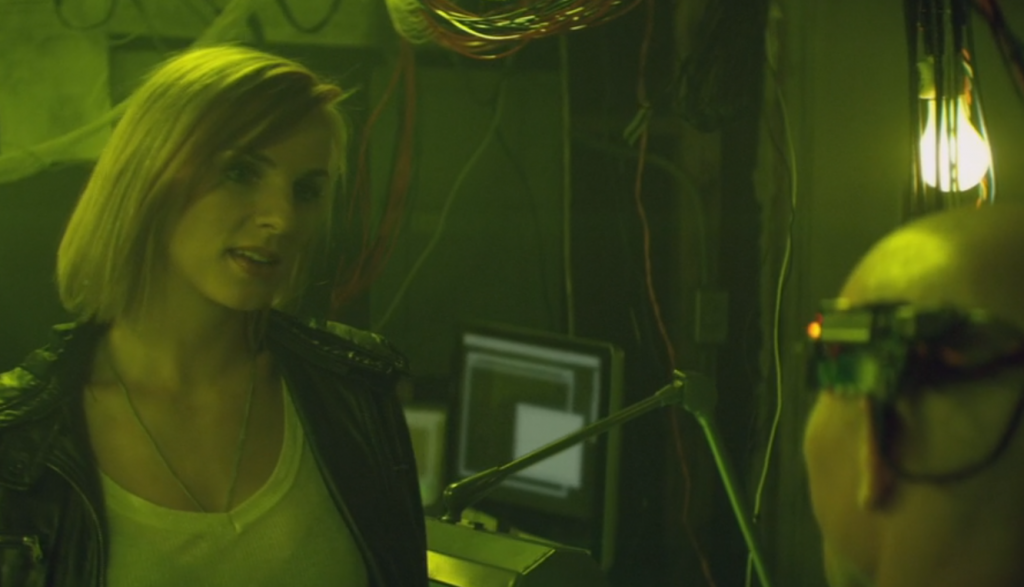 In the second half of the movie (spoilers ahead) David learns that his invention is being weaponized against the free-will of the population and he decides that for the greater good he must destroy his invention, but in order to do so, he has to overcome the telepathic surveillance under which the government has put him. In am amplified version of his first ultimatum with Melanie he tells her his concerns and that he plans to do something about the problem which he has created, systematic oppression of the free-will of society. Melanie, asks him to sign divorce paperwork. David signs the form, not because he doesn’t love his family, but because he wants to insulate them from the fallout of what he has to do; destroy his invention. David then escapes from the military and goes overseas to a Buddhist temple to learn how to control his thoughts. 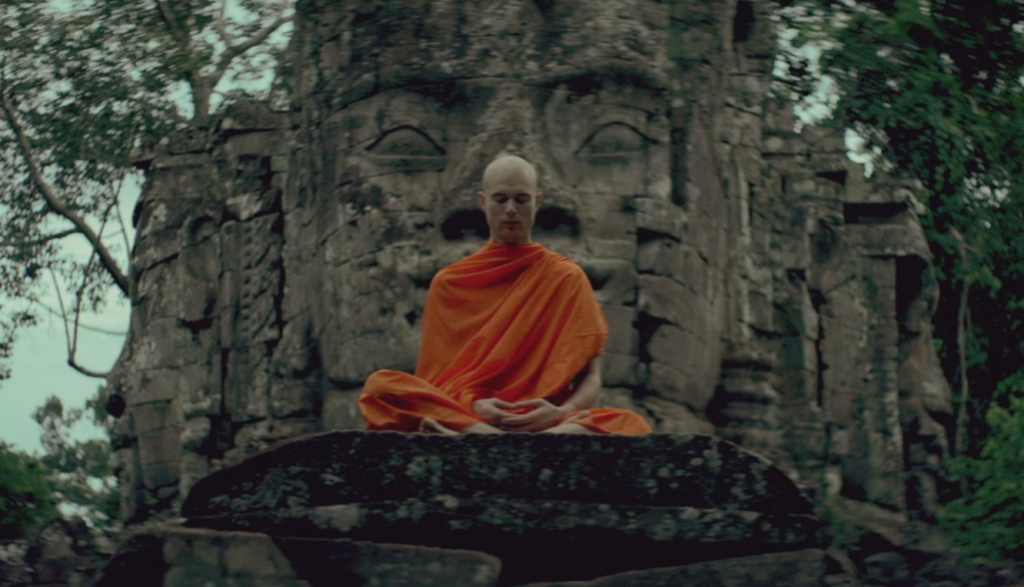 This puts the entire film into a slightly different context. In Buddhism, it is suggested that to achieve true happiness, we must sacrifice all of the things that we deem to be important that are not. This includes material possessions, familial connections, and even our own ambition. Enlightenment can only be achieved when we accept that all of the things that we place value on in this world are in fact valueless. This can be liberating when we realize that the vast majority of things in our lives only have value because we give them value. This allows us to take back control of our lives from the THINGS in our lives. For David, this allows him to find mental calm and control enough to defeat the telepathic surveillance that he faces with his return to the US. This veil of thought, of nothingness, allows him to destroy his creation and save humanity’s free will in his final sacrifice.

Being an independent film, it has many of the drawbacks that one might expect. The film’s cinematography is never distracting, but also doesn’t push any boundaries. The acting is good, but not outstanding. Considering the film’s low budget, they did a fantastic job with locations, however. Everywhere you see in the film, seems passable for what it is supposed to be. The use of lighting in the film to differentiate locations is also very well done. You immediately know where you are based on the kind of lighting that is being used. For instance, the garage is lit with a kind of dirty green light that is fitting for the locale, whereas the government facilities have a sterile white light associated with them. The Red Room, which houses the telepathic surveillance team, is striking against this sterile feel as it is bathed in harsh red light. This gives it a simply sinister feel.

Overall, Listening is a good film. It has a compelling story that carries a human element. Thematically, it feels relevant not only to our own lives but in the broader context of a surveillance state. The telepathic tech is far from original, but in the films use it feels fresh. It isn’t a movie that will leave you wanting for more, but it definitely worth a watch.

Written by Isaac L. Wheeler (Veritas)
Veritas is a cyberpunk and writer who enjoys all aspects of the cyberpunk genre and subculture. He also journeys deeply into the recesses of the dissonance exploring his nihilistic existence. If you'd like to contact Isaac L. Wheeler (Veritas), the founder and editor-in-chief of Neon Dystopia, you can do so here: ilwheeler.founder@neondystopia.com
Previous ArticleHacktivism Records Spotlight: Fresh Sounds, Dead Formats and Dark FuturesNext ArticleOrphan Black Takes Notes From Dark Angel
You May Also Like