Junk Head 1 is an indie short film on youtube that was created largely by just one guy in his spare time. Using stop motion animation, a bit of CGI and a lot of free time, he created a truly unique film. Frankly, to call it bizarre doesn’t even come close to doing it justice, it is a seriously weird film. …But weird in a good way. Let’s look at some examples. First off, the story is deliberately rather vague, it’s really more of showing an experience than telling a story. It takes place in a ‘distant future’ and the earth is unrecognizable, as are the creatures that call this hideous place home. The languages they speak are also intentionally not real languages, showing not just biology but everything about earth and humanity has changed. And change so much so as to be almost unrecognizable.

Indeed, a large part of the plot is about one of the few remaining actual humans going down into the far, far far below depths where sub-humans have bred and dwelt for untold eons just to see what the hell it’s like down there, as we don’t know anymore. And he is rather understandably horrified by what he finds. The use of imagery is quite neat, actually. The unnamed protagonist is the only ‘person’ in the entire film to ever have eyes, or at least eyes that you can see. Many of the bizarre things that have grown over time from their human ancestors don’t have any eyes at all, and the ones that do always wear wrappings or goggles or similar things to hide their eyes.

While I can say this was certainly deliberate, I shan’t speculate as to what message this aspect of the art is trying to convey, really. I think that this is a case of art being best experienced yourself, to see what you take away from it, personally. I’ve spoken to some who found this movie cute in a more grim Tim Burton sort of way, and other people who were deeply disturbed by the imagery. And I suspect that’s part of the point. Takahide Hori is showing us his vision of an extremely distant future, one that we wouldn’t even recognize. …As to why he’s showing us this, I think that question is the whole point. Do you take away from this that, say, over-industrialization is ruining the world? Or do you see more of an us-vs-them about the elite and the masses? There were dozens of possible interpretations I jotted down as I watched, and that’s just from my perspective, albeit trying to see how others might see it. I’m sure you’ll have your own strange feelings about the future he presents.

I personally think that a part of the message he wants to send is something to the effect of ‘there is so much of the world/universe/reality that we don’t have any grasp of yet, and even in a distant future reality is still a confusing and terrifying and bizarre place.’ Big source of this interpretation of mine is the ecosystem of this creepy future. He shows us a world of rampant industrialization, pollution, deliberate genetic manipulation and accidental mutation, and cybernetic technology run rampant. It is, I suspect, an example of what some scientists and writers have warned about: a future in which the cold science of the universe is the only source of morality, and the universe itself is a very uncaring, terrifying demented place, really.

Junk Head 1 elicited some strange emotions from me. It was repulsive, as I’m sure it’s supposed to be, but at the same time, I felt a burning curiosity to see what was around the next corner. This awful polluted revolting concrete and steel sprawling mess was… fascinating. There was always something new to discover, and as bizarre as the ecosystem there was, it made a kind of sense. “Life finds a way” as they say, and bizarre creatures and even ‘humans’ changed to match their surroundings. Living off of pollution itself, becoming a part of the sprawling industrial wasteland, like any other ecosystem we see on earth already. Just one that is a lot more nightmare fuel.

I won’t spoil the plot, you really should go see it. It’s definitely worth it. Junk Head 1 was a passion project of one crazy creative mind and deserves the half hour of your time to see it. It is in fact (according to the creator) only one part of a much bigger story, and I believe it, given how it currently ends. He is working on getting a team together to make a proper series or full-length movie out of it, and I wish him the best. I for one as both a movie lover and sci-fi writer myself was really engaged and thoroughly enjoyed myself, and can’t wait to see what happens next. So, I highly recommend you take a few minutes, turn off the lights, put in headphones, and experience this strange creepy and curiously enthralling vision of the future. Enjoy!

If you should happen to read this, Takahide Hori, I really look forward to seeing what you bring us next. As a scifi fan and creator, I really liked it! As have everyone I’ve shown this too. I hope you can get the recognition you deserve. Ganbatte ne! 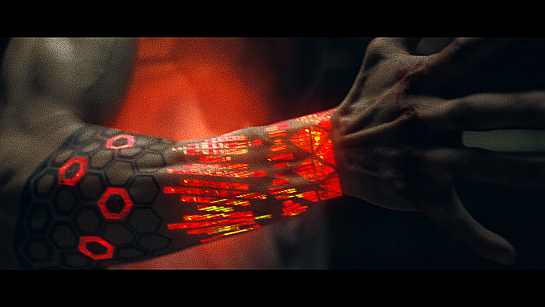