In the mid 90’s some of us in England were privy to the late night happenings of Channel 4, one of the (then) 4 main broadcasters on terrestrial television. If you stayed awake long enough on a weekend night you’d be able to catch some rather fantastic anime. It was a well-kept secret, only uttered in hushed tones in the school playgrounds, where VHS and Warhammer models were the currency of the day. We tended not to tell those outside of our social circles because they’d never understand. Cartoons? But for adults? Never. It felt good to know we held something over the norms. That we had secrets they’d never know. 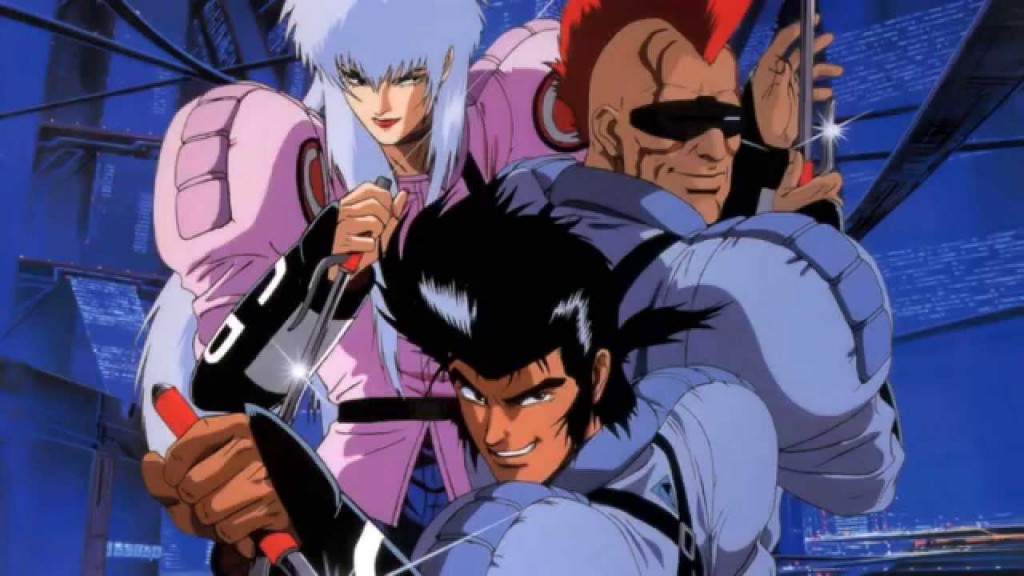 It was one such late night that I discovered Cyber City Oedo 808, a 3-part OVA produced by Madhouse from 1990-91. It ticked so many of the important boxes in my developing teenage mind. I’d been living on a steady diet of Neuromancer, Cyberpunk 2020 and galloping punk rock, so you might imagine my shock when I discovered a show that incorporated all of those elements. Sure, the rock might not be punk, but Gogol’s mohawk certainly was, and the hyperviolence and near-constant use of profanity certainly helped too. You could say I fell in love.

Set in the aforementioned city of Oedo, unsurprisingly in the year 2808, it tells the story of three prolific cyber-criminals who are granted a unique opportunity – to work for the police in a bid to reduce their sentences. Focused on Sengoku, a wise-ass with a quiff, the previously mentioned mohawked hacker (and beefcake), Gogol, and the cool yet moody bishonen, Benten, each episode places one member in the spotlight with the others supporting.

After escaping lockdown in an orbital penitentiary and returning to earth, our protagonists are fitted with explosive collars and tasked to undertake dangerous duty in their areas of expertise. Should they try and escape or fail to complete their mission the collars will be detonated. Oedo is no pleasant place, in fact, it’s pretty brutal. It’s perpetually nighttime in the high-tech city, the streets are dark and foreboding. The protagonists’ own police chief is so morally grey that he uses the threat of detonating their collars against them, and he isn’t joking. It’s a world where society is out of control. The fact our three protagonists are career criminals with sentences of over 300 years a piece is testament to that.

The three episodes are weaved with classic cyberpunk elements, but bolstered with hefty doses of horror and hints of otherworldliness. Unlike a lot of classic cyberpunk media, action is clearly the order of the day. The violence is thick and frequent. There is bloodshed and death and our antiheroes appear capable of the sort of madness normally reserved for low-level superheroes. Faces do get smashed. Heads do explode. Expletives are spat at an unprecedented rate. 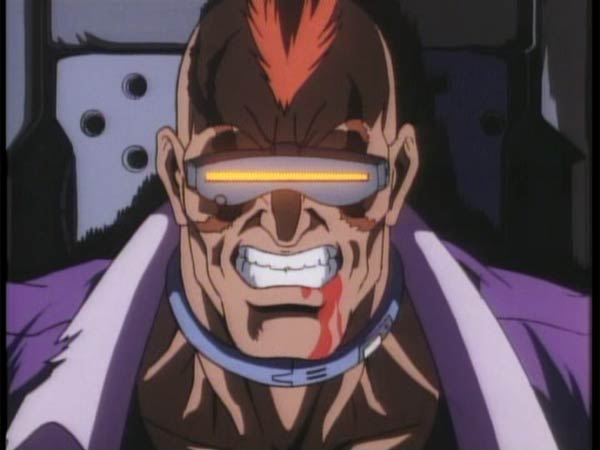 ‘Virtual Death’ focuses on Sengoku’s attempts to save hostages trapped in a massive skyscraper, where the centralised computer has been overtaken by someone who may just be dead. Gogol’s ‘Psychic Trooper’ involves precisely what it says on the tin, as he’s pitted against an experimental cyborg from the military. ‘Blood Lust’, perhaps the oddest of the bunch, sees Benten mixed up with space vampires. Yes, you did read that correctly. No, it’s not as bad as it sounds.

It may come as no surprise that each 45-minute episode is packed with genre tropes, but they are for the most part delivered without shame. What’s more, it also works, a definite charm worn like a blood-splattered badge of honour on Oedo’s chest. It is, however, unfortunate that women appear to be lacking in this grim future. Characters like police colleague, Okyo, are drastically underplayed despite their potential, and the bad-ass female criminals are, as you might expect, sexy, sassy and very one dimensional. That said, the very feminine Benten provides an interesting counterpoint to the hyper-masculinity on offer, particularly as he is not played for laughs. But then again it’s the dark future. There are no laughs to be had. 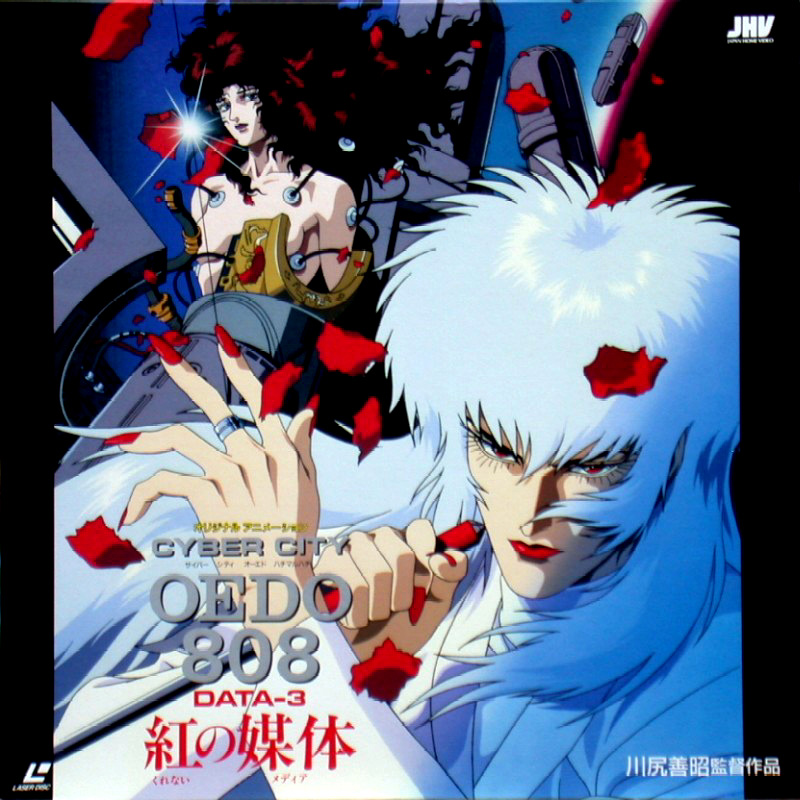 Quite unexpectedly for anime of this era, the English voice acting is very good. Protagonists’ lines are delivered with grit and nuance, with Sean Barrett (Gogol) being a particular stand out. There are also a couple of different versions of the soundtrack, although the less said about the original Japanese version the better. For the UK release an entirely different score was composed by Rory McFarlane, way heavier on the rock, electronics, and metal. It’s far more cohesive and in line with the content of the OVA and is very, very cyberpunk. Plus it’s fucking brilliant, with a theme you will find yourself remembering time and again. Unfortunately, the UK version has now been lost to the ether due to the loss of rights. Sigh.

It’s a shame that just as we get to know the characters things come to an abrupt end, and this is perhaps Oedo’s biggest downfall. In a setting ripe for the picking, we’re treated to just three episodes. There is so much to tell. So much to ask. Yet we get no more. Beyond a Japanese released graphic adventure for the PC, Oedo ceased to be. All these years later you can still hear, should you listen close enough, hushed voices talking of how much they loved the show. Should it ever be rebooted it would need to be handled with plenty of care. It’s a relic now. A nod to a speculative future that was stuck firmly in the late 80’s. Stripping the characters of their context and updating them for a modern audience would require a lot of skill. Still, we’re lucky in that we have these original episodes.

If you are a fan of classic 80’s and 90’s cyberpunk anime such as Akira, Appleseed and Bubblegum Crisis, then you’d do well to give Cyber City Oedo 808 a shot.