Dead Leaves came out back in 2004, but I had never heard of it until recently. It’s a one-off anime movie, that is chaotic, offensive, and overly sexual which is probably why it never rose to any great acclaim. Although, I think all of these things manifest as strengths within the context of Dead Leaves. 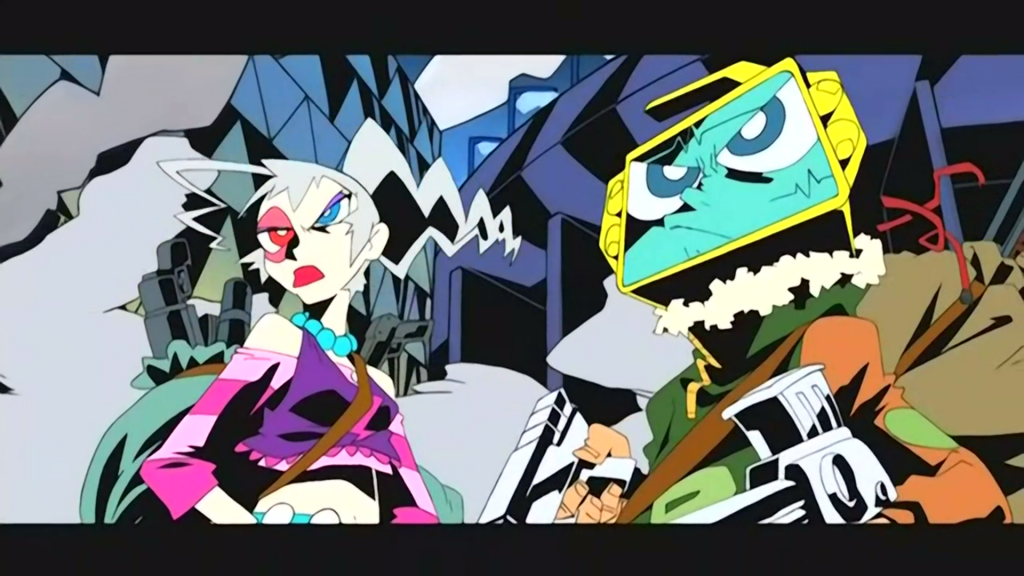 The movie stars Pandy, named for her panda patched eyes, and Retro, named for his retro styled tv head. They wake up together naked and with amnesia just outside a city. They go on a rampage in the city with  people who share the same dead face. Soon, they are arrested by dead faced police officers and sent to a prison, the titular Dead Leaves, on the moon. They face humiliation at the hands of the guards and begin to form relationships with the prison’s other unique inmates. Alone in their cell together, Pandy and Retro have amazing bizarre sex and this allows them to escape from their bonds and then begin a full-scale prison break. During this prison break, Pandy and Retro begin to uncover the truth behind who they are and the genetic experiments that are being performed at Dead Leaves. 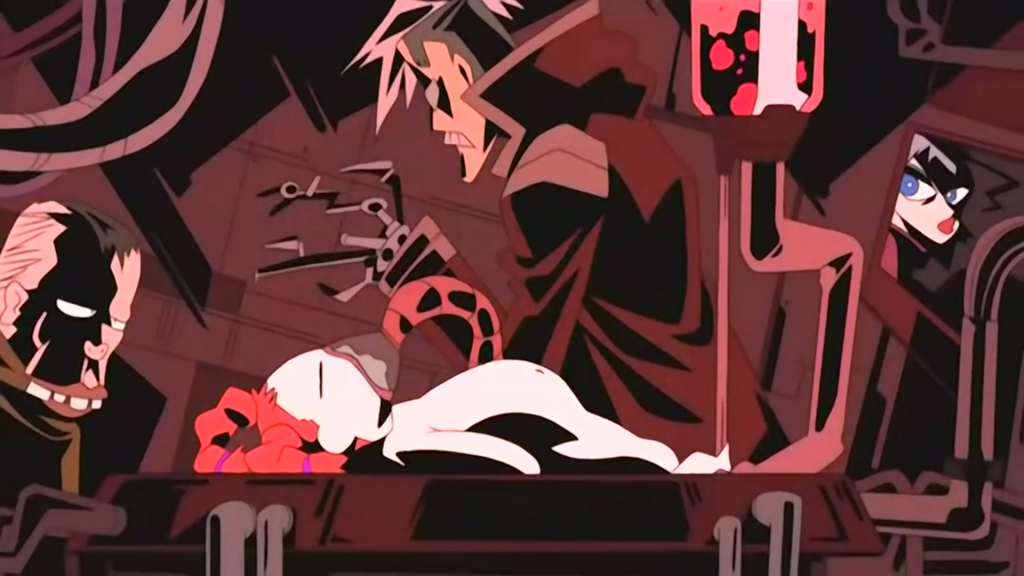 The action and plot development in Dead Leaves moves at chaotic breakneck speeds but still manages to tell a cohesive story. Between bouts of violence and sex, pieces of the story are dropped concisely as to not take away from the pace. The sexuality that runs rampant through the film is blatant and unfiltered, but because of how it is presented doesnt break down into feeling over perverted. There are moments that take exception to this, but this might be due more to my own personal sexual hang-ups than to do with the movie. Be prepared to have those limits tested. An obscure reference that the film makes is to Tetsuo the Ironman, which will be familiar to many cyberpunk fans. Tetsuo however, also tests your sexual limits with a particular scene where Tetsuo grows a drill for a penis, then proceeds to have very murdery, bloody sex with his girlfriend. One of the other inmates has this drill penis, and it is a constant source of commentary. It was really nice to see Pandy presented as sexually active, aware, and present without being a slut. 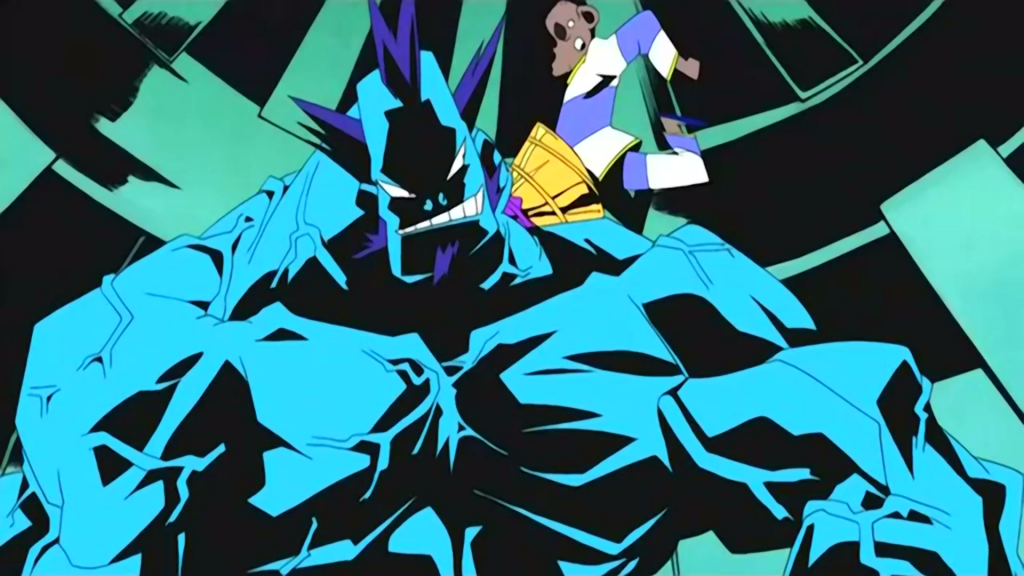 Another dynamic in the film is how deviancy is treated in the film. On Earth, and again in the prison in the form of guards, humanity is presented as so conforming that they might as well be a single individual. This manifests in the fact that none of these characters have any merit in the film at all, even in facial expression. Male or female, they are the same. Complete uniformity. The residents at Dead Leaves prison on the other hand are dynamic, interesting, unique characters. Thier deviancy defines them, and this in turn makes a commentary on us, as a society. What makes us interesting is how we deviate from the norm, not how we conform to it. 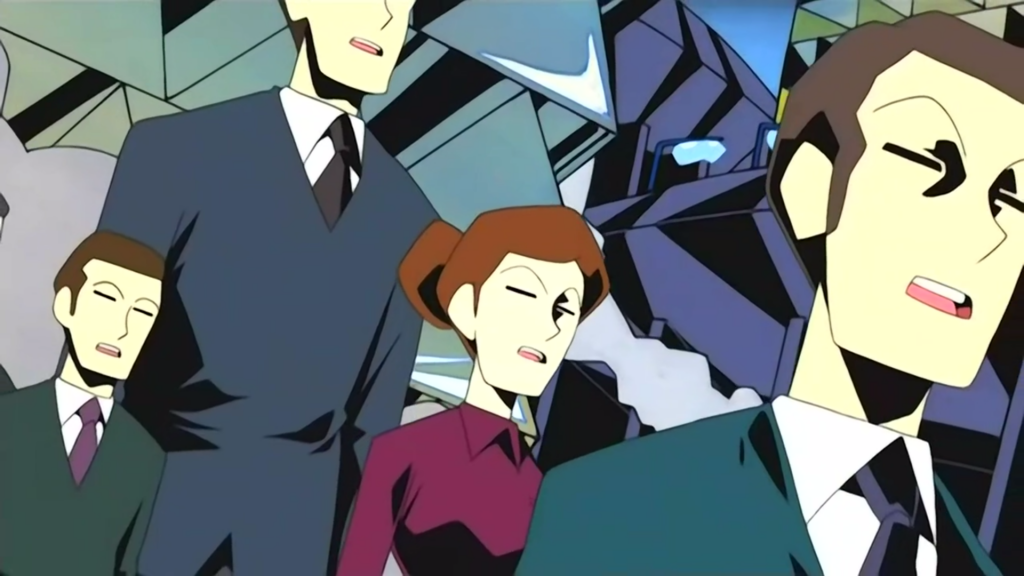 Dead Leaves is facinating because it pushs the limits. Being an anime developed in Japan where conformity is highly encouraged really makes it shine in context where it praises individuality, even in sexual deviancy. I would recommend Dead Leaves to anyone who isn’t easily offended.

Written by Isaac L. Wheeler (Veritas)
Veritas is a cyberpunk and writer who enjoys all aspects of the cyberpunk genre and subculture. He also journeys deeply into the recesses of the dissonance exploring his nihilistic existence. If you'd like to contact Isaac L. Wheeler (Veritas), the founder and editor-in-chief of Neon Dystopia, you can do so here: ilwheeler.founder@neondystopia.com
Previous ArticleReTech – Cyberpunk Reclamation ArtNext ArticleOn Virtual Reality, Digital Life and the Need for Ethical Codes of Conduct
You May Also Like

Power Glove Ultra, The Street Finds It’s Own Use For Things
June 22, 2016
2 Comments