Punk kids are going around town plastering every naked wall with posters of Geronimo, even making use of the pipe system used to deliver scripts to Luis Ortega, our pirate broadcaster who’s been shutdown by the DHS, to hasten delivery. Of course in a security-rich future they’re stopped and interrogated, which makes Snyder even more upset when it’s clear these kids aren’t giving up the real Geronimo. Missing from this display of rebellion is Bram, who takes advantage of absentee parents to go traipsing about an abandoned downtown LA. The people may be gone but everything is still standing.
Word spreads that Phyllis has been killed and her home tagged in honor of the resistance leader. Katie confronts Broussard about her info being used for targeted assassination, but it’s not enough to keep her from lying to her husband some more and gearing up for an attack on Governor Snyder after he publicly executed Luis to convince the colony that he had stopped the insurgent leader. Will doesn’t agree with any of it, but his eyes are on the prize–finding his son–even if Snyder has put him in Phyllis’ position and refuses to help reunite his family until the resistance is quelled. 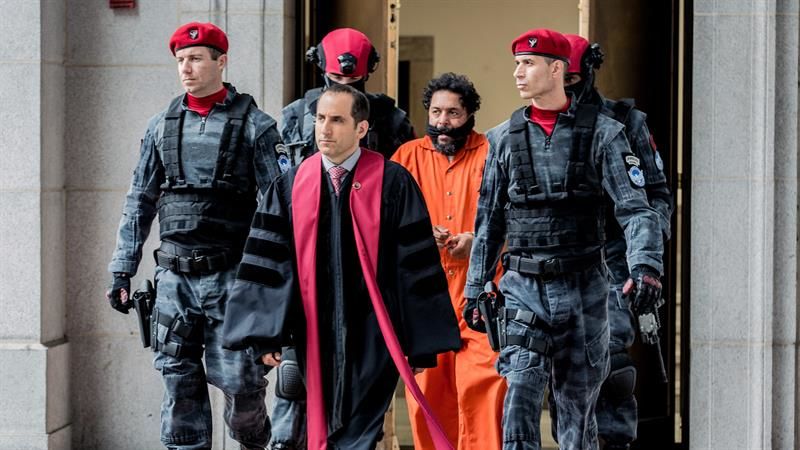 After last week’s cat-and-mouse games I was ready for some more surreptitious shadow fighting between collaborators and and resistors, more spy-versus-rebel chess moves. What Colony actually gave us was a bunch of clean up from the last episode. DHS cleans the streets, Snyder cleans house, the resistance reins its people in. A whole lot of build up to something coming, but not a whole lot here. Unless you’re interested in seeing just how blinded a man can be when it comes to the woman he loves, then there’s something here for you. I mean, forget Will being a fed and a ranger–Katie should’ve been an actual spy with how well she lies to her husband’s face. It’s a real talent.
What I wasn’t expecting, and was glad to see, was how much of a schlub Snyder turned out to be. Until this point he’s been shown as the big man in what’s left of LA, but it turns out he’s not even middle management. The guy’s a shift supervisor doing anything and everything he can to win favor with the “hosts.” That makes him both desperate and dangerous. The sleaze is turned up high before he makes a deal with Luis Ortega–his confession to being Geronimo in exchange for relocation to a different colony–and it’s easy to believe that he’ll go through with it since it wasn’t the first deal he’d extended that day. But Snyder had fed the people red meat in the form of a guilty man purportedly responsible for killing civilians, and nothing was going to keep him from giving them a body and improving his image in the face of his superiors.
Now that the resistance is literally gunning for him, we’ll have to see just how much that false confession was worth.