Has there been a day since the advent of social media where any of us have been able to get online without encountering someone’s outrage? Or, more correctly, have we ever been able to avoid the collective outrage of groups of people chiming in on trending topics just to make sure that their contribution to a conversation gone out of control is noted? I can’t think of one, and I’m guessing many of you are struggling with recalling such a time as well. It’s probably because the outrage that pushes so many to scream so much about the latest salacious topic passed around social media compels us to put forth the worst we have to offer, and Black Mirror shows us how that can manifest in the physical reality beyond our smartphones. 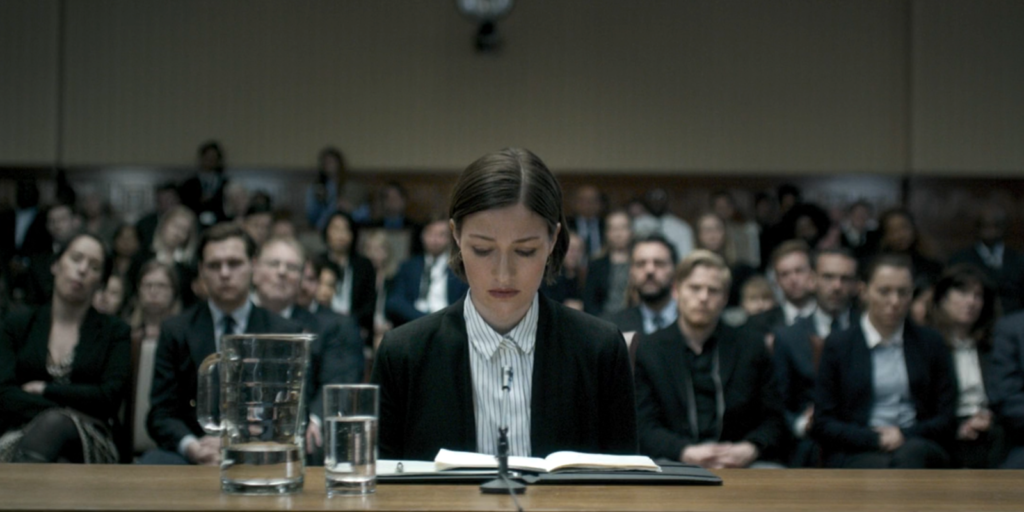 DCI Karin Parke (Kelly Macdonald), along with her tech-head partner Blue, is assigned to the murder of conservative pundit Jo Powers. After penning a scathing critique of a disabled activist who’d committed suicide to protest cuts to disability benefits, Powers attracted a long list of potential attackers who could’ve slit her throat and silenced her for good. While Karin questions Powers’ husband, who claims his wife slit her throat in a fit of rage, Tusk, an American rapper, is the latest public figure to be attacked on social media for criticizing a young fan. Attached #DeathTo, millions call for Tusk to apologize or leave the UK. After collapsing in a spastic episode, he’s rushed to the hospital and placed in an MRI. When the machine is run an ADI (Autonomous Drone Insect) is magnetically yanked out of his skull, killing him. It’s a link to Jo Powers, now that they’ve found an ADI at the scene of her death as well.

Karin and Blue go off to question Granular, the mega corporation that, in cooperation with the UK government, designed the small drones to replace the near-extinct bee population. Their investigation into the possibility of rogue ADIs killing people is hampered by Agent Shaun Li of the National Crime Agency over fears that they may infringe on his own inquiry. An inter-agency fight seems imminent, but another #DeathTo victim has been identified, a young woman who posed for inappropriate selfies at a war memorial. Karin and Li find her in an undisclosed safe house, yet ADIs swarm the location and kill the #DeathTo target. Karin and Blue are certain now the ADIs are deliberately targeting social media pariahs, and they learn from Granular that they’re able to do so thanks to a backdoor the government has access to, giving them a surveillance system in every drone. This is also how their killer is able to find his victims.

#DeathTo has developed into a “Most Hated” list, allowing social media to rank UK public figures they loathe the most. Naturally, a high-ranking government official finds himself at the top of the list, putting pressure on Li and Karin to find the person behind the ADI hacks. Li and the government scheme on how to destroy ADI hives and stop the drones from killing, but Karin chooses to stick to interviews of former Granular employees. Sitting down with Tess Wallander, Karin listens to another social media campaign of outrage after Tess chose to publicly out a lewd man on the tube who turned out to be developmentally disabled. And in the aftermath of being swallowed by the whole of the internet, Garrett Scholes, a former Granular programmer and friend was there to pick up the pieces.  After finding Scholes’ hideout and hard drives, Blue and Granular think they’ve got the ADI problem fixed and can keep any target from dying. But as they resume control the ADIs are triggered, and each of the 387,036 people who’d shared #DeathTo are killed by the autonomous insects.

With all the things we consume and contribute to online, it’s curious that one of the things we love more than anything is the ability to hate. Whether collectively or independently, nothing motivates people to get into a discussion like a reason to hate the topic or the person presenting it. For that we have our own versions of Jo Powers we can pluck out of the public consciousness. Those in the UK have Katie Hopkins, a woman who gladly calls herself the “biggest bitch in Britain”; stateside we’ve got Ann Coulter, a woman so brave she’s never let facts stop her from promoting ignorance on a foundation of bigoted barbs; all over the world people have been watching Rush Limbaugh pull off his best impressions of the disabled. You get it. These provocateurs exist by the dozens, wherever a keyboard or camera are available, and are able to reach their audiences no matter what rock they hide under, and they excel at drawing the ire of the masses to rise to a position of comfortable infamy. They’re in the business of stirring shit up because it makes great business to have a dedicated following of people who hate them inadvertently spreading their work and supporters who are indignant that anyone would challenge the offensive things they say. It’s no wonder so many people enjoyed watching Ann Coulter get torn to shreds over the better part of two hours before a live audience. Who could be more deserving than someone who sold more than a quarter of a million books while denigrating the families people who’ve died in terrorist attacks?

Though the comments fired at these pro provocateurs are done so with some personal investment from followers who are incensed at the thought of their continued existence, nearly every media outlet engages in cultivating outrage. Pick a site you follow, doesn’t matter the central focus, and at some point in the week, if not daily, you’re likely to find a post meant to voice the writer’s outrage over something or invite followers to voice their own. It’s good for clicks because everyone knows outrage porn is surprisingly addictive. With a story that directs anger at a person or event can get a mob to connect and publicly whip the villain. It then gets supplemented on cable news, as seasoned talking heads take that outrage and stretch it out for the 24-hour format, making sure to keep public indignant until the next scandal is ready for consumption. Granted, many have observed this practice take more control with every passing year, creating a bland, colorless world where people descend into tribalism of the new age, siding with those who only share their ideologies and use opposing point of views as a means for identifying enemies, giving us thick borders that separate people into camps of sameness. But the outrage porn industry is funded by our consumption, and we’re so addicted we’ll find our fix no matter where it is.

Being no big fan of social media, I must confess that I have an odd fascination in witnessing infighting among ideological tribes. It’s almost like watching nature unfold to see a celebrity torn asunder by fans their because they’re expressed an opinion that is out of step with the rest of the group. But with such social clout and visibility it’s easy for them to recover. Things get different when that outrage is lowered to regular people. Like Clara Meades we’ve had more than a few teenagers become social media targets for taking selfies in inappropriate locations, inviting thousands to bare down on someone who can’t process the influx of attention raining down on them, not to mention all the hate and threats. Black Mirror’s “White Bear” was the first in the series to examine that alienation through a woman who may or may not have done something wrong, and is forced to run and hide from people hunting her because of it. At the same time, hundreds gather to gawk and stare, feeling satisfied at the sight of her dread. It’s the same combination of behaviors and feelings that led the hundreds of thousands in “Most Hated” to wish death upon others until it came for them. Makes you think there’s something particularly off about the people populating those stories, and perhaps makes you want to blame those around us that informed their creation. Or maybe the social constructs we’ve adopted that allows this outrage to fester. Personally, I blame the human brain.

In our state of always-and-everywhere media there is no respite from offensive goings-on in governments, corporations and from famous people. We’re all always aware, always reminded to be aware of everything, and this narcotizing dysfunction taxes the amygdala to the point of atrophy, making it hard to discern what deserves our attention. Refugees dying in the Mediterranean while fleeing war; nepotism causing gridlock in the legislative process; corporations and governments working together to spy on an entire nation, escape the wrath of our collective outrage because those issues become too cumbersome to navigate, too complex to channel outrage. Instead, what little indignation we can muster is pointed towards those who fail to properly cast our favorite anime characters in live action movies because it better facilitates our addiction to outrage. While at the same time these exchanges tend to draw out the worst we have to offer the world, leaving those who join up with their tribes to go out and hunt look just as bad as their targets if not worse.

Like “White Bear”, “Hated in Nation” isn’t a prescriptive episode. From the outset of the episode people have chosen their outrage over the comments of a pundit who needs their negative attention to sustain her career and ignore serious problems like the extinction of the Siberian crane and the common bee. At the end, outrage wins out over people examining the nuances of the case that led to the deaths of thousands. We’re very much in a same state; enough of us are too fixed in our outrage loop to break free and it’s changing what civil discourse is like. For anyone paying attention to US news for the past year, it’s like our election cycle is a Twitter fight come to life.

So, what’s the remedy for avoiding blanket outrage and seeking discourse with substance and nuance? Perhaps one has to walk like Karin has, rhetorically rejecting the changes media has inflicted upon society while existing in the fringes of the future. The outrage is going to continue with or without your participation because it’s how we process current events now. The only way to rise above is to opt out.

Written by Daniel Rodriguez
Daniel Rodriguez is a freelance writer and author from New York City.
Previous ArticleBlack Mirror on the Past, Present, and Future of WarNext ArticleLast Week in Cyberpunk 11/4/16
You May Also Like