At first glance Ridley Scott’s Alien, from 1979, is easy to dismiss from discussions about cyberpunk. When perceived as a movie about an alien stalking the crew of a spaceship, I can understand the hesitance. However, Alien is about so much more than the titular Alien. It is in fact, very cyberpunk in visual style and themes as well being relevant to the genre historically. 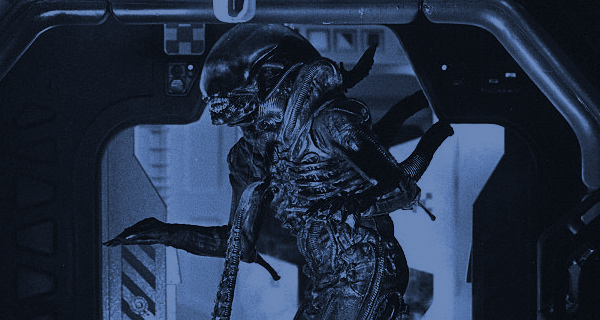 The crew of the spaceship Nostromo, an ore hauler, wake to find that their ship has been diverted from its course to investigate a distress signal of alien origin. Responding according to company guidelines, they discover a derelict alien vessel that has a distinct biomechanical aesthetic. While investigating the ship, they disturb an egg that releases an alien parasite that attaches itself to one of the members of the crew. Against Ripley’s (the protagonist) protest, the alien is brought on board the Nostromo resulting in the alien progressing through its life cycle, until it is a lethal creature hunting the crew. We learn that “The Company” (Weyland-Yutani) sent the Nostromo to extract the creature and bring it back to Earth for study through the agency of the ship’s AI, Mother, and the android Ash. Ultimately, Ripley manages to defeat the creature, prevent it from falling into The Company’s hands and survives.

Despite the Xenomorph’s (the name was retroactively given to the creature) obvious importance to the story, it has very little screen time. The vast majority of the story focuses on the crew of the Nostromo being manipulated by The Company’s (a megacorporation) agents into attempting to capture an alien specimen with no regard to whether the crew survives. Even before the crew learns about the distress signal that has awoken them, it becomes apparent that the system that they operate under is designed to exploit the workers. Many of the crew’s members feel that they are not getting a fair share of the profits from the ore they are hauling, and their contracts are repeatedly mentioned to include clauses that will force them to forfeit their “shares” if they fail to do what is in the company’s best interest (read profit). Mother is the artificial intelligence onboard the Nostromo that acts as the will of The Company in the absence of a representative being onboard. Mother is the one responsible for bringing the crew out of hypersleep to investigate the alien signal in the first place and for instructing Ash (the android) that the crew is expendable. Ash in turn (they don’t know he is an android) manipulates events to force them to investigate the signal against protests, brings the alien on board, lets it free aboard the ship, and tries to kill Ripley when she discovers The Company’s intentions. It is these very cyberpunk manipulations that capitalize the film’s screen time.

Ellen Ripley, the protagonist of Alien, is a fantastic example of a cyberpunk heroine. She is an everyman blue collar worker, working in the skilled profession of space hauling. She is technically savvy, does not allow her emotions to override her logic, and isn’t afraid to challenge the system when The Company’s agenda threatens all of humanity. Ripley is the only character in the film which makes decisions based on her reason, which makes us confident in her competence as a hero. That is just good writing on the part of Dan O’Bannon. Even when she is face to face with the Xenomorph, she is trying to figure out how to defeat it, not giving into her fear. As the character continues to evolve throughout the rest of the franchise, these character traits are only cemented further. 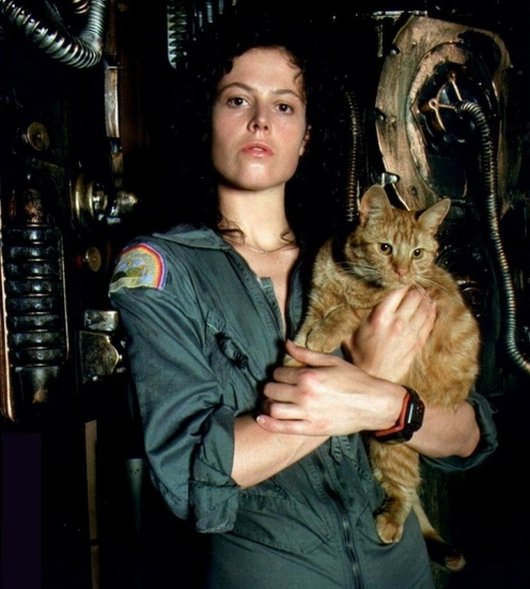 Alien‘s production value is incredible. Most of the acting in the film achieves precisely what it sets out to accomplish, especially when delivered by Sigourney Weaver (Ripley) or Ian Holm (Ash). The model for the Nostromo is heavily influenced by industrial aesthetics, which hammers home the idea that these are blue collar workers. The interior sets for the Nostromo continue to illustrate that these are ordinary people working real jobs. There is an electronic hum nearly ever present. Readouts are constantly giving us updates on the status of this colossal ship. The sets are gritty and atmospheric, giving us the sense that this ship is lived in, aged, and not pleasant. The lack of available CG at the time required that they build the set entirely with practical effects. Every detail on a computer screen was actually on a screen, every spec of dirt was put there, and the alien itself was handcrafted. The design for the derelict alien ship and the Xenomorph were the product of H.R. Giger. Giger was best known before Alien for his fusion of organic, often overtly sexual in nature, with mechanical appearance. Giger actually hand painted the entire set for the derelict alien vessel. In addition to the magnificent sets and excellent acting, the soundtrack supplied by Jerry Goldsmith brought further suspenseful, horrific atmosphere to every portion of the film.

From a historical perspective, Alien is also fascinating within the genre of cyberpunk. Dan O’Bannon, the writer, and creator of the Alien franchise had previously worked with H.R. Giger and Chris Foss on the unrealized film Jodorowsky’s Dune. During his time working on that project, in 1975, four years before his work on Alien, O’Bannon collaborated with Jean “Mobius” Giraud to write the comic, The Long Tomorrow.  This comic was important in cyberpunk history because it would go on to be an inspiration for William Gibson’s (Gibson also wrote a script for Alien 3 that was rejected) conception of the Sprawl, and the primary visual reference for Ridley Scott’s Blade Runner in 1982. Giraud even did a piece of concept art for Alien. Alien‘s aesthetics, particularly in respect to grittiness, would reprise in Blade Runner. Ian Holm would go to act in the Fifth Element, which was heavily inspired by The Long Tomorrow, as well, and other works by Jodorowsky and Giraud. Sigourney Weaver has been in more recent cyberpunk films too, such as Chappie (which may have inspired Blomkamp’s interest in doing Alien 5 and having Weaver reprise the role of Ripley). O’Bannon would also go to adapt another work from Phillip K. Dick for film, called Second Variety, into Screamers (which starred Peter Weller aka Robocop). James Cameron of Terminator fame, as well as the creator of the excellent cyberpunk series Dark Angel, wrote and directed the sequel to Alien, Aliens, which maintained many of the qualities present in Alien. 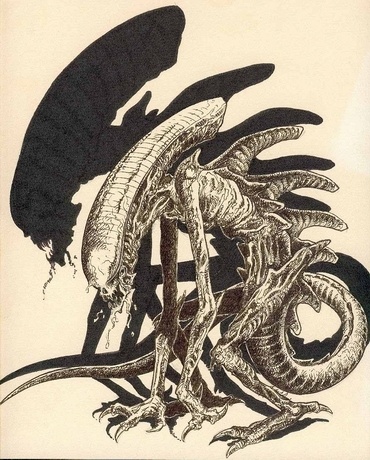 Jean “Mobius” Giraud’s concept sketch for the Xenomorph in Alien.

There a couple less salient aspects of the Alien franchise that also help nudge into general acceptance as a cyberpunk film. The first is that it may take place in the same universe as Blade Runner. We laid out the evidence for that theory in a previous article. Ridley Scott also commented after the release of Alien that the Xenomorph may have been a genetically engineered weapon created by the Space Jockey’s (now known as The Engineers since Prometheus). Prometheus with the introduction of the Engineers into Alien canon has added credence to this theory. Due to being designed by the same mind (Giger), the Xenomorph and derelict ship share stylistic components, most notably their bio-mechanical appearance. From an in-universe perspective, this also adds credence to the idea that they share an origin in the Engineers. The idea of a genetically engineered biomechanical weapon is a very cyberpunk concept.

Alien is part of the Cyberpunk Zeitgeist

Cyberpunk didn’t pop into existence out of Neuromancer‘s pages. It was the result of the same anxieties that created the punk movement and the media that was produced during the period of the 70s, 80s, and even today. Those anxieties persist. Alien’s visual style would go on to inspire cyberpunk aesthetics, even beyond Blade Runner. The people who created the movie would go on to influence more films that are indisputably cyberpunk. But despite all of that, the movie is thematically a cyberpunk story. Alien is a cyberpunk film.

If you’d like to experience (or re-experience) Alien you can find a copy here.

Written by Isaac L. Wheeler (Veritas)
Veritas is a cyberpunk and writer who enjoys all aspects of the cyberpunk genre and subculture. He also journeys deeply into the recesses of the dissonance exploring his nihilistic existence. If you'd like to contact Isaac L. Wheeler (Veritas), the founder and editor-in-chief of Neon Dystopia, you can do so here: ilwheeler.founder@neondystopia.com
Previous ArticleLast Week in CyberpunkNext ArticleBiopunk IS Cyberpunk
You May Also Like