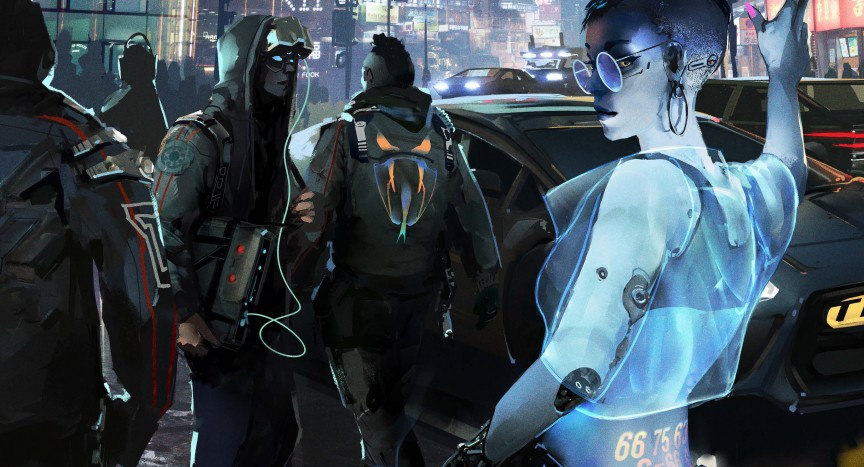 I recently had a chance to play an introductory scenario from the Cyberpunk Red Jumpstart Kit—a preview pack for the upcoming new edition of the classic Cyberpunk role-playing game. After slipping on our mirrorshades and breaking open a case of Smash, three of us huddled around the table as our gamemaster—none other than Neon Dystopia’s own Veritas—spread the stack of pre-generated characters in front of us.

The production values were great and presentation was attractive, such that I found myself gravitating towards certain characters based on their portraits as much as their archetypes. Being a singer in a few bands, the Rockerboy (-girl, in this case) was of course near the top of my list, but when she was scooped up by another player, I turned my attention to the mohawk- and trenchcoat-sporting Fixer, Grease. Yet after seeing that my fellow players had selected characters that were a little light on combat skills I settled on playing Racer, the Nomad, a character archetype that takes much of its inspiration from Mad Max. With a little bit of guidance from Cyberpunk’s trademark Lifepath system, she became a foul-mouthed, hard-drinking Texan girl on a vengeance-fueled road trip that had led her to Cyberpunk’s default setting of Night City. As someone familiar with the 2013 and 2020 editions of the game, I was eager to see what had changed in thirty years as I pored over her character sheet.

As it turns out, not much.

The basic mechanic of attribute value plus skill value plus die roll is essentially unchanged, but that was to be expected. What disappointed me was how much of the rest of the systems likewise remained crystalized.

Perhaps I should back up for a moment.

I loved Cyberpunk 2020. As far as tabletop cyberpunk (lower-case ‘c’) RPGs went, Shadowrun caught my eye first and remained my favorite for years, but where the Sixth World seemed to feel a need to play things straight and deadpan in order to compensate for what could be perceived as the inherent goofiness of overlaying Tolkien-esque fantasy on top of sci-fi, Cyberpunk 2020 felt no such compunction. For all of its posturing at being deadly and gritty, it was a world of gleeful, over-the-top, and even cartoonish extremes. A world where your character’s trip to the Afterlife nightclub in search of a partner with which to test drive his new Mr. Studd(tm) implant could find him jumped in an alley by a spitting image of JFK from the Kennedys posergang wielding a Husqvarna ChainRipp(R) retractable chainsaw from his mirror-plated cyberarm. The game had atmosphere in spades and wasn’t afraid to use it.

Yet, upon revisiting the 2020 version of the game in more recent years, I found that the mechanics hadn’t aged well. In fact, my more modern palate found the system nigh-unplayable without at least a handful of house-rules. Mike Pondsmith is a giant in his field, and he and the folks at R. Talsorian made a game that was seminal in the gaming world and frighteningly prescient of our real one, but I think that the strengths of the game and its designers lay in world-building and broader concepts like the Lifepath system, rather than the real nuts and bolts of how to resolve a firefight.

Sure, I get that part of their point was that real violence is random and deadly, and if you live the life of the average Cyberpunk character, you had better learn to pick your battles and grow eyes in the back of your head right quick or else you’ll become worm-food—but dealing out death and dismemberment (and it was frighteningly easy to lose a limb) so casually that player characters live in crippling states of paranoia doesn’t necessarily lend itself toward a fun game or interesting story. Therefore, my hope was that Pondsmith and company might have taken a few cues from the past thirty years of innovation and experimentation in tabletop RPG design. Unfortunately, what the Cyberpunk Red Jumpstart Kit hints at is something slavishly devoted to its source material—to the point that much of the rules, examples, and sidebars of flavor-text (including a classic typo) are directly copy-pasted from the old 2020 rulebook.

To elaborate a bit, one of my personal peeves is how a rapidly escalating competition between damage and armor is largely unchanged from the older editions. What this effectively means is that light firearms, fisticuffs, and many melee weapons (except for that ChainRipp(R)) are still essentially obsolete out of the starting gate since high-caliber weapons and heavy armor are so readily available at character generation. At this higher end of the damage versus armor scale, the range of probability associated with of a fistful of dice can get really “swingy” and the line between being an unstoppable juggernaut and a thin red paste on the pavement is often a fine one—which is again what I think the game designers were going for, but it only works if everyone agrees to play the game on the same level. In some ways these details reinforce the game’s themes of extremes and embracing technology at every turn (why use a switchblade when you can pop claws like Wolverine?), but I also think they can ironically fly in the face of the gritty, street-level scarcity implied by the narrative.

To be fair, it is a far more playable game than the old 2020 edition. Active defense rolls against firearms and a more generous injury track make combat a little less immediately terminal. None of our players chose the Netrunner role, so we didn’t get to explore that aspect of the game, but the Jumpstart rules promise a streamlined process where Netrunners can no longer be “the man in the van” and must perform their hacking on-site alongside their companions due to a shattering and restructuring of the Net’s infrastructure. Skills are fewer and more general, which I hope will allow characters to branch out from their starting roles more easily. Role-specific special abilities will be returning but were not included in the Jumpstart Kit (with the exception of the Netrunner’s Interface ability) for the sake of simplicity, so the only comment I can currently make is that I hope they are considerably overhauled and play-balanced against each other compared to their 2020 versions.

As I touched on already, the Lifepath step of character generation was an essential part of the old 2020 game and it still plays an important part in the Time of the Red. For the uninitiated, Cyberpunk’s Lifepath is a series of tables that players roll on or pick from to determine what makes their characters tick—from background and upbringing, to personality and motivations, to the cast of friends, enemies, and romantic entanglements they may have accumulated. Some gamers might find this method of fleshing out character background to be too chaotic or a bit of a straightjacket, but I’ve always found that—sometimes with a few judicious re-rolls—the random tables actually start to string together a cohesive narrative that serves as a springboard for my own imagination and allows my characters to hit the ground running in pleasantly surprising directions. Like many things in the Jumpstart Kit, the Lifepath step exists in a stripped-down version, but it was still enough to take the gallery of portraits and pre-generated strings of numbers and begin to transform them into our own, personalized characters.

As to how it all played out for our group, there are multiple scenarios included in the Jumpstart Kit and our GM chose one centered around the players being tenants of the same apartment building located near the city’s Combat Zone (pretty much like it sounds.) The scenario called for one player character to actually be the owner of the building, and even in that decision the results of our Lifepath rolls immediately influenced and evolved the narrative as we concluded that the group’s Tech was the most likely choice of owner—his money-driven nature indicated that he might have learned his technical skills as a way to save Euro Dollars on maintenance and repairs, while his street handle, Torch, hinted at what he might have done to a past property for an insurance payout. Our hipster Rockergirl seemed to be living in this bad part of town purely for the street cred, as her cramped apartment was lavishly appointed courtesy of her crime-boss father’s enterprises. In contrast, my newly-arrived Nomad continued to cast sidelong glances at the open but unassembled Ikea furniture in the corner of her apartment, instead choosing to clean and oil her trusty shotgun on the counter of the barren kitchenette for the umpteenth time rather than pursue any sense of stability or “home.”

As the scenario unfolded, we were able to see our characters’ various traits come even more into play, both in terms of their numerical skills and attributes as well as the results from their Lifepath choices. The Tech’s lack of Willpower and personal skills made him a pushover as an actual landlord and lent some moments of humor when interacting with the various tenants (though he preferred to use the term “guests” in an attempt to sound more accommodating while he was deflecting their maintenance requests.) The ditzy Rockergirl seemed to vapidly ignore the unfolding corporate plot to acquire the building property, but showed surprising marksmanship during the final confrontation. My Nomad blustered, boozed, and brawled her way through the whole affair, until she was finally able to bring her amazing Driving skill to bear in a race against time, returning a firetruck full of armed explosives to the doorstep of the corporation that had intended to level our tenement building in the name of “progress.” Needless to say, we all ran toward the camera in slo-mo as the explosion erupted in the background.

For all my criticisms, the game itself was still a blast (pun intended)–a testament to the color and depth of the setting as well as the virtues of the character Lifepath system and the stories it begins to tell even prior to the first session of play. I would have preferred to see a more drastic refinement or reimagining of the mechanics, but they’re serviceable enough in their present form and hopefully the full release of the game still has some nuance to add. All in all, I’m willing to put up with a few clunky, outdated mechanics long enough to revisit Night City in the Time of the Red—but time will tell if my Nomad heart wanders on after a few sessions. 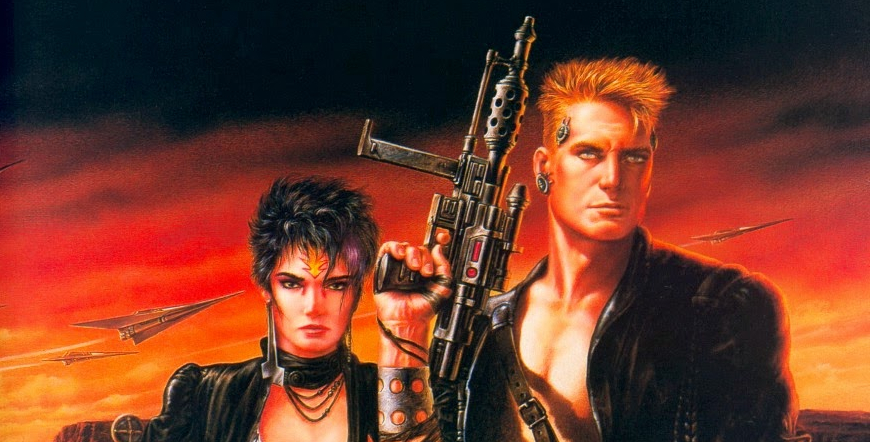 Hardwired is Classic Cyberpunk at its Best
October 6, 2016