Finding cyberpunk miniatures for role-playing games like Cyberpunk 2020 or Shadowrun can be frustratingly difficult. There are a fair amount of science fiction miniatures out there, but most seem aimed at a space opera audience rather than an audience interested in replicating the dismal, gritty streets of a cyberpunk story. Most miniatures, though, are part of the over saturated fantasy market. Some of these miniatures might be useful for emulating Shadowrun’s fantasy elements, but the high-tech elements are likely to remain elusive. Enter Ral Partha.  Ral Partha, more formally known as Ral Partha Enterprises, Inc., is a miniatures company that was founded in 1975. To some extent, Ral Partha has been making Shadowrun miniatures intermittently for the last 25 years, not to mention some of the best cyberpunk miniatures available. In particular, the 1991 Shadowrun set, which has won awards, is again available from Iron Wind Metals, which was formerly Ral Partha. 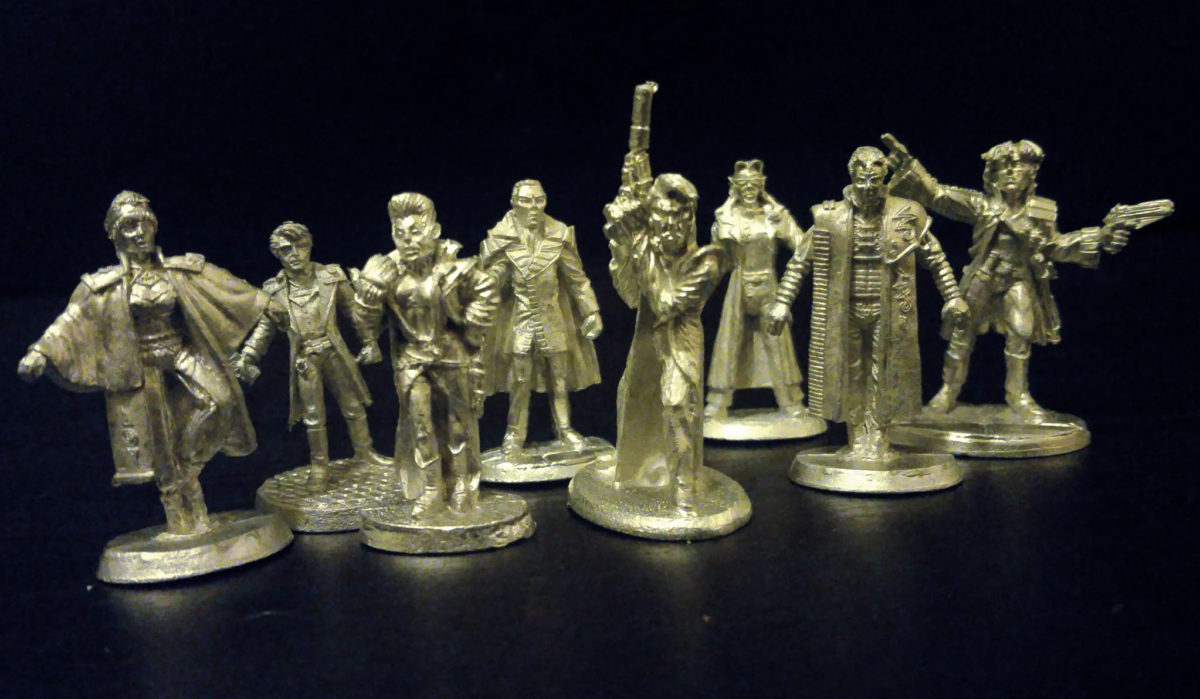 The history of Ral Partha and the casts for this miniatures set is complex but is also the history of Shadowrun. It is worth noting that another company, called Grenadier Models Inc., created the first miniature sets for Shadowrun in 1989. In 1991, FASA (the creators of Shadowrun) licensed Ral Partha to create and produce miniatures for the company. Tom Meier, Dennis Mize, and Dave Summers designed a set of miniatures that would go on to win the Origin Award for Best Fantasy or Science Fiction Figure Series in 1991. That set has had varying levels of availability since. In 1998, Wizards of the Coast canceled their contract for the production of Dungeons and Dragons miniatures, and as a result, Ral Partha Enterprises, Inc. sold the company to FASA that same year. When FASA sold the rights to Shadowrun to Wizkids in 2000, Ral Partha was one of the assets that changed hands. One year later, in 2001, Ral Partha’s miniature production was spun off as Iron Wind Metals LLC. This period that encompassed the late 90s and early 2000s was a tumultuous time for gaming, and in 2003, Wizkids was purchased by Topps (the trading card company), although Iron Wind Metals LLC. remained independent, they no longer had the right to Ral Partha’s trademarks and many of the assets. Then four years later in 2007, Topps was purchased by the private equity firm, The Tornante Company. In 2007, InMediaRes Productions, LLC gained the license for producing Shadowrun and did so under the subsidiary Catalyst Game Labs. They had no interest in the Ral Partha assets, however, and in 2014 The Tornante Company sold the Ral Partha rights back to Iron Wind Metals. This period between 1998 and 2014, largely left Ral Partha Shadowrun miniatures in limbo. That 1991 set of Shadowrun miniatures is now available from Iron Wind Metals.

I have been looking for a good set of cyberpunk miniatures for a long time, but most are either out of print, super expensive, or simply poor quality. When I found these Shadowrun miniatures I was blown away by the variety, detail, and the price. Most of the individual miniatures cost just over three dollars, which is nothing compared to the prices you see for most new miniatures. Many of these for games like Dungeons and Dragons are five dollars or more apiece, and most of them are only available in large sets that cost more than 15 dollars. So for starters, they are affordable. Furthermore, there is a reason that these miniatures won awards in 1991. The details are excellent; there is a fair representation of different character types, and a fair representation of different genders. There are also some options for villainous characters to oppose your cyberpunk heroes. There are police, spec-op teams, gangs, and even monsters for the more fantastic fare (if you want that in your game). Character details that stand out are faces, clothing ripples and folds, technology and armaments, cybernetic augmentations, and lots of sunglasses. They even carry a Snake Plisskin look-alike in one of their other sets. The miniatures are all made of metal and are unpainted. 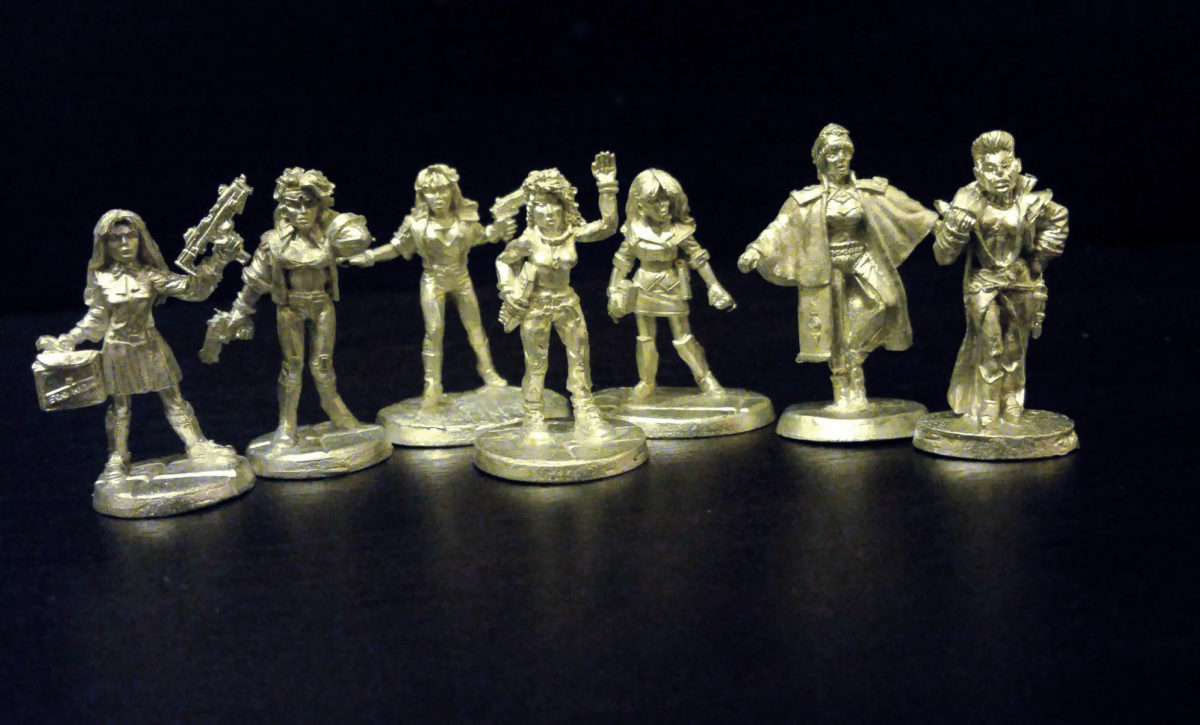 Some important things to note, though. Shipping took longer than I would have expected. When I received my first order, they accidently gave me two of the same miniature, instead of one of the other miniatures I had ordered. I never received a reply to my e-mail, but they did send me the missing miniature at no cost with a printed copy of my e-mail to them. It would have been nice to get an acknowledgment of receiving my complaint, but they did fix the problem within a reasonable amount of time. Some of the miniatures come in multiple pieces and need to be assembled. I used JB Weld, and that worked great. Most have some flash that needs to be removed. Flash is tiny metal flakes that are a result of the casting process. I had no problem removing the flash with a set of tweezers and a file.

Overall, these miniatures are the cyberpunk miniatures I have always wanted. I would recommend them to anyone who is looking for some cyberpunk miniatures themselves to spice up some cyberpunk roleplaying Shadowrun, or otherwise. There have been other Shadowrun miniatures, but either they had limited runs or are out-of-print. Frankly, though, they didn’t live up to the quality of the Ral Partha line. Tom Meier and Dennis Mize, two of the designers of this miniature set, have earned a place in the Origin Awards Hall of Fame for their contributions to gaming alongside the likes of Mike Pondsmith and Gary Gygax. That speaks to the quality these men bring to the table. This article is in no way sponsored by Iron Wind Metals, LLC.

Written by Isaac L. Wheeler (Veritas)
Veritas is a cyberpunk and writer who enjoys all aspects of the cyberpunk genre and subculture. He also journeys deeply into the recesses of the dissonance exploring his nihilistic existence. If you'd like to contact Isaac L. Wheeler (Veritas), the founder and editor-in-chief of Neon Dystopia, you can do so here: ilwheeler.founder@neondystopia.com
Previous ArticleScandroid Emphasizes Story in New AlbumNext ArticleWestworld Strays From the Path
You May Also Like