Trista is a new comic from one of the creators of Metal Made Flesh, Jeremy Biggs of Subversive Comics. Metal Made Flesh has been a high point in the cyberpunk resurgence, and it nice to see Subversive Comics adding another cyberpunk title to their properties. So far, all that has been released is a zero issue that lays down the premise, that they describe as a Mr. Robot style universe. I think that is true, but I got a lot more of an Orphan Black vibe from the story. 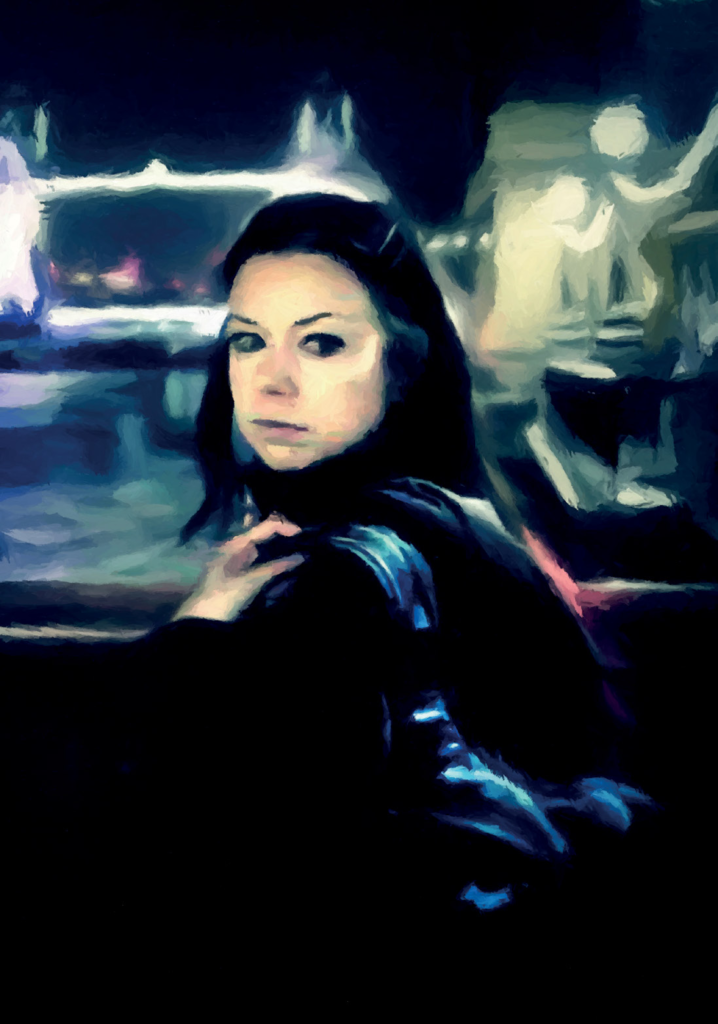 The plot is essentially that a hacker, the titular Trista, who is finishing the last leg of hacking the world’s largest financial institutions to extract blackmail materials on them. She knows what she is doing is dangerous, but hopes to use it to buy her way to safety in what she believes will be a world shattering war. Being a cyberpunk title, it is nice to see the kind of nihilistic, save your self mentality that was common early in the genre, but is often traded for freedom fighter against the machine these days (which I also like). Once she has obtained her materials she runs for it, and notices that she is being followed.

This is where the cursory thought of Bex Trista, who was the model for the story’s Trista, went from, “She kind of looks like Tatiana Maslany,” to , ‘I guess this is Orphan Black now.” Trista’s shadow turns out to be an exact duplicate of her. Despite the similarities, there does seem to be enough original going on here that this is not just another iteration of “clone club.”  I should point out that Bex Trista thinks that she looks nothing like Tatiana Maslany and was surprised by the idea to the point of vehemently denying it on her YouTube channel.

The most fascinating part of the comic for me, though, was the last panel. Where they say:

The plans of the Subaltern will turn to dust, The Masters will eventually triumph and no one will be able to stop the march of history.

In this zero issue, we really don’t have enough information to work from, but it is insinuated that the clone is not from large financial institutions. The word Subaltern probably isn’t familiar to most people, but it is a term that refers to a person has had his agency removed by society based on his social status. In the context of Trista, Subaltern seems to be a group – and the definition suggests that they are a group of disenfranchised people. So, either Subaltern are the bad guys in this story, which doesn’t seem likely, or The Masters are the bad guys, but this doesn’t seem to make sense in the context of the narration being from the point of view of Trista.

What I think is going on here, is that the narration switched from Trista to the clone, who may be taking her place, and the Subaltern are an organization (that Trista was operating independently from, but maybe unconsciously for) that is fighting The Masters, who are the financial giants. But then why would their plans turn to dust? Is there possibly a third entity we remain unintroduced to that is at work here? We’ll have to wait and see.

There is not an official release date for the forthcoming graphic novel, but they do say that they hope to have it out next year. Based on Subversive Comics’ behavior in the past, we’ll probably see a Kickstarter to fund the comic. You can download the zero issue here.

Written by Isaac L. Wheeler (Veritas)
Veritas is a cyberpunk and writer who enjoys all aspects of the cyberpunk genre and subculture. He also journeys deeply into the recesses of the dissonance exploring his nihilistic existence. If you'd like to contact Isaac L. Wheeler (Veritas), the founder and editor-in-chief of Neon Dystopia, you can do so here: ilwheeler.founder@neondystopia.com
Previous ArticleLast Week in Cyberpunk 12/9/2016Next ArticleLast Week in Cyberpunk 12/16/2016
You May Also Like