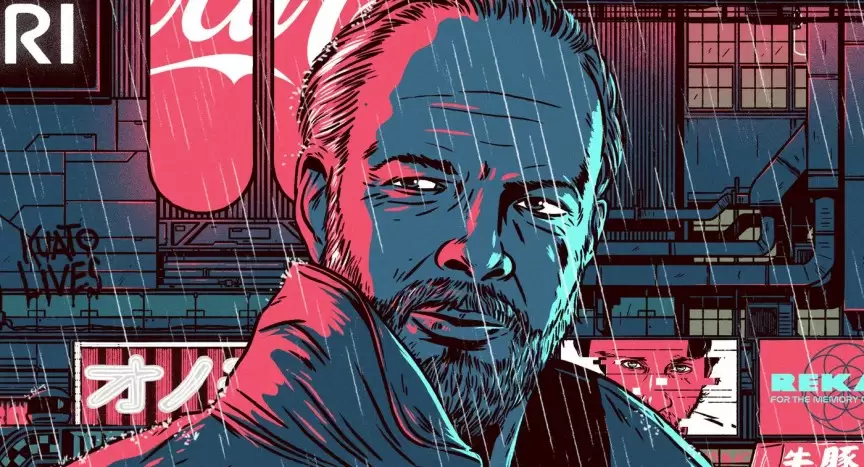 Philip K Dick published a whopping 44 novels and 121 short stories before he died at the early age of 53. That’s about 44 novels more than most aspiring science fiction writer write in their lifetime.

The main theme in his writing was the uncertainty of reality, and he touched on themes including alternate realities, simulacra, large corporations and authoritarian governments, drug abuse, and altered state of consciousness. His books often asked questions concerning the nature of reality, perception, and human morality.

Many of his works have been adapted into movies or television series. His 1962 alternate history novel, Man in the High Castle for instance, won a Hugo Award for best novel before later becoming adapted into a multi-season series on Amazon.

He also wrote Do Androids Dream of Electric Sheep in 1968, which inspired the legendary 1982 classic Blade Runner, and A Scanner Darkly, which was adapted into film in 2006 with the same name.

There’s a good chance you’ve actually seen many PKD-inspired movies without even realizing it. In addition to Blade Runner and A Scanner Darkly, if you’ve seen Total Recall, Minority Report, The Adjustment Bureau, Next, or Paycheck, can you guess what they all have in common? Yep, they’re all adaptions of PKD’s work, the latter five all from short stories.

His other famous novels include Flow My Tears, The Policeman Said (1974), which won the John Campbell Memorial Award for Best Science Fiction Novel,  Ubik, and VALIS. In 2007, Dick became the first science fiction writer to ever be included in The Library of America series.

One prominent critic, Frederic Jameson, called Dick the “Shakespeare of Science Fiction” and said his work was “one of the most powerful expressions of the society of spectacle and pseudo-event.” Another author, Roberto Bolano, called him “Thoreau plus the death of the American Dream.”

If you look up Philip K Dick, you might not find him as a standard cyberpunk author like William Gibson or Richard K Morgan. That’s because the term cyberpunk didn’t exist at the time–Dick is proto-cyberpunk. But if you look at the influences and inspirations many modern classic cyberpunk films cite, you’ll often see Dick’s name pop up again and again.

His work has been compared to films such as The Matrix, Videodrome, eXistenZ, Eternal Sunshine of the Spotless Mind, Dark City, Gattaca, 12 Monkeys, Looper, Inception, and many more.

Discovering the Man behind the Writing

But who was this man, exactly? How was he able to write so much, and what kind of man would write this kind of vivid alternate reality science fiction?

Philip K. Dick was a prolific science fiction writer who was born shortly before the Great Depression in 1928. Both Philip and his twin sister Jane were born six weeks prematurely on December 16th, 1928 in Chicago, Illinois. Unfortunately, six weeks after birth, Jane died suddenly, and this created a profound effect on Philip’s life, resulting in what he describes as a “phantom twin” motif in his books. When Philip was five, his parents divorced, and his mother raised him in San Francisco and Berkeley, California.

Philip K Dick would marry and divorce a total of five times in his life. In May 1948, Dick married Jeanette Marlin, but the marriage would only last until November of the same year. The following year, he married Kleo Apostolides in June 1950. His marriage to Kleo lasted 9 years, before he divorced in order to marry Anne Williams Rubenstein on April 1st, 1959. This marriage would last until October 1965. Then a year later he married Nancy Hackett, and his marriage with his fourth wife lasted from 1966 to 1972. His fifth and final marriage was to Leslie Busby, and lasted from April 1973 to 1977.

Dick was always poor throughout his life, especially in the 1950s when he was just starting off as a writer. His first success was with the publication of The Man in the High Castle, which won the Hugo award the following year. His books were nominated multiple times for the Nebula award, and some, such as A Scanner Darkly and VALIS, won several international awards. To keep afloat, he also wrote many short stories for science fiction magazines.

Drug Use and Suicide Attempt

In order to maintain his frantic pace of writing, Philip was known to take amphetamines every day for years, with his doctor eventually telling him his liver was so efficient it processed the drug before it lit up his nervous system. In 1971, after his marriage with Nancy collapsed, Philip opened his home up to drug addicts (this being directly responsible for the later writing of A Scanner Darkly, the book being dedicated to other fellow addicts), until one day he came home to find his home burglarized and his safe blown open, with many of his personal papers missing. The police were never able to find the culprit, but secretly concluded that Philip may have done it to himself. After that Philip kicked out all the squatters in his home, and then the following March attempted suicide by overdosing on a sedative. As a result, he was admitted into X-Kalay, a Canadian recovery program.

In 1974 after recovering from some anesthesia for an extracted wisdom tooth, a woman visited Philip’s home wearing a golden necklace. The sun reflected off her necklace and created a pink beam that mesmerized him, and Philip believed the beam to be intelligent and could impart wisdom. This led him to writing VALIS, which stands for Vast Active Living Intelligence System; this system being an alien/Gnostic interpretation of the Christian God. He would start having many hallucinations during the months of February and March of 1974 either brought on through schizophrenia or some residual damage from his past drug use.

Philip K Dick died in March 1982 from a series strokes. He was buried next to his twin sister Jane, as he requested. He died four months before the release of the movie Blade Runner. He left one work unfinished, The Owl in Daylight.

This would not be the end of Philip Dick, however. He would again grace our mortal coil as not a man, but a machine. Built by Hanson Robots via the University of Memphis in 2004, the machine was meant to physically resemble the late author in every way technology could allow, including a realistic face, height, clothes donated by his daughters, and a brain full of past interviews and talks. However, in 2005 David Hanson (founder of Hanson Robots) lost the android head during a flight to northern California to the HQ of Google , where it was to be the center of an exhibition of the company’s top engineers and scientists. A true Phildickian twist!

To this day, the head was never found.

Dick was a real skeptic in the nature of reality. Through his writing, he asks the reader, “How do I know that my internal view of reality is real?” Maybe, he thought, there are many different realities, much like the eyes of flies.

Philip K Dick gave this speech near the end of his life at an event in Metz, France, which shocked the attendees. It also quite eerily resembles parts of The Matrix, probably because the Wachowskis were inspired by PKD. The similarities are too uncanny.

“We are living in a computer-programmed reality, and the only clue we have to it is when some variable is changed, and some alteration in our reality occurs. We would have the overwhelming impression that we were re-living the present – déjà vu – perhaps in precisely the same way: hearing the same words, saying the same words. I submit that these impressions are valid and significant, and I will even say this: such an impression is a clue, that in some past time-point, a variable was changed – re-programmed as it were – and that because of this, an alternative world branched off.”

The Philip K Dick Award and its Clues for the Future

The list of Philip K. Dick awards may give us clues into the influence future cyberpunk books will have on culture and society. While not solely cyberpunk, of course (it’s an award for science fiction in general, and awards novels that are dystopian or steampunk in addition to cyberpunk) it is interesting to see past PKD award winners and what they have become.

For instance, the first award given after PKD’s death was to Rudy Rucker for his first biopunk novel of the Wetware Tetralogy, Software. Rudy Rucker is well-known as one of the original cyberpunk writers of the late ’80s and early ’90s (the Tetralogy being reprinted in it’s entirety in 2010), with his works exploring mortality, generational difference, technological advancement, consciousness, and recreational drug use. He won the award in 1982 before the release of Neuromancer or Blade Runner.

Speaking of which, the third PKD winner was indeed Neuromancer, and we all know how influential THAT particular novel was. So that means that not only was one half of the origins the term cyberpunk originated from a novel PKD wrote, the other half was the novel Neuromancer which won the PKD award. So PKD really was there since the beginning, since before the term even existed. He was Proto-Cyberpunk.

After that, the next notable winner was Richard K Morgan, with Altered Carbon in 2003. The rights to his novel were later bought by Hollywood, thus allowing Morgan to quit his daytime job as an English teacher and become a full-time writer. It also resulted in his story becoming the highest-budget series on Netflix with two seasons already out as of this writing.

So what does this mean? Well, we can look at other novels that have won the PKD award, and cross-reference them with ones that have also been sold to Hollywood. One such recent book is Apex, part of the Nexus Trilogy written by Ramez Naam and published in 2015. The rights to Nexus were sold to Paramount in 2013. So will it be made into a movie? Will Naam’s trilogy become the next influential Cyberpunk work? That remains to be seen.