One of the many singular delights of new Netflix movie Okja, the first new film from visionary auteur Bong Joon-ho since his cyberpunk classic Snowpiercer, is that it’s nice to finally see a mainstream sci-fi depiction of Seoul from a South Korean.

The last time we saw a cinematic chase scene set in Seoul was in Avengers sequel Age of Ultron, a mid-section sequence which had a blink-and-you’ll-miss-it view of the capital city. More prominent and also more recent examples of Seoul in sci-fi include another Netflix production Sense8, home as it is to Sun Bak (Bae Doona), one of the show’s telepathically linked heroes, and 2017’s Colossal, where it stood witness to a giant rampaging monster with telepathic ties to a human in America. This was the indie kaiju film with Anne Hathaway starring as the human, whose various demons and alcohol addiction are manifested in the Godzilla-like avatar which she inadvertently controls, causing city-wide destruction in her path despite being nowhere near Korea.

This idea of a foreign national ‘making their mark’ in Seoul so to speak has some precedent in sci-fi media. Take the American expat hero of Enormity, for example, the 2012 novel from author Walter Greatshell writing under his SF guise of WG Marshall. Some intrigue involving a North Korean weapon sees our clueless hero, Manny, grow into a colossal-sized human, eventually taking on a similarly-sized female spy from Pyeongyang. Both giants cause destruction to Seoul, with Manny doing so more by accident than ill will. Does that remind you of anyone, by any chance? 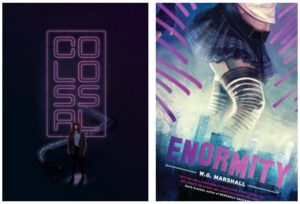 Both Colossal and Enormity symbolise the intriguing trend for foreign sci-fi creators to deconstruct Seoul in their own name, something which I am also guilty of as a writer. Arguably, the trend started with Cloud Atlas. Those familiar with David Mitchell’s 2004 novel will have found a vision of a South Korean future where its most prominent city was a sci-fi landscape teeming with cloned slaves. The cyberpunk tenet of an oppressed underclass rings loud and clear, but so does a link going back to William Gibson’s 1980s conjuring of a future Japan, the first time Western writers began to craft East Asia as a landscape for our dreams. All Mitchell did was replace Tokyo with Seoul.

More recent novels on Korea by British and American writers have continued with such science-fiction renderings of the country, regardless of their present day settings. Time travel and more cloning can be found in novels such as Kingdoms in the Sun by Ian James and the Naomi Foyle cyberpunk of Seoul Survivors respectively. My own Seoul-set novel Funereal has been described as dystopian fiction, even though everything in the book already has precedent in present-day South Korea, such as live burials as for the depressed, and cosmetic surgeries as routine as they are risky, and perhaps even regressive for various notions of identity. (That said, you won’t find the holographic masks worn in its pages by wannabe idols to help them get used to their future faces, but give it time folks!)

It’s only fair to assume then that Korea lends itself as a sort of SF playground to foreign writers, as fascinating as the 1980s Tokyo which enraptured Gibson. Many of those who come to the country are immediately struck by its comforts of 5G data, ultra-modern medical tech, and fast-moving subways, things which must seem futuristic to the outsider, even visitors from as close by as Japan and Singapore. Proving this is how hard-pressed you’d be to find an English novel on modern Korea that doesn’t swim in sci-fi circles. By contrast, you’d be lucky to find a Korean writer using science-fiction to talk about his or her country. As author Gord Sellar notes, ‘Korean society is a society in which SF is not a major genre, and it has yet to spring to life as a native literature.’

Proving this playpen mentality is the fact all these writers use foreign nationals as avatars of their own to plow through the city and strangeness they have adapted, something which I strove to rectify with the all-Korean cast of Funereal. The Wachowski movie adaptation of Cloud Atlas for example even goes as far as to cast white actors in Korean guises, the uproar from which the Wachowskis are probably trying to rectify with Sense8‘s Sun Bak and her social circle. I would say though that having Sun be a kickboxing champion does veer near to the stereotype that all East Asians are good at combat sport – are the directing duo once again constructing Seoul from a dream cityscape of their own notions and imagination, even if this version of the city is not one set in the distant future of Cloud Atlas?

Going back to Okja again, it’s nice to see Seoul in a global production with a global ensemble that also makes manages to make room for a Korean main character. Bong Joon-ho pulled off a similar trick with Snowpiercer, although that was an ensemble cast that happened to feature two Koreans. Also, while Snowpiercer was set on a train in the far flung future, Okja is set in a version of the now that features a genetically modified creation on the run from the machinations of an evil and faceless multi-national. This is the cyberpunk present we live in, people, and the fact that the action spans to the States shows that cyberpunk is no longer the realm of 1980s Japan or 21st century Seoul through the gaze of a Westerner. It is the world all around us, embodied in the technology we have long since adopted from abroad.

If you like to get a taste of cyberpunk depictions of South Korea you can find them at the following links:

Funereal by our own Giacomo Lee

Cloud Atlas from the Wachowskis

Written by Giacomo G L E E
Giacomo is author of Funereal, a novel set in Seoul with cyberpunk themes. Black Mirror meets Black Swan in a look at the unique 'fake funeral' industry of South Korea - for fans of Mitchell, Gibson, Sterling and Murakami.
Previous ArticleLast Week in Cyberpunk 5/26/2017Next ArticleLogan: Future as Allegory
You May Also Like