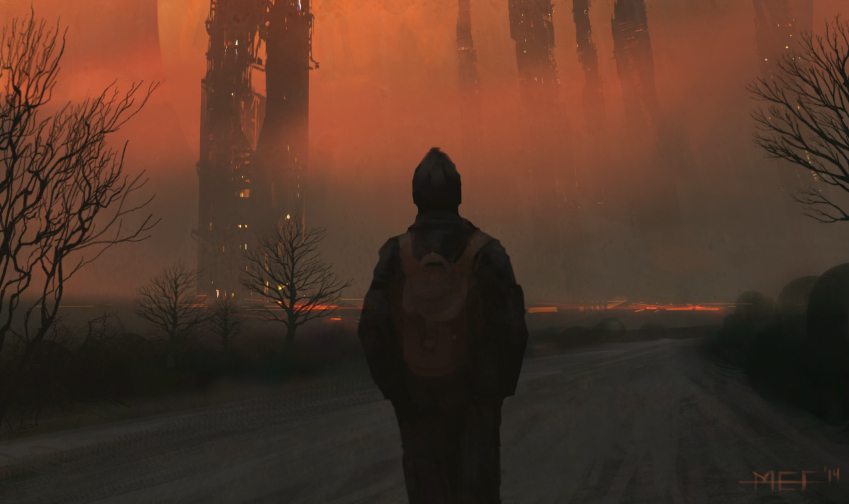 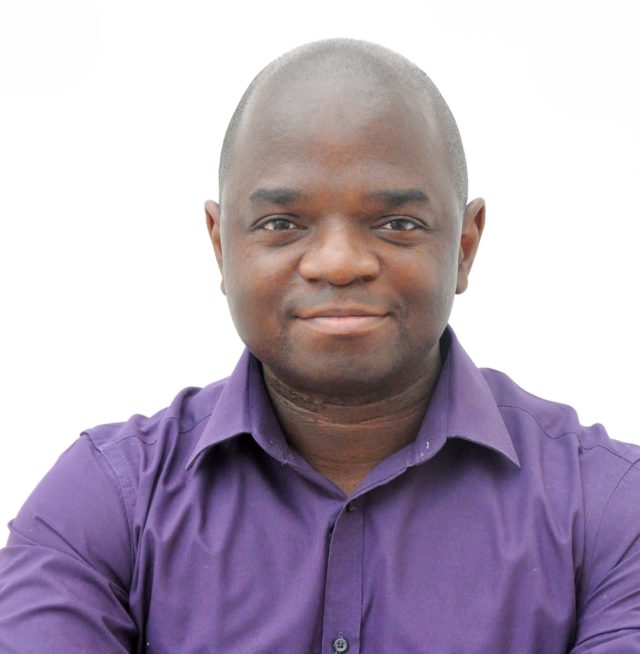 Cyberpunk is a genre that is dominated by white male writers. Due to this situation, despite being true of all science fiction, I am always on the look out for cyberpunk that is written by women, non-white authors, or stories told from non-western perspectives. Tade Thompson’s Rosewater from Apex Publishing, which is set in 2066 Nigeria, is just such a book. It is so much more than that. It is one of the best modern cyberpunk stories I have read.

Rosewater is the name of a town that grows up around a mysterious phenomenon called Utopicity, which is a dome-like structure that occasionally opens and heals all those around it. Kaaro, our protagonist, is a sensitive (or a psychic) who finds work as bank security against other sensitives and as an agent for a mysterious government agency called S45. Kaaro has a complex past of thievery, renegade sensitives, black ops, and the emergence of Utopicity itself. When other sensitives start dying of mysterious circumstances, Kaaro is forced to face his past and the future of all humanity.

Something that is often lost in the trope cloning of cyberpunk is the visceral quality that early books and 80s movies captured so well. Bruce Sterling said in the Mirrorshades introduction, “For the cyberpunks, by stark contrast, technology is visceral.” William Gibson said it a different way in an interview with the Paris Review, “I … wanted science fiction to be more naturalistic. There had been a poverty of description in much of it. The technology depicted was so slick and clean that it was practically invisible. What would any given SF favorite look like if we could crank up the resolution? As it was then, much of it was like video games before the invention of fractal dirt. I wanted to see dirt in the corners.” Thompson’s prose sweats, bleeds, pisses and cums on the page, yet it never feels out of place. It is true; it is human. The technology has a similar quality. It feels real by being so perfectly interwoven into the world that the characters take it for granted. Everyone has implants that track them and carry data but reading any random page, you might think Rosewater‘s 2066 is Nigeria today. Much of this realism in relation to Nigeria may be attributed to the fact that Thompson has lived in Nigeria, although he now lives and operates in the South of England. Possibly the most unsettling technology in Rosewater are the COBs, short for cyborgs, which are birds and cats that have been cybernetically augmented to act as mobile surveillance systems,

Even the aliens in Rosewater are visceral. I know, aliens. At first many gasp, “There are aliens, it can’t be cyberpunk.” First off, there are aliens in Neuromancer, Dr. Adder, The Artificial Kid and the cyberpunk classic aptly titled: Alien. Secondly, read this description of the Floaters,

Floaters don’t see well, but they do combine visual and olfactory stimulus with auditory input to create a devastating composite.
He charges me, the rope from around his neck flying in the air behind him like a torn umbilical cord. The inflated gas bag looks like a fleshy parachute or rucksack and the silent flight makes me underestimate the speed. He is in my face before I can react, and grips me with both fore and hind claws. As he lifts me from the ground I ignore the needle like pain of his grasp and place both hands under his chin, pushing back. I hope this will keep him from biting me, though the blood and the crazy jarring motion makes it difficult to keep my grip. A gurgling sound and powerful stench comes from the bladder. We rise slowly because of the combined weight. He may just want to raise me up and drop me, dash me against the concrete to make a softer and more cooperative prey. I try to see his mind, and that is a mistake. I feel the raw, unknowable alien mind and it stuns me. Maybe it uses different neurotransmitters or the direction of impulse is different, but connecting sends a shaft of pain through me. It is like a head full of broken glass. His thoughts or impulses or whatever pick at my neurones one at a time and I nearly lose my grip on the chin. He snaps his jaw and through my headache I see flecks of flesh between his teeth. 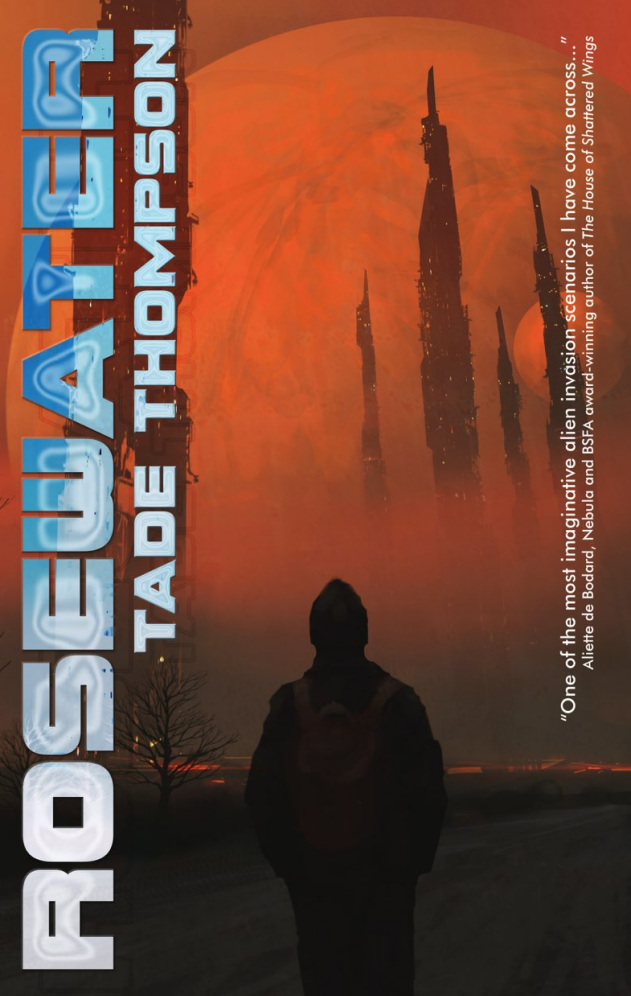 I often balk at aliens, because they are boring reiterations of others, or humans with antennas. When I find an alien like the Floaters, I perk up. I wouldn’t want to meet one of these in a dark alley or chained up as a guard dog as this one was when Kaaro encounters it. They aren’t the only awesome aliens we are introduced to, but I will avoid spoilers.

The xenosphere is another novel cyberpunk concept that fits seamlessly into the world created by Thompson in Rosewater. The xenosphere is the mechanism by which sensitives gain their powers. It is a kind of fungal network that links minds, it’s power can even be suppressed with antifungals. Within the xenosphere, one can enter a kind of VR environment where the sensitive can take on any form; Kaaro’s is a Gryphon. It all feels very much like the Matrix from Neuromancer or the Metaverse from Snow Crash.

The worldbuilding in Rosewater is simply stunning. Rosewater feels like a real place, with real people. The xenosphere is explained in excellent detail with almost no info-dumping. This is true of about everything in Rosewater. “Show, don’t tell,” may very well be the mantra of this book. Rosewater comes off as very intellectual, because of the lack info-dumping, but also because Thompson expertly employs precise language. This sometimes left me scrambling for a dictionary, but also made for vivid prose.

The ending of the book was the only thing that left me wanting. I could feel it 50 pages off. Rosewater is an alien invasion story, but it never feels that way until the very end. Then it hits you, like a brick wall. It fit well with the story. It followed logically from all of the presented premises. It was even a fairly unique take on the idea. I just wanted something… else. The end suddenly makes the struggles of the characters for the last 250 pages feel meaningless. Perhaps, this is a dash of cyberpunk’s nihilistic side. Alternatively, the ending is a fantastic allegory for Western imperialism and mirrors our domination of the Americas as much as it does African colonization.

Rosewater was one of the best modern novels that I have read. Period. It doesn’t hurt that it is also cyberpunk, but I would recommend this novel to anyone. Not just cyberpunk fans. You can get a copy here.

Written by Isaac L. Wheeler (Veritas)
Veritas is a cyberpunk and writer who enjoys all aspects of the cyberpunk genre and subculture. He also journeys deeply into the recesses of the dissonance exploring his nihilistic existence. If you'd like to contact Isaac L. Wheeler (Veritas), the founder and editor-in-chief of Neon Dystopia, you can do so here: ilwheeler.founder@neondystopia.com
Previous ArticleCyberpunk Music Dossier – January 2017Next Article‘She was only attached to the limb, after all’: A Review of L0WL1F3 no. 2