If you read our recent interview with Ren Warom then you’ll already know that I love Escapology. It is one of those rare books that manages to cram a great deal into far too few pages and not suck for it. Taking classic cyberpunk tropes as a starting point, it swiftly throws a heap of other influences and ideas at you; JRPG and anime vibrancy, new weird & gonzoid madness, and a setting so bright your eyes shrivel like pickled onions. It’s not a delicate balance nor a beautiful one, but it is damn tasty, and like some of the best art, it hangs on urgency, feeling like it could explode at any moment. 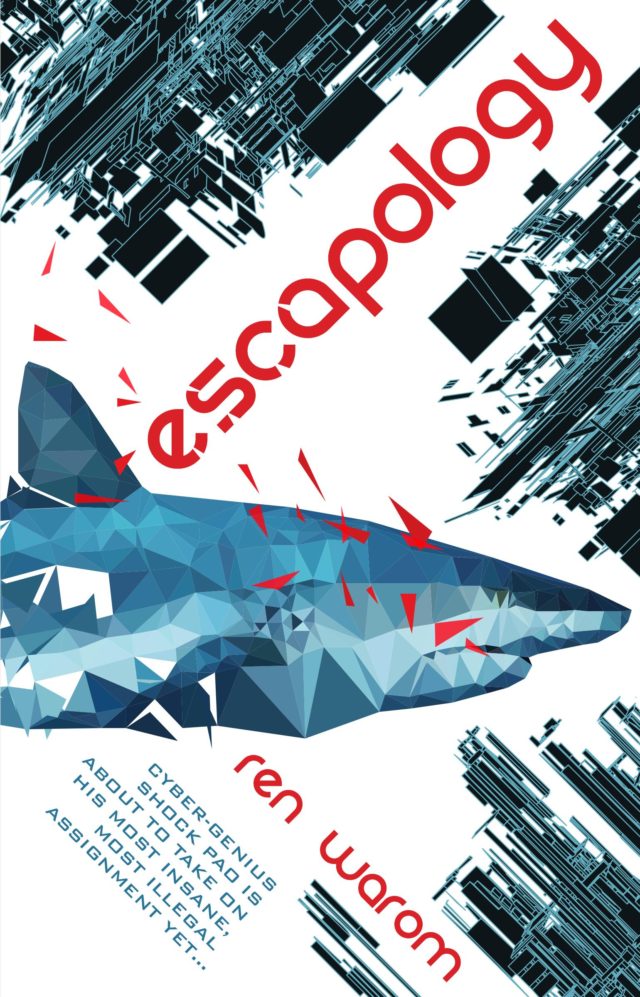 In Foon Gung, Shock Pao twitches with tiredness, strung out from his last hacking job. As a Haunt, Pao is used to spending his time in The Slip, the virtual reality world in which he makes a living, but he’s struggling. Pao is good, perhaps the best, but he’s also crippled by drug addiction and creeping paranoia, constantly fearing repercussions from those he’s crossed or wronged in the past. This includes ex-girlfriends, specifically those that come to him with heist jobs that involve the sort of people he is doing his best to avoid. And then there’s Amiga; an assassin tired of life and looking for a way out, only she can’t find one. Under the employ of the psychotic Twist Calhoun, crime lord and all-round untrustworthy bastard, she’s not particularly likely to find that escape any time soon unless something drastic happens. Cue big jobs, paths crossing and a brick to the readers face.

Escapology’s setting is vibrant, the prose peppered with description rather than thankless blocks of exposition, and is far more colorful than the dreary neon nights often found in cyberpunk fiction. The Slip itself is an enigma; a sort of VR underwater dream where avatars appear as aquatic creatures. In never entirely being explained a sense of wonder is dangled over the reader – you keep reaching for it but it’s just slightly beyond your reach. Warom’s cast of characters, each as morally gray as the last, is also wonderfully rendered. Whilst strong themes of addiction run throughout, it never becomes a pity party. Rather, it’s a story about lifting your chin, puffing out your chest and just doing it. And that is precisely what happens, right through to the very battered and bloody climax.

Over the course of its pages, Escapology reads like a roller coaster put to paper; it’s a high-tension work that plummets and soars, then loops back on itself just when you think you’ve been left time to breathe. The language fuses a very British sensibility with eastern street slang and all kinds of (probably) off the cuff futurisms that work better than they probably should. Warom’s use of the present-tense ensures that we are kept in the moment, and her near-stream of conscience approach means we never entirely know what is going on. In fact Escapology leaves a lot unsaid. Warom, it seems, is quite trusting of her readers to not need dots joining, nor details spelling out. Hell, it doesn’t even matter if we entirely get it. What matters as that we’re here and present and enjoying the slightly wonky and very violent ride.

There are moments where the ride gets too wild. Once or twice I found myself out my depth, drowning somewhere off the coast, before a mangled hand pulled me back for air. But, much like an auto-asphyxianado, I found myself enjoying those moments without air. Drowning was quite pretty when there were sharks and octopuses and everyone was broken and beaten. The dizzying pace of Escapology did however leave me a little confused at the end. It was one of those WTF? moments that normally require some back-pedaling to understand. Unfortunately, with limited time I was unable to go back and reread elements of the book, although that pretty much does ensure a full-reread at some point in the future.

There’s a kind of irony to Escapology that I missed at first. It was only as time passed that I realized that each chunk of time spent reading dragged me deeper. For a book dealing with addiction, Warom certainly does know how to hook a reader. I found myself caring about the characters survival. Even though they were shitbags, they were my shitbags. The sequel, Virology, is schedule for release sometime next year and Warom has stated that everything is going to be amped up. I for one can’t wait.

You can purchase Escapology in paperback here or get it as an ebook here.

A Conversation with Ren Warom, Author of Escapology
September 14, 2016