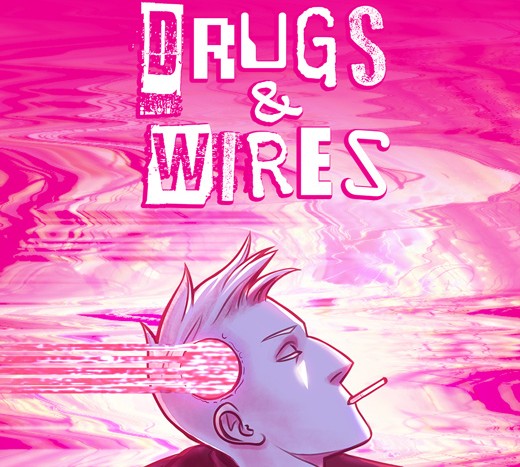 Close your eyes and picture the nineties. Imagine the Windows 94 logo as if on a black computer screen, jagged with thick pixels and bleached by the bright light of the cathode tube behind the monitor. Let it bounce over the surface of your mind just like it did in screensavers and remember what the nineties offered. The mass-manufacturing of computers for a consumer audience was a cultural moment, with the promise of fulfilling predictions from mid-century science fiction novels. Powerful computing devices capable of connecting across the entire globe were finally accessible to anyone.

That is the feeling Drugs and Wires manages to capture, week by week, page by page. Written by Io Black and illustrated by Mary Safro, Drugs and Wires is a retro-futuristic cyberpunk webcomic that updates on Wednesdays on their custom domain, http://drugsandwires.fail. The story is set in the fictional Eastern Bloc country of Stradania, amid technological advances that far outstrip modern ability, while packaged in the gray plastic towers of desktop PCs. The story follows Dan, a deliveryman, drug addict, pretentious follower of dismal art, and a wirehead. Stradania is home to the world’s only population of wireheads, people who voluntarily implant computer hardware into their own brain tissue in order to play virtual reality ‘trips’. Unlike in other scifi worlds of this ilk, trips aren’t globally popular. In fact, the company that invented the technology is on the verge of going bankrupt after failing to attract an audience anywhere but in Stradania. The country is poor, technology rare, and Dan’s fellow wireheads are computer engineers by necessity. The embargo, national poverty, and nationalistic anti-Western technophobia contribute to such scarcity that the cyberpunks of Stradania build and code most of their technology by themselves, and share download links in zines such as Fear_and_Loading. The collectivism involved in their craft makes for a tight-knit subculture, which makes it all the more traumatic when a computer virus permeates the VR scene that kills anyone who uploads it.

Digging a hole in his head to fill with circuitry is a high risk surgery. The so called ‘Skullfuck’ virus, also known as the Worm, causes the tiny processor to overheat, burning the delicate biological wiring inside the brain, which is what happens to Dan. After a long rehabilitation period, Dan is stuck with the inert Worm program in his implant that renders his hardware useless. He can no longer connect with his chosen community, nor can he engage with his favorite outlet for self-expression. Like many cyberpunk heroes before him, Dan sinks into depression and self-medication, until he begins to question the Worm’s source.

The story uses every tool in the cyberpunk gearset, and yet a sense of delight permeates every page. Dan’s nihilism is more of a punchline than an actual lens to see the world, a parody of grimdark nineties anti-heroes. When paired with the manic, sadistic cyberdoctor Lin, Dan becomes more of a fixture of the cyborg scene than an audience viewpoint character, or even an author’s mouthpiece. Dan becomes human because he is seen from outside himself as a deeply flawed and bitter man. Characters pity him and grow frustrated with him in equal measure, and Lin only sticks around because she can use him.

Drugs and Wires is populated by loving parodies, from the dark and mysterious rivethead mastermind Sandman (who uses computer-enhanced dogs to patrol the city) to the dreamy, distant CEO of the collapsing VR empire in America. Safro’s cartoonish lens employs stereotypes as if seen both within their respective subcultures, and without. America, for example, is seen by the Stradanians as a glistening land of plastic and excess, full of spoiled child-like consumers who toss aside anything that can’t keep their attention. The audience, however, has the benefit of glimpsing behind the commercial facade. Just like in the real world, American manufacturing is over, and the comic depicts an entire factory of workers being toyed with, then discarded. The fear of the employees in the VR programming company is not only palpable, but fully justified, as the ship begins to sink with no sign of rescue. The contrast re-frames the Stradanian perspective while adding pathos to the advertisements littered throughout the series.

To contrast, Americans view Stradania as a backwater. Their interest in VR is treated like damning evidence of the technology’s uselessness. Io Black strikes a perfect balance between perception and reality when contrasting national poverty with personal experience. An American sales representative is stranded in Stradania’s central city of Unylsk, and in similar fish-out-of-water stories the narrative would rely on a strong contrast between the two global experiences. Instead, she maintains her agency. Her predicament isn’t due to her naivete, but a result of getting fucked over by her bosses, by the collapsing infrastructure of the VR programming company, and finally by Unylsk corruption. She is surprised by the poverty and disrepair of the city in a way that feels human, informed by real examples of culture shock, of trying to be respectful and stumbling due to inexperience.

The representative, Troy Huynh, provides the audience with the perspective to see the advanced technology of the US. Her hardware is glossy, versatile, and discreet, unlike the threadbare robotic arms of Stradania’s cyborg population. Technology folds seamlessly into the wealthier American lifestyle, while in Stradania the connection chafes. This dichotomy is reflected in Safro’s designs. Her retro-future America draws heavily from vaporware; the colors are pastel, the packaging sleek, the settings minimalist. Pink backgrounds signify wealth in Drugs and Wires. Meanwhile her Unylsk character designs draw from nineties subcultures, with a backdrop of cool blues and greens.

There is Vlad, the black trenchcoat-wearing, vampire obsessed edgy narcissist, Shitparade sporting a mohawk and studded battlevest, the Cybernator in colorful neon goggles with bright blue hair, and Fixer in heavy, earth-toned industrial garb. These characters are archetypes, and thus are subject to the comedic pitfalls typical of caricature, but beneath the references built into their character designs, they have life. Each character has goals, and despite all the pain the creators subject them to, they want to live. Even better, they want to flourish, and they are intelligent and resourceful enough to adapt to roadblocks that disrupt their path. Characters who have to leave the cyborg subculture don’t give stale “grow up and sell out” speeches, but they do politely ask old friends if they’re taking care of themselves. Their old experiences don’t vanish, but inform their new futures. There is a healthy desire to grow in every facet of the comic.

But, because it takes place in the nineties, wasted potential is a larger theme than healthy growth. Dan and his friends are losers. They steal software, build bad VR trips, make no money and work dead-end jobs. Troy Huynh is a failure despite all her best intentions. The advanced technological landscape does nothing for the cast, despite their talents. It’s almost as if, even with the future realized, the promises it held pale in comparison to the disappointment of the present.

Yet, they endure, laugh through the insanity, and we are right there with them through their grimy (and often hilarious) adventures.

O F Cieri is a New York based author who likes loud music and old furniture. Her first novel, Lord of Thundertown, was published by Ninestar Press January of 2020. You can follow her stream of conscious posts @obfvscate