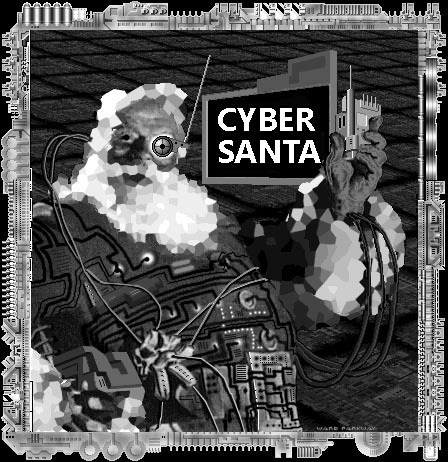 Cyber Santa by Jim Leftwich, from 1993’s edition of Beyond Cyberpunk!

Christmas is a holiday that by it’s very nature rubs a lot of cyberpunks the wrong way, because of it’s overly consumeristic nature, appropriation of culture, stories that lull us into accepting the surveillance state, ect. In the cyberpunk Christmas there is not a lot of happiness, rather a nihilistic acceptance of human nature and the people who use Christmas to avoid eye contact with the dark underbelly  of the world. The list below should get you through the holidays on the dystopic side.

This is a short in the form of a trailer for a non-existent movie called Snowdin, about an elf who leaks the naughty list. Great commentary on the Snowden links in the form of a Christmas satire. 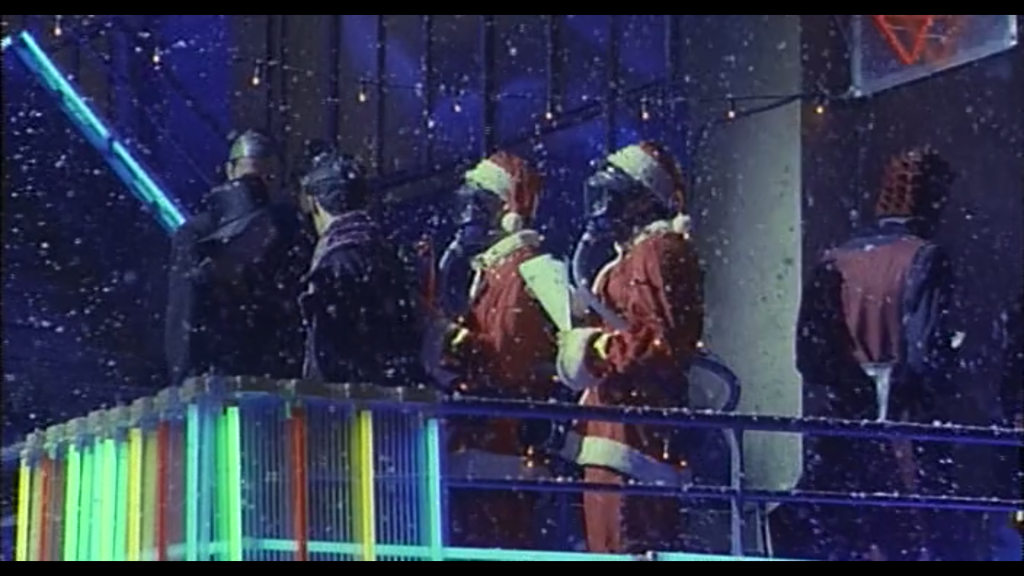 Nirvana is the quintessential cyberpunk Christmas movie. It follows virtual reality video game designer, Jimi Dini (played by Christopher Lambert), who realizes that the virtual reality character for his most recent game is experiencing and remembering his multiple deaths. Dini sets out on a quest to destroy the video game, Nirvana, which he created and is set to be released on Christmas day. 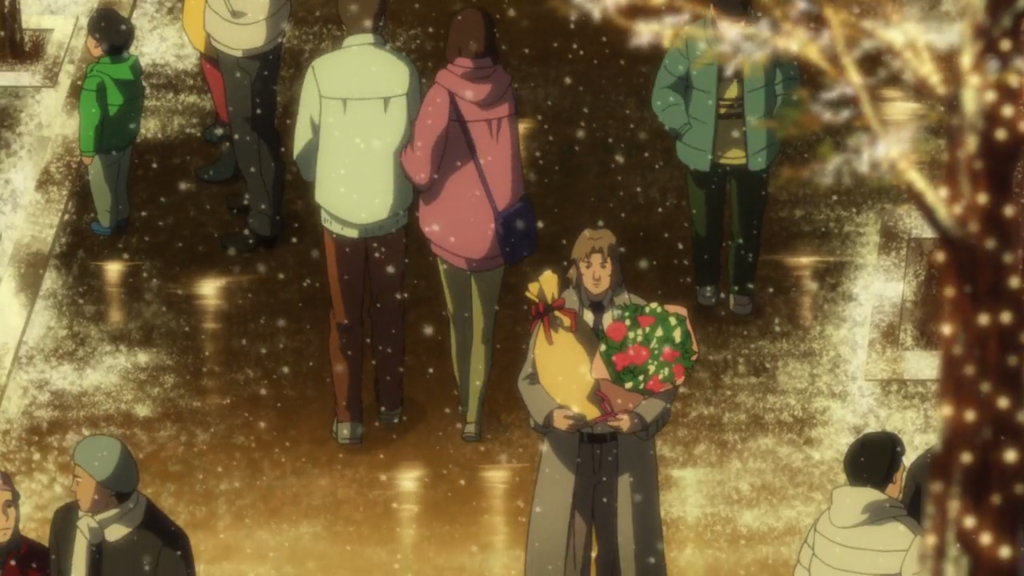 In the fourth installment of Ghost in the Shell Arise: Ghost Stands Alone, the story is set during the holiday season. The plot follows Motoko as she hunts down the Firestarter virus. 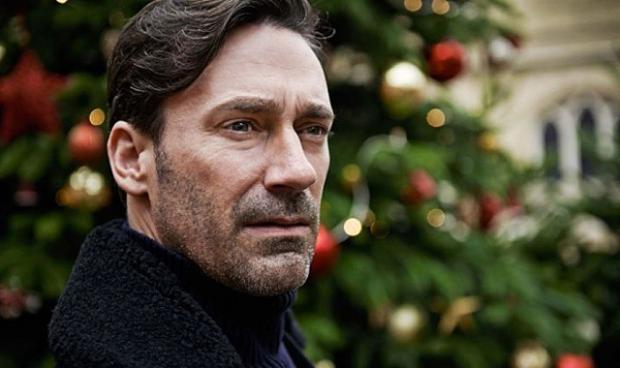 Black Mirror is an anthology series, like the Twilight Zone, but much darker. In this episode, White Christmas, we follow Joe Potter who through the use of smart homes, virtual reality, and augmented reality to bring about a very depressing Christmas. That sounds vague, but I am trying not to spoil this great story. 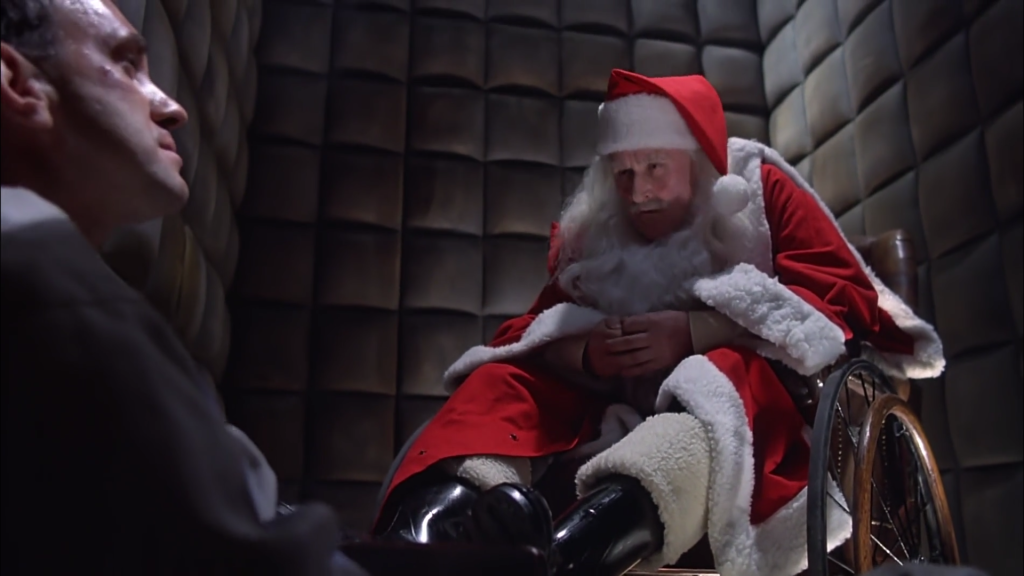 The story of Brazil follows Sam Lowry, a low-level bureaucrat, who is charged with resolving an error made by the bureaucratic machinery that results in the death of the wrong man. This movie, written and directed by Terry Gilliam, is littered with Christmas imagery. It is a dark story for our dark hearts. Here is a link to the review I wrote last year.

The City of the Lost Children 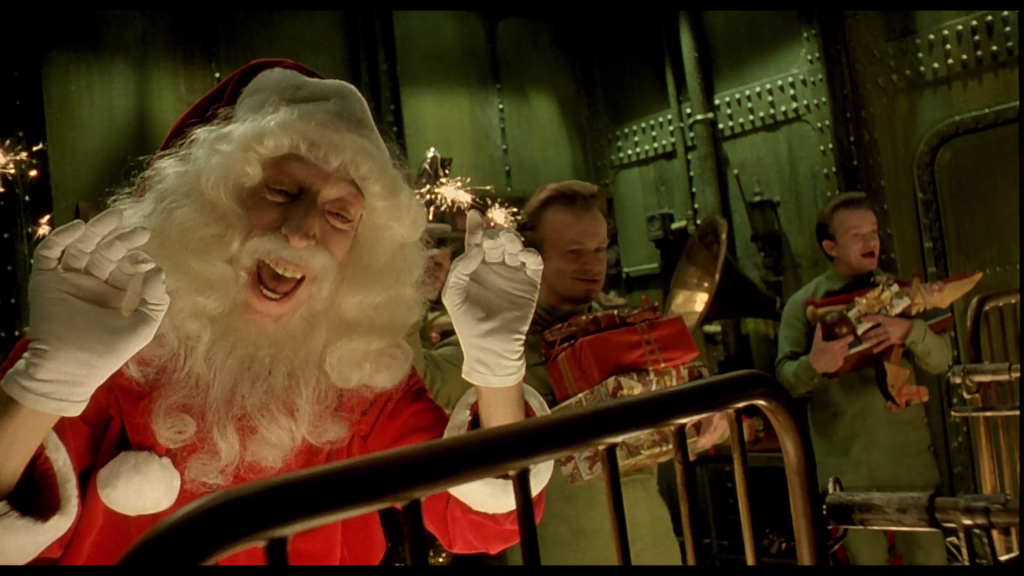 This is a French film that has a very retro-futuristic feel to it, but the themes and tech are very cyberpunk, there is even a brain in a vat. The story of The City of Lost Children follows One, played by Ron Perlman, who investigates the disappearance of children who are being kidnapped by a mad scientist so he can steal their dreams. 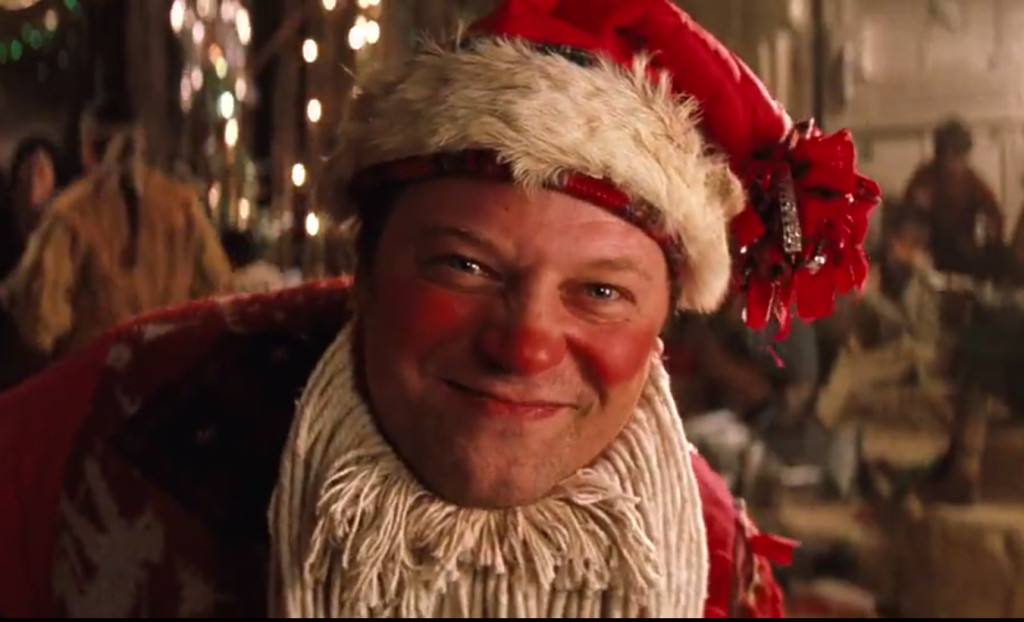 Soldier get an honorary spot on this list because of it’s references to Blade Runner. A spinner can be seen in one of the scenes amongst a refuse pile, and Tannhauser Gate is referenced as a battle the main character fought in. Kurt Russel plays Sgt. Todd 3465, a soldier that is thrown away when he is replaced with better soldiers. The story follows Todd coming to grips with a normal life after being raised to do nothing but kill and his subsequent PTSD. The story is set during Christmas on Arcadia 234, a waste disposal planet. 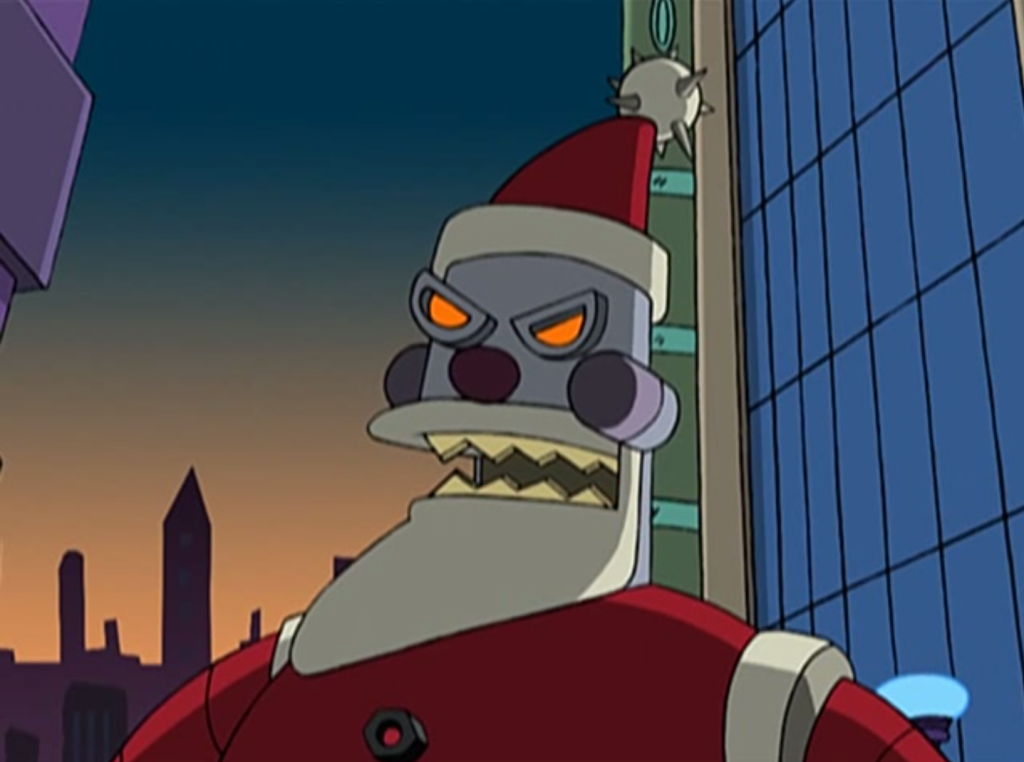 Futurama is not generally considered cyberpunk, but some of the episodes involving robots certainly verge on being cyberpunk. Robot Santa Claus goes on a rampage every Christmas punishing the naughty, because no one can meet the robot’s programmed standards for being nice. The character appears in three episode of the show: Xmas Story, A Tale of Two Santas, and The Futurama Holiday Spectacular. 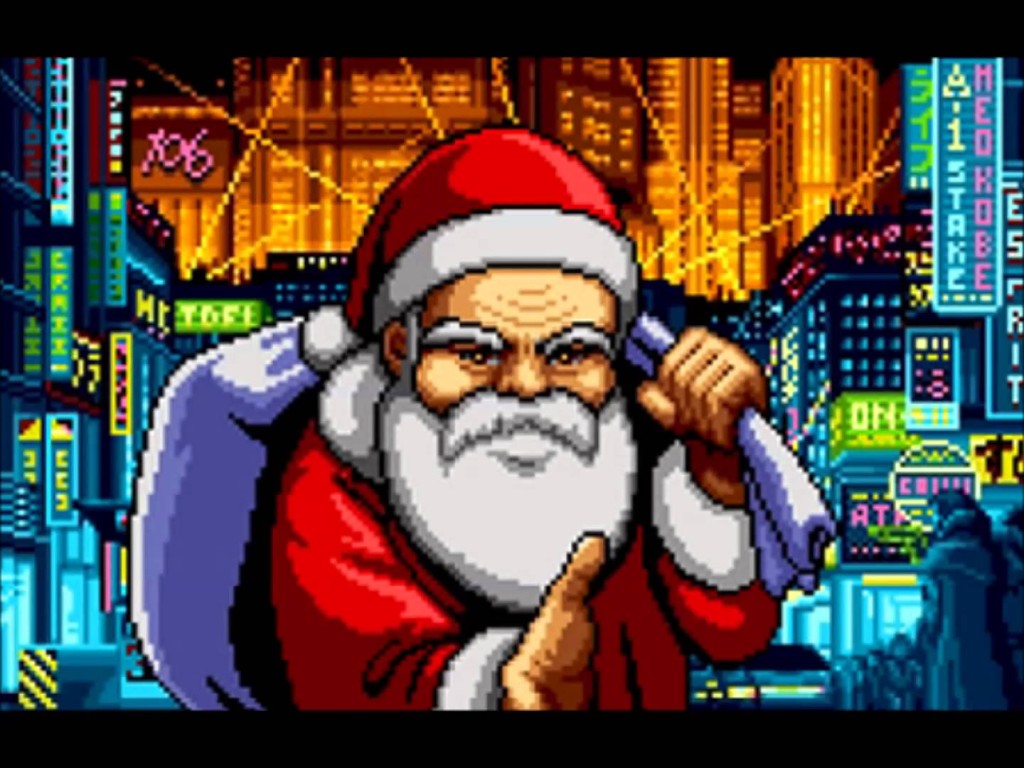 Snatcher, a video game created by Hideo Kojima (creator of Metal Gear), is a classic among fans of vintage cyberpunk games. There is a brief scene in the game where one of the areas is decorated for Christmas and Christmas music is playing in fantastic 8-bit style. 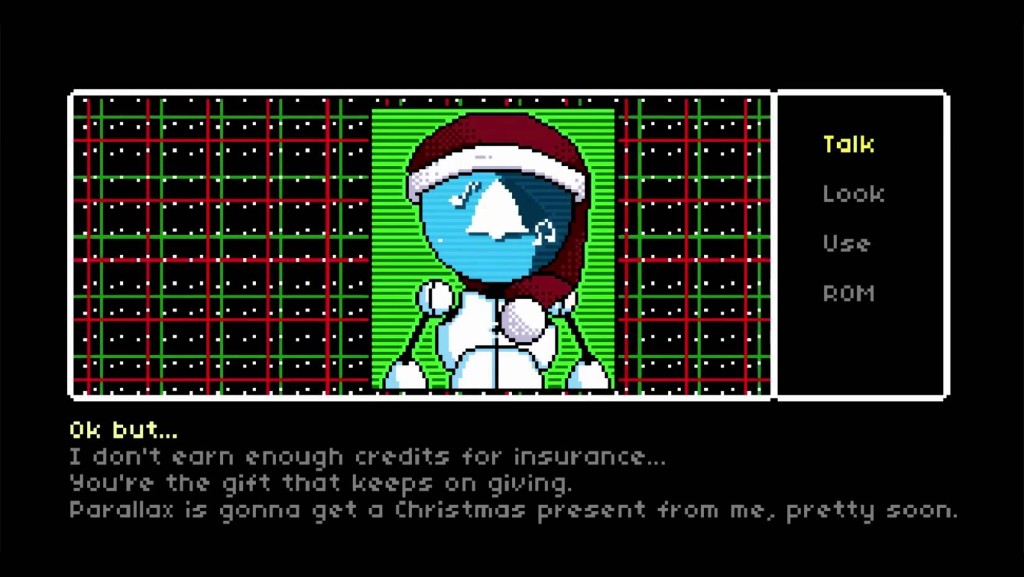 Read Only Memories is a video game that was inspired by cyberpunk video-game Snatcher, featured above, but also by other cyberpunk titles such as Bubblegum Crisis. The game is set during Christmas in 2064. 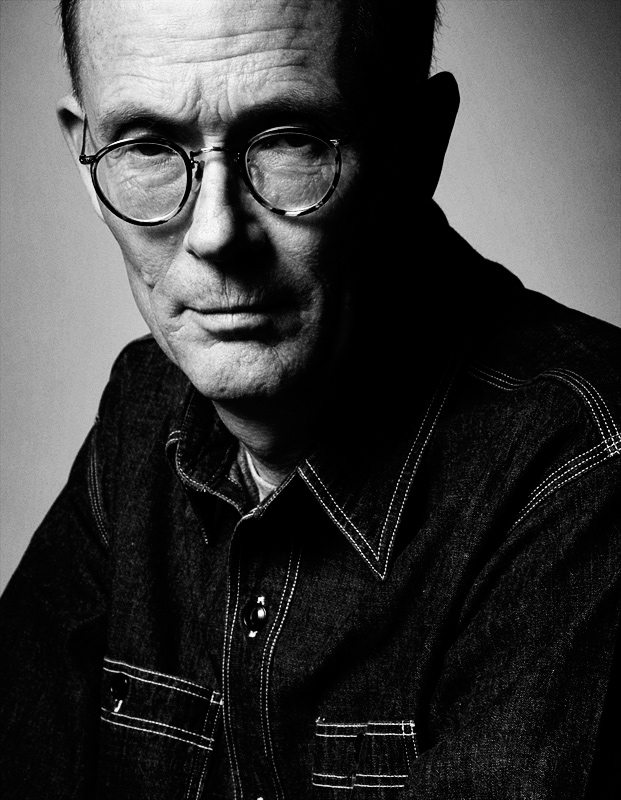 Wiliam Gibson, lauded as the creator of cyberpunk, wrote a short story called Cyber Claus. This story is 100% bonafide cyberpunk and it is awesome. I apologize for the quality of the link, I could only find a copy of the story on Gibson’s dead blog, here’s the link. Scroll down about half the page.

Merry Christmas from the Kensingtons by Lewis Shiner 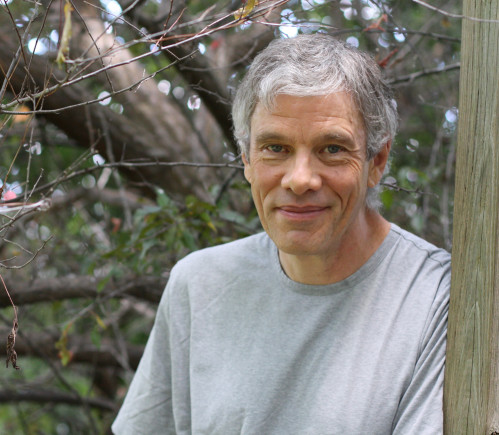 Lewis Shiner is one of the original cyberpunk authors who wrote along side William Gibson, and Bruce Sterling. He wrote a Christmas short story, that although not cyberpunk, is a great read. It is told through descriptions of Christmas cards and displays how families change over the years. Here is the link.

The Christmas Show by Pat Cadigan 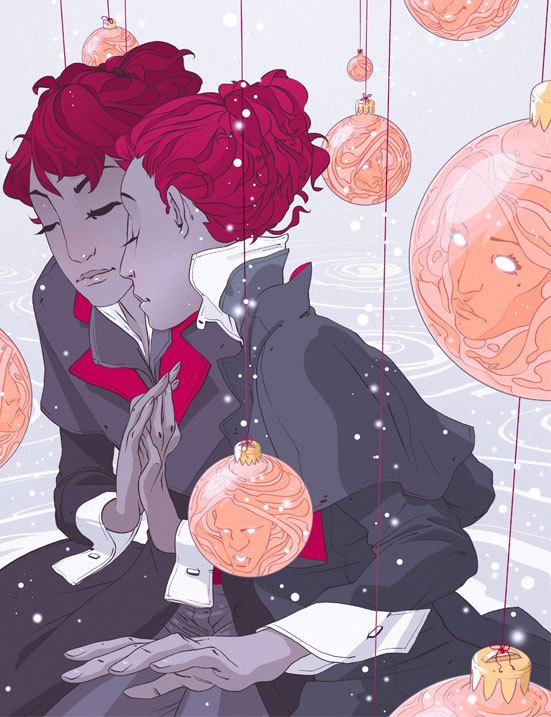 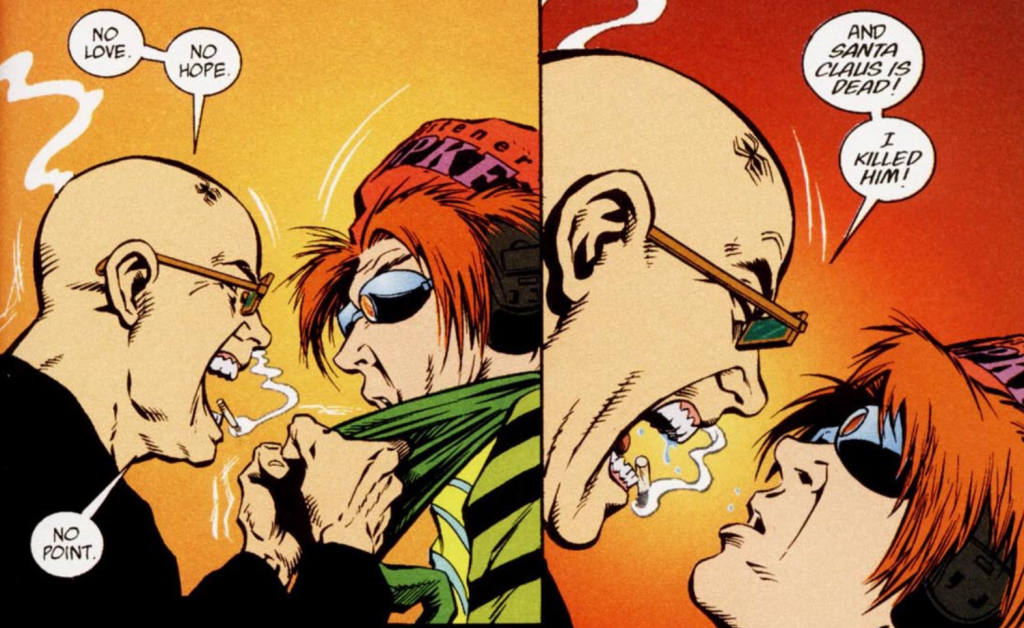 Transmetropolitan is an excellent cyberpunk comic by Warren Ellis and published by Veritgo (DC). The first Christmas Special carries the kind of nihilistic overtones one expects from Ellis, as well as the cyberpunk genre in general. The second is more hopeful and emphasizes that technology is making the world a better place. 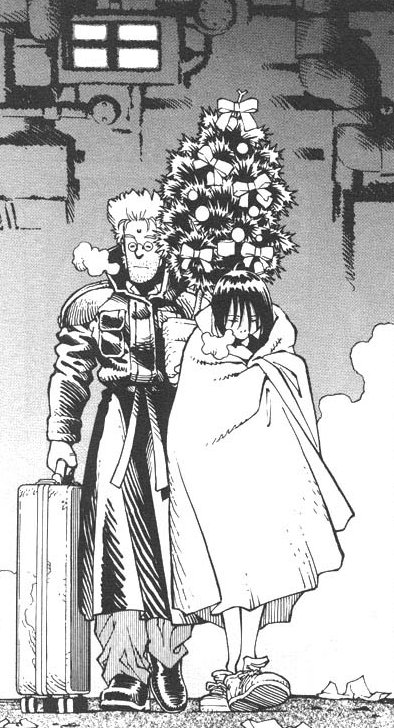 One of the companion mangas for Battle Angel Alita, also known as Gunnm, was called Another Stories. This was a series of short stories set in the Battle Angel Alita universe, but didn’t focus on the main character Alita (Gally). One of the short stories follows the doctor, Ido, as he attempts to help a young girl with his cybernetic skills and battles with love. Large parts of the story take place on two separate Christmases. 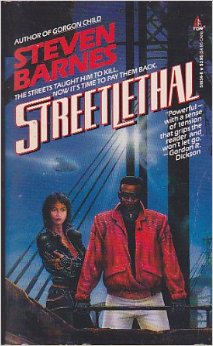 Street Lethal is a lesser known cyberpunk novel that follows the adventures of Aubry Knight who fights to get revenge against the Ortegas, a gang that framed him for a crime and landed him in prison. A portion of the story takes place in a mall in the Maze, part of Los Angles that fell underground after a massive earthquake. The mall is decorated heavily for Christmas, and supposedly is set during the season.

Drugs and Wires by Cryoclaire 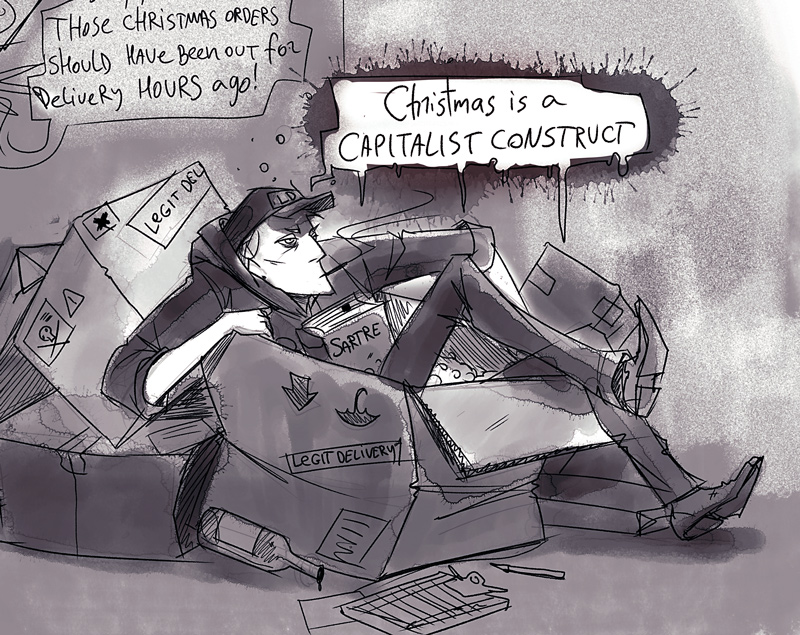 Cryoclaire of the Drugs and Wires webcomic has done some awesome cyberpunk pictures with a Christmas theme. They have an excellent nihilistic quality to them. The surveillance Christmas tree is available fro Cryoclaire’s store as a Christmas card. 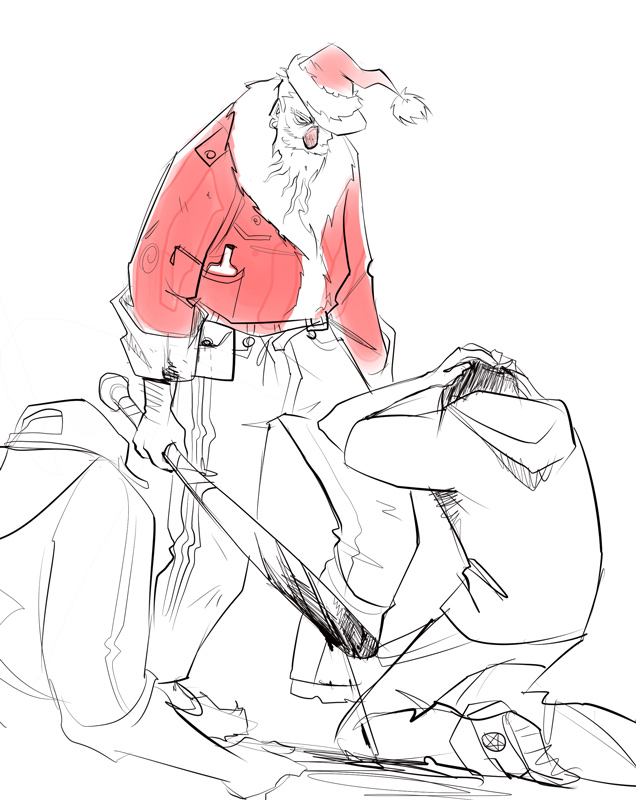 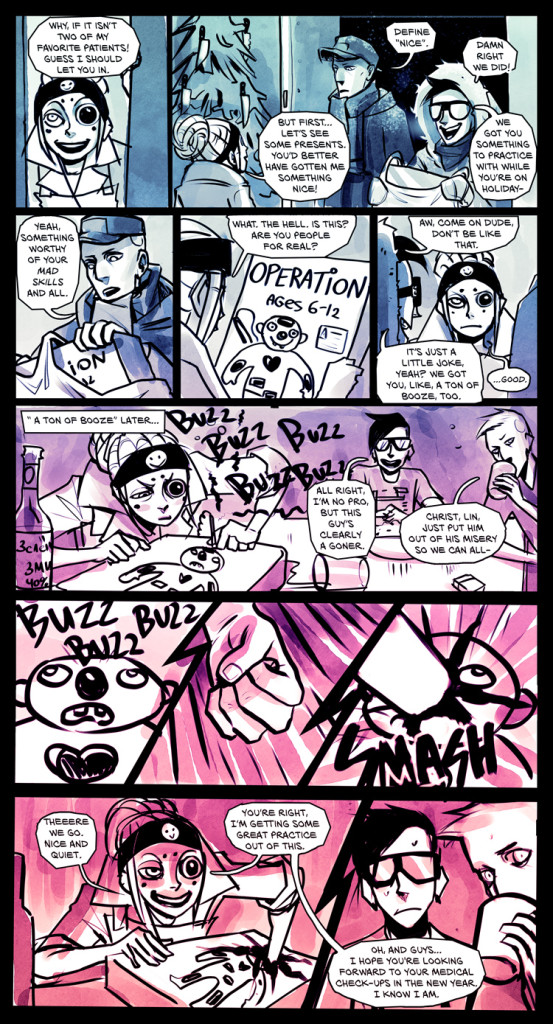 This list should bring some cyberpunk drear to your holiday season. You’re welcome.

Written by Isaac L. Wheeler (Veritas)
Veritas is a cyberpunk and writer who enjoys all aspects of the cyberpunk genre and subculture. He also journeys deeply into the recesses of the dissonance exploring his nihilistic existence. If you'd like to contact Isaac L. Wheeler (Veritas), the founder and editor-in-chief of Neon Dystopia, you can do so here: ilwheeler.founder@neondystopia.com
Previous ArticleThe Dose Makes The Poison: Uncanny Valley And Virtual RealityNext ArticleÆon Flux: Series Review (10/10)
You May Also Like 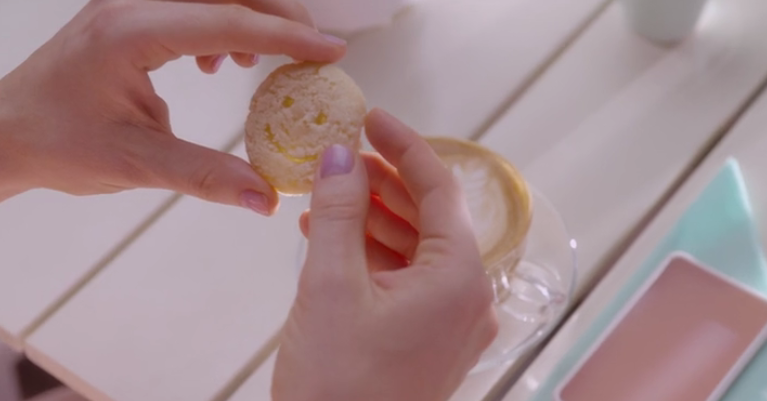 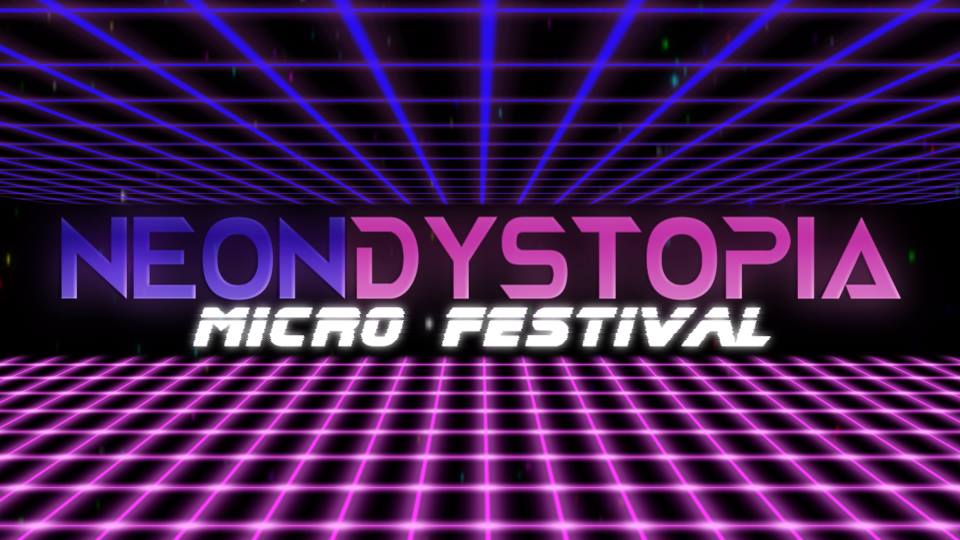 ‘She’s a character in a social narrative with no arc’: A Review of the Marlowe Kana Series
January 20, 2018
4 Comments