I have often thought of Shadowrun as the gateway drug to cyberpunk. If only I had nuyen for every person I coerced into playing Shadowrun as futuristic D&D, then dropped them into a hardcore cyberpunk adventure. Sure dragons, elves, and magic might show up but mostly as set dressings to entertain my fantasy-enthralled friends. Cyberbunk, a new webcomic on webtoon, really brings this feeling to the forefront.

The four major characters are a gnome by the name of Ian, a robot seemingly named Math, and two elves named Thame and Ranial. Ian is our viewpoint character who is a hacker. Shortly after his introduction, Ian activates Math after finding him derelict on the road. I suspect that as the story proceeds we will learn more about Math’s mysterious past. Ranial is a warrior who solves all of his problems with his swords. Thame, on the other hand, is an agent for a mysterious agency called the Living Eye (or perhaps an actual living eye?), who is looking for something called Facility X.

The story so far follows our characters meeting and going on a mission to find a Doctor MacGuffin who apparently knows the location of Facility X. He is killed however, by a robot working for The Forge. The Forge is a robot terrorist group that is hell bent on killing organics. Our party is blamed for MacGuffin’s death and brought in by some obscure authority. Apparently, Thame is also the nephew of one of these mysterious authorities. I  am excited to see where the story goes from here.

Another fun aspect of Cyberbunk is random references to science fiction. Part of the opening takes place in a noodle shop taken straight from Blade Runner, we see a reference to Fallout 3’s targeting system, the word Frak is a reference to Battlestar Galactica, and even Doctor MacGuffin’s name is a reference to a concept used in science fiction called a MacGuffin, which is when a technology (or other plot device) exists not because it is scientifically plausible, but to drive forward the story. These references add a humorous spice to a comic that takes itself seriously otherwise. 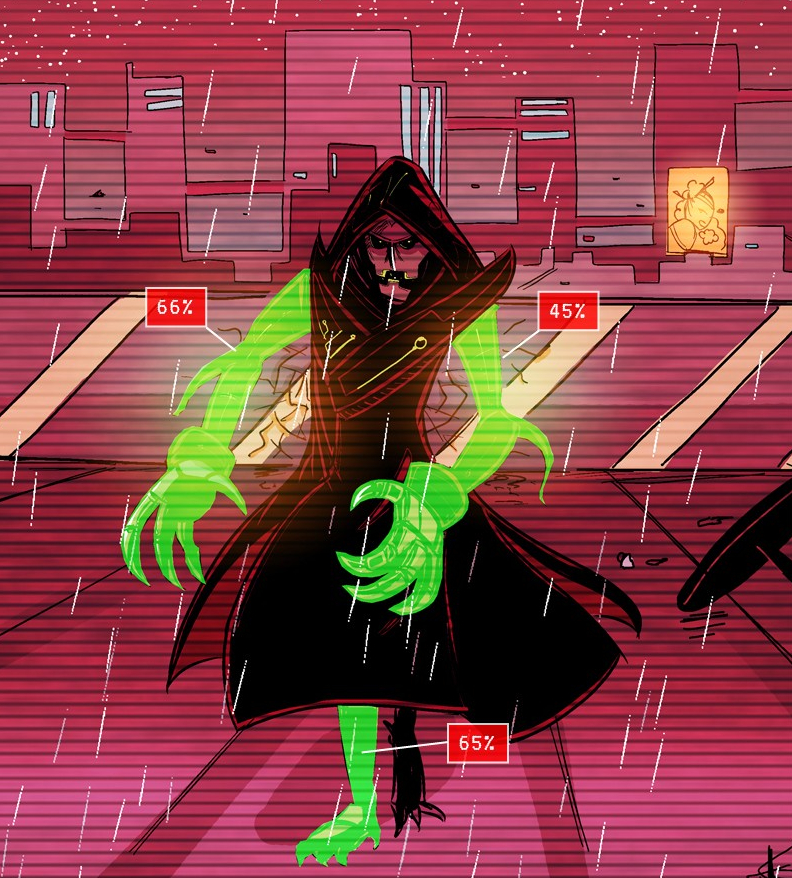 Cyberbunk was created by Bradley Mason, written by Sam Machado, and illustrated by Cynthia Sousa and Amanda Sousa Machado. Cyberbunk is updated every Tuesday.

Written by Isaac L. Wheeler (Veritas)
Veritas is a cyberpunk and writer who enjoys all aspects of the cyberpunk genre and subculture. He also journeys deeply into the recesses of the dissonance exploring his nihilistic existence. If you'd like to contact Isaac L. Wheeler (Veritas), the founder and editor-in-chief of Neon Dystopia, you can do so here: ilwheeler.founder@neondystopia.com
Previous ArticleComptroller – Blue Video Romance ReviewNext ArticleReview: Orphan Black Season 3
You May Also Like

‘What could be a more genuine case than a murder investigation?’: A Review of Independent Investigators Inc.
September 7, 2016
2 Comments