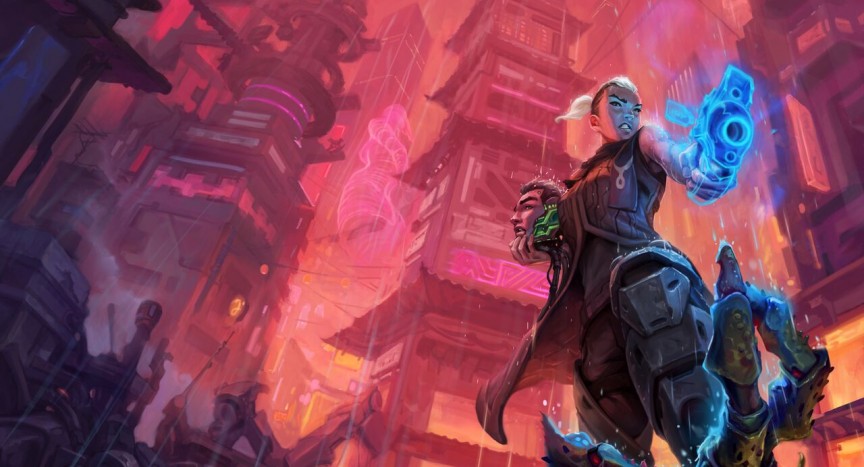 Man, it hasn’t even been a year and Warren Hammond and Josh Viola have given us another blessing in their new entry into the Mars-based cyberpunk series Denver Moon. Including a graphic novel prequel, a soundtrack, short stories, PS4 themes, and even an IPA (unfortunately no longer in production). Denver Moon is about one tabletop or video game short of being an independent multimedia franchise on par with a cult TV series. My own introduction to the series was through The Saint of Mars, which is released today through Hex Publishers. It’s a short novel that reads like a fast-paced conspiracy thriller, complete with sci-fi twists and cataclysmic stakes. While not perfect, The Saint of Mars follows the neo-noir format well and blends dystopian fiction with a touch of the fantastic without departing from its cyberpunk basis, and represents a new addition to the growing list of gritty crime fiction set beneath the harsh, red sands of our celestial post-Earth refuge.

Denver Moon is set in a bleak Martian future reminiscent to that of Blade Runner—Earth has been ecologically devastated, prompting a mass colonization effort of a crowded, largely-subterranean city plagued by dust storms. Of course, the red film of dust cannot be fully perceived by Denver Moon, P.I., who finds her monochromatic eyesight to be an advantageous version of eagle-eye detection, picking up on vital details that those without her so-called disability can’t. This first aids Denver in tracking down a group of missing individuals involved in a case commissioned by an anonymous client, in which she discovers a hidden laboratory in which seemingly-random civilians are rounded up and dismantled as part of sinister alien experimentation to conquer the human mind. These aliens are shapeshifters, able to near-perfectly imitate the human form save for a slight reflection of the retina that can only be seen in monochrome (and may be another nod to Blade Runner).

After a risky maneuver by Smith, an AI implanted with Denver’s grandfather’s memories housed within a seriously modded revolver, the duo treat the alien running the clandestine lab to the big sleep. Afterward, Denver juggles her investigation into the alien plot to terraform Mars and subsequently enslave the human race with a task from another client, android brothel owner Jard. Jard has been having some trouble with the Church of Mars, an organized religion that lives in the shadow of the sins the corporations of the past have committed against Earth and views androids (or “botsies”) as humanity’s successors, rallying for their emancipation. Jard, however, doesn’t appreciate being caught in the church’s crosshairs, as he views himself as benevolent towards his bots, who are overall treated as something between slaves and second-class citizens. His solution: have Rafe Ranchard, a corrupt bishop in the Church of Mars with major political sway, excommunicated. Denver’s price is Nigel, a British-accented botsie whose body was never replaced after the events of The Minds of Mars.

Denver soon comes to realize that both cases she’s working are connected after learning that Rafe is poisoning Hennessey, the church’s Peerless Leader, and seemingly seeks to erase any evidence of extraterrestrial threats. Finding the lab converted into an automated sweatshop, Denver is confronted by an enigmatic mercenary named Ace. Following a lead she drops, Denver then attempts to infiltrate the Church of Mars through Nigel, whom she arranges to be handed off in the Earth Park, the only place on Mars designed to simulate their ruined planet’s past environment. Naturally, this is merely a ploy, and Denver finds herself ambushed and outmatched by a group of androids sent by Ranchard. Before they have the chance to kill her, however, Ace shows up and blows the botsies away with a weapon of alien origin, smuggling Denver into a secret tunnel system winding throughout Mars City.

Denver wakes, repaired by nanomachines and in the care of her grandfather, Tatsuo Moon, who submitted Mars’ fate to the aliens after learning of their existence and the terraforming technology that would save humanity from collapse. Denver soon learns that her grandfather is still in cahoots with the alien in charge of the effort to crack the human mind that goes by the human name Doctor Werner. The doctor reveals that he was the one who hired Denver to find the lab in the opening chapters in an attempt to rein in political control of Mars. He then hires Denver to exterminate Ranchard, whom they agree represents the greatest threat to Mars’ infrastructure at this time.

Denver is then accompanied by Ace through the tunnel system to a massive underground chamber, a reflecting pool that stretches for kilometers and serves as a meditation chamber for the Peerless Leader. There, she finds what she expects; Ranchard has Hennessey strung up on a contraption that is slowly siphoning his life, and there he waits for Hennessey’s final breath in order to be officially named Peerless Leader. However, it turns out Ranchard has been partaking in some serious body-modding in his off hours–his entire body has been replaced with next-gen android tech, which he uses to get the drop on Denver and Ace. Nigel is also there, reprogrammed to follow Ranchard’s commands. Finding herself trapped and separated from Smith and Ace, Denver only has one chance to liberate Mars from the tyranny of the sociopathic Ranchard.

As a newcomer to the Denver Moon series, I think The Saint of Mars has a lot to offer, but stumbles in its execution. There are a multitude of promising elements, offering us insights into the future of extraplanetary colonization, religion, and free will. The religion angle was particularly fascinating to me; dominating a large percentage of Mars’ populace, the Church of Mars seems to hold political sway similar to the Catholic church from the medieval period through the Renaissance, centered around penitence in a fashion comparable to the animosity surrounding the fall of the Roman Empire and pagan religions. However, this neo-religion doesn’t feel antiquated in any manner aside from conservative superstition–aside from references to gods that are never fully explained, the church attempts to propel humankind into the future by any means necessary. The imagery conveys a sci-fi twist on religion, lying bare the parlor tricks and conditioning associated with organized cults. For instance, during a congregation Denver attends, Ranchard ascends a staircase to a high pedestal that is made to appear invisible to the naked eye. My favorite quote from this scene is transmitted by Smith:

“In times like these, the message doesn’t matter as much as the messenger. They’ll believe anything that comes off the tongue of somebody who promises to deliver them from their pain.”

Denver’s own relationship with her robotic companions is also worth mention: the general climate of Mars seems torn between liberation of the botsies and keeping them on a leash. Denver seems to fluctuate between states, treating Smith and Nigel as sentient beings with lives of value while also using them as tools for her own ends. The short novel toys with themes of control in this neo-feudal world–while the humans have power over their artificially-intelligent serfs, humankind is also subject to oppression by the alien empire, who dictate human affairs from afar. The aliens take the role that megacorporations typically fulfill in traditional cyberpunk–a manipulative organization that subjects the people in its care to obscene cruelty in the pursuit of a more sinister form of domination, but without the structure it provides would surely lead to societal implosion. This dynamic between oppressor and the oppressed is ripe with the deconstruction of what it means to have free will, and it’s just waiting to be plucked.

Unfortunately, though, I found these thematic elements somewhat lacking in follow-through, largely due to how Hammond and Viola approach their writing. I freely admit my bionic heart is cold and unforgiving when it comes to how a story treats its characters, and I might have missed out on a data cache of intensive world-building and description contained in Denver Moon: The Minds of Mars. However, the way Viola and Hammond handle their lore is inconsistent–at times, they remind readers of information from earlier in the book that is not directly pertinent to the scene in what seems to be attempts at raising the emotional stakes, while at others they don’t do quite enough to give readers a clear enough picture of what happens in the present moment or has happened in stories preceding their latest entry. The biggest offender is a scene in which Denver revisits an apartment belonging to characters known as Stieg and Ana, who were featured in the graphic novel prequel, Metamorphosis. There is so little context revolving around who Stieg and Ana are that it becomes necessary to read Metamorphosis to understand, and that left me fairly confused as a reader–less so in terms of context upon brushing up on Denver Moon’s lore, and more so in terms of what the writers are trying to accomplish with their storytelling format.

Ultimately, the construction of The Saint of Mars feels rushed to me. Hammond and Viola rarely take time with significant moments, and that sometimes robs the story of physical and emotional stakes. But perhaps this was their way of keeping the story moving at a quick pace. Like I said before, the novel and the series it’s a part of have serious potential through the ideas it puts forth. If you’re already a fan of Denver Moon or just like your cyberpunk fast and bloody, I recommend The Saints of Mars. And, despite my criticisms, I’m still looking forward to what the authors have in store for Denver Moon.

If you’d like to purchase a copy of The Saint of Mars, you can do so here. If you’re new to the series and would like to dive a little deeper, consider our review of The Minds of Mars.

Comment below for a chance to win a physical copy of Denver Moon: the saint of Mars and a music soundtrack! You must reside in the USA, have commented below, and be able to provide a mailing address upon winning. Winners will be announced in one weeks time, so stay tuned!

Written by shadowlink
shadowlink is lost in a sea of information. Cyberpunk helps him cope with his constant future shock.
Previous Article“You work with what you got, not what you hoped for.” – Review of Hotel Artemis (2018)Next ArticleSoundtracks to a Dying World: Summer Singles
You May Also Like 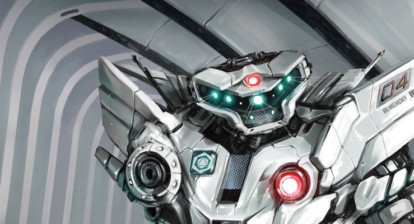