Josh Finney is the cyberpunk comic book creator who brought us Utopiates, which we recently wrote about here. Together with the co-creator of Utopiates Kat Rocha, they created a publishing company called 01 Publishing. Utopiates was the first title that they released, but many more have followed such as the most recent titles of Case File: Arkham and World War Kaiju. Finney agreed to talk with us about Utopiates, cyberpunk, and more. 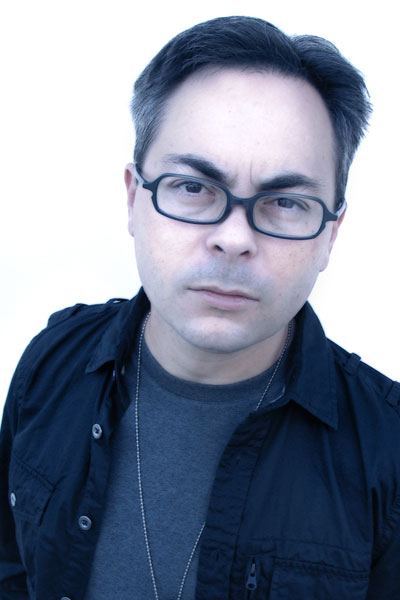 Neon Dystopia: What was the inspiration for Utopiates?

Josh Finney: Utopiates was a collision of many influences, some sourcing from real-life experience, some from a longtime love of cyberpunk fiction. The story began when I was sitting in a college math course, bored out of the my skull, and I jotted down the following: “I was sixteen when I bought my first memory.” From that sprung the first Utopiates story, “A Moment of Clarity,” about a street kid who is hooked on a drug that makes him believe he’s got a family who gives a damn about him.

At its heart, Utopiates is about incomplete people who are searching for something—be it escape, or meaning, or themselves. When I was younger I was deep into the goth/punk counterculture and it was common to cross paths with gutter punk—kids from broken homes who willing chose to live on the streets, usually in a “tribe” of fellow runaways. The nameless youth in the first Utopiates tale is deeply informed by those experiences. Also related to the goth/punk scene was my time in the music industry. Through the early 1990s I was a music journalist, as well as an employee of 21st Circuitry Records—San Francisco’s premier industrial music label. During that time I met a lot of amazing people, people who had everything going—talent, fame, you name it. So it was shocking to discover how rampant heroin addiction was. And many of them paid the price for that addiction. In that way, Utopiates was my way of making sense of that addiction. What was it that was missing in these people that drove them to a drug that would eventually consume them. Also, keep in mind, this was the 90s when a needle addiction was an almost sure-fire path to HIV (and death).

So yeah, Utopiates came from some rather dark places.

Josh Finney: For me is it all goes by the Holy Trinity of 80s cyberpunk: Blade Runner, Neuromancer, and Max Headroom. A film, a novel, and a television show—these were the DNA that formed the ongoing evolution of the genre to this day. Being exposed to them at a relatively early age had a massive impact on me. Later, I would add the films of Mamoru Oshii (Ghost in the Shell) and the novels of Jeff Noon (VURT) to that list, but it all began with the trinity.

Josh Finney: Utopiates was created via a highly convoluted process of penciling, digital painting, photo reference using models, photo manipulation, and even a little 3D rendering. Kat and I essentially developed the style specifically for the book—which was probably more complicated than it needed to be. But hey, we were young and ambitiousness, and completely obsessed.

ND: Will you be returning to the world of Utopiates?

Josh Finney: I would so love to go back to Utopiates. The series was always intended as an ongoing collection of vignettes that tied into the larger mythology of the “Prophet” character. I always envisioned her as being something akin to the Slender Man—part urban legend, part hallucination, part real-life horror. She isn’t entirely real, but rather an entity that came into being due to people’s collective need for her to be. In William Gibson’s short story “The Gernsback Continuum” he called such beings “semiotic phantoms”. In terms of Utopiates continuing, I have another ten tales mapped out. All that’s missing is an audience hungry enough for it to fund a Kickstarter.

As much as it pains me to say, the current crop of kids calling themselves “cyberpunk” seem to believe being cyberpunk means not paying for things. Utopiates has an audience. A fairly large one, in fact. And I’ve had plenty of requests for a second book. The problem come down to piracy. The sheer number of twerps I’ve encountered who’ve flat out told me they read Utopiates via torrent and were anxiously awaiting for the “next book to be ripped and posted” is staggering. Being a writer is not an easy life, especially when you’re not churning out mainstream, politically-correct, rated PG-13 crap. Without the support of fans, my books cannot exist. Similarly, there had been plans to do a full-cast audio drama of Utopiates, which would feature new stories. The project was going to be co-produced with Audio Comics, the team behind my Titanium Rain audio drama. It was to star the voice of Aeon Flux, Denise Poirier, and feature an original soundtrack by 90s industrial bands New Mind and Bio-Tek. Just like the prospect of a second Utopiates graphic novel, there was a lot of excitement from fans, but little actual support.

No funding, no book. It’s fairly simple math. It’s one of the reasons I’ve written more horror as of late. Horror audiences have a deep appreciation for the entertainment they consume, and when they find a creator they like, they support them to the fullest. If fans want something, they need to support it with their dollars.

Trust me, if I could get the funding to do more cyberpunk projects, I’d do it in heartbeat. In fact, it’s about all I would do.

ND: Utopiates was your first publication under 01 Publishing, which you founded together in 2011, what challenges have you faced running you own publication company? What is the best part of running your own enterprise?

Josh Finney: Well, truth be told, 01Publishing was co-created by me, but it is Kat Rocha baby. I spend most of my time writing / creating. The best part of being with 01Pubishing? Two things, the first being creative freedom. With 01Publishing there is no censorship of my work, no demands from editorial to “dumb things down” or make a story “kid friendly”. In the current publishing climate in comics the material I write would be chopped to hell and made “politically correct” if I were working with another company. 01Publishing’s motto is “No Safe Space”. These are books for intelligent adults who demand quality content. If you’re the kind who needs a safe space, our books aren’t for you.

ND: Josh, you wrote an article for us last year expressing your opinion on the state of the punk suffix in literature. How do you feel about the state of punk literature today?

Josh Finney: Now remember when the punk suffix had no future? Well, this is it. Right! Next up, more of the same.

ND: What are your upcoming projects?

Josh Finney: Currently I’ve got a Kickstarter going for the next installment of Casefile: ARKHAM. The short pitch for the series is, “What if Raymond Chandler had written stories set in H.P. Lovecraft’s mythos universe. Set in the mid-1940s, the series follows Hank Flynn, a down on his luck private eye who is back from the war and now working the mean streets of the most cursed city on Earth—Arkham, Massachusetts. Haunted by the memories of war and at odds with a city that grows more dangerous by the day, Flynn is required to peel away the thin veil of reality to confront terrors of the Outer Dark. This isn’t yet another “monster hunter” book masquerading as detective story.

On the surface, Casefile: ARKHAM plays as a straight-ahead hardboiled pulp noir, where bullets are cheap, life is cheaper, and the most dangerous monster is still man. The horror elements intentionally subtle, lurking in the background. Think Angel Heart and The Lord of Illusion, opposed to say Constantine or The Dresden Files.

ND: Is there anything else that you would like to tell us?

You can read a preview of Utopiates here.

You can purchase physical copies of Utopiates from Amazon or 01 Publishing directly.

You can purchase digital copies of Utopiates for the Nook, Kindle, Kobo, or as a PDF.

Written by Isaac L. Wheeler (Veritas)
Veritas is a cyberpunk and writer who enjoys all aspects of the cyberpunk genre and subculture. He also journeys deeply into the recesses of the dissonance exploring his nihilistic existence. If you'd like to contact Isaac L. Wheeler (Veritas), the founder and editor-in-chief of Neon Dystopia, you can do so here: ilwheeler.founder@neondystopia.com
Previous ArticleLast Week in Cyberpunk 9/16/2016Next ArticleMr. Robot’s Python Approach
You May Also Like